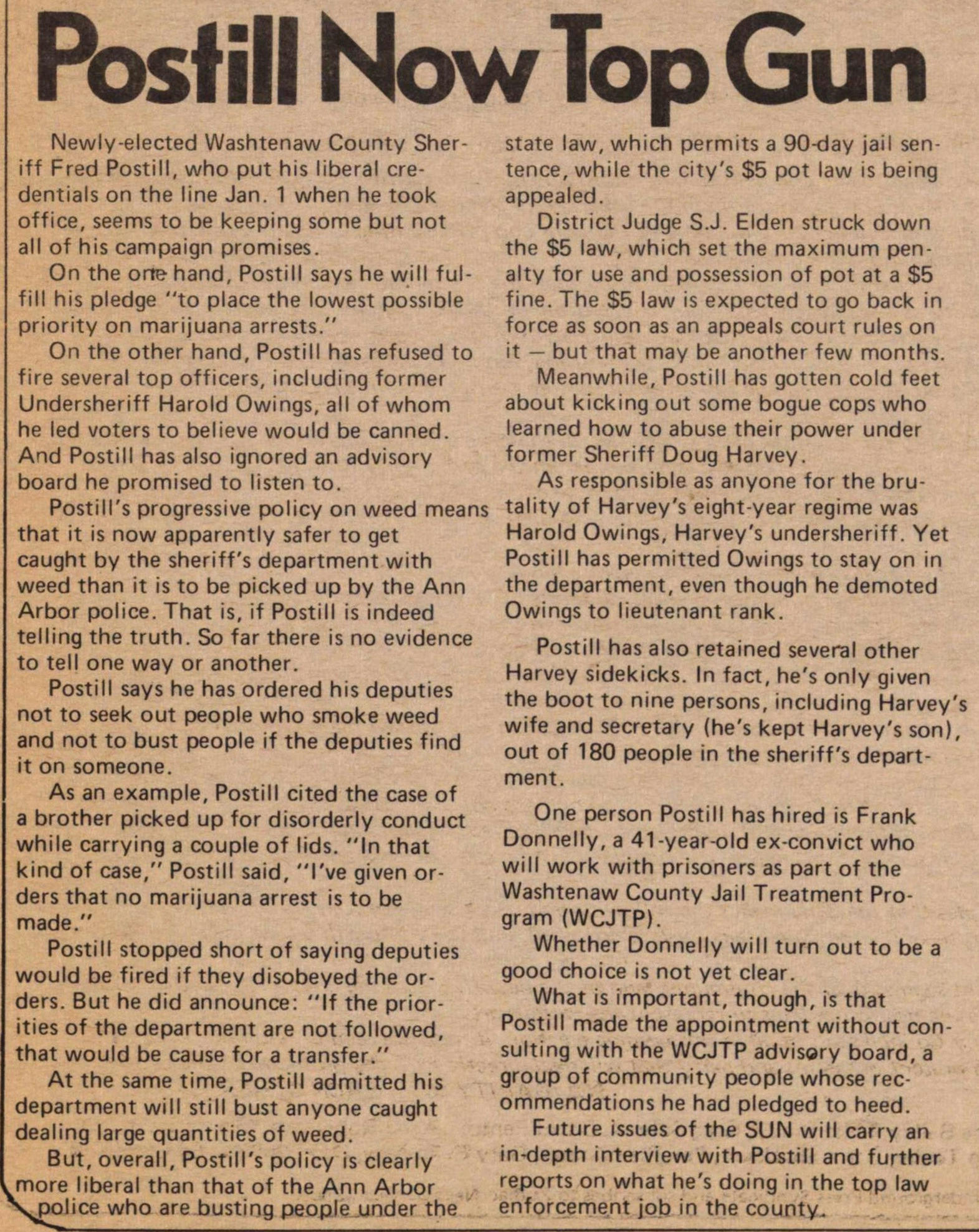 Newly-elected Washtenaw County Sheriff Fred Postill, who put his liberal credentials on the line Jan. 1 when he took office, seems to be keeping some but not all of his campaign promises.

On the one hand, Postill says he will fulfill his pledge "to place the lowest possible priority on marijuana arrests."

On the other hand, Postill has refused to fire several top officers, including former Undersheriff Harold Owings, all of whom he led voters to believe would be canned. And Postill has also ignored an advisory board he promised to listen to.

Postill's progressive policy on weed means that it is now apparently safer to get caught by the sheriff's department with weed than it is to be picked up by the Ann Arbor police. That is, if Postill is indeed telling the truth. So far there is no evidence to tell one way or another.

Postill says he has ordered his deputies not to seek out people who smoke weed and not to bust people if the deputies find it on someone.

As an example, Postill cited the case of a brother picked up for disorderly conduct while carrying a couple of lids. "In that kind of case," Postill said, "I've given orders that no marijuana arrest is to be made."

Postill stopped short of saying deputies would be fired if they disobeyed the orders. But he did announce: "If the priorities of the department are not followed, that would be cause for a transfer."

At the same time, Postill admitted his department will still bust anyone caught dealing large quantities of weed.

But, overall, Postill's policy is clearly more liberal than that of the Ann Arbor police who are busting people under the state law, which permits a 90-day jail sentence, while the city's $5 pot law is being appealed.

District Judge S.J. Elden struck down the $5 law, which set the maximum penalty for use and possession of pot at a $5 fine. The $5 law is expected to go back in force as soon as an appeals court rules on it -- but that may be another few months.

Meanwhile, Postill has gotten cold feet about kicking out some bogue cops who learned how to abuse their power under former Sheriff Doug Harvey.

As responsible as anyone for the brutality of Harvey's eight year regime was Harold Owings, Harvey's undersheriff. Yet Postill has permitted Owings to stay on in the department, even though he demoted Owings to lieutenant rank.

Postill has also retained several other Harvey sidekicks. In fact, he's only given the boot to nine persons, including Harvey's wife and secretary (he's kept Harvey's son), out of 180 people in the sheriff 's department.

One person Postill has hired is Frank Donnelly, a 41-year-old ex-convict who will work with prisoners as part of the Washtenaw County Jail Treatment Program (WCJTP).

Whether Donnelly will turn out to be a good choice is not yet clear.

What is important, though, is that Postill made the appointment without consulting with the WCJTP advisory board, a group of community people whose recommendations he had pledged to heed.

Future issues of the SUN will carry an in-depth interview with Postill and further reports on what he's doing in the top law enforcement job in the county.