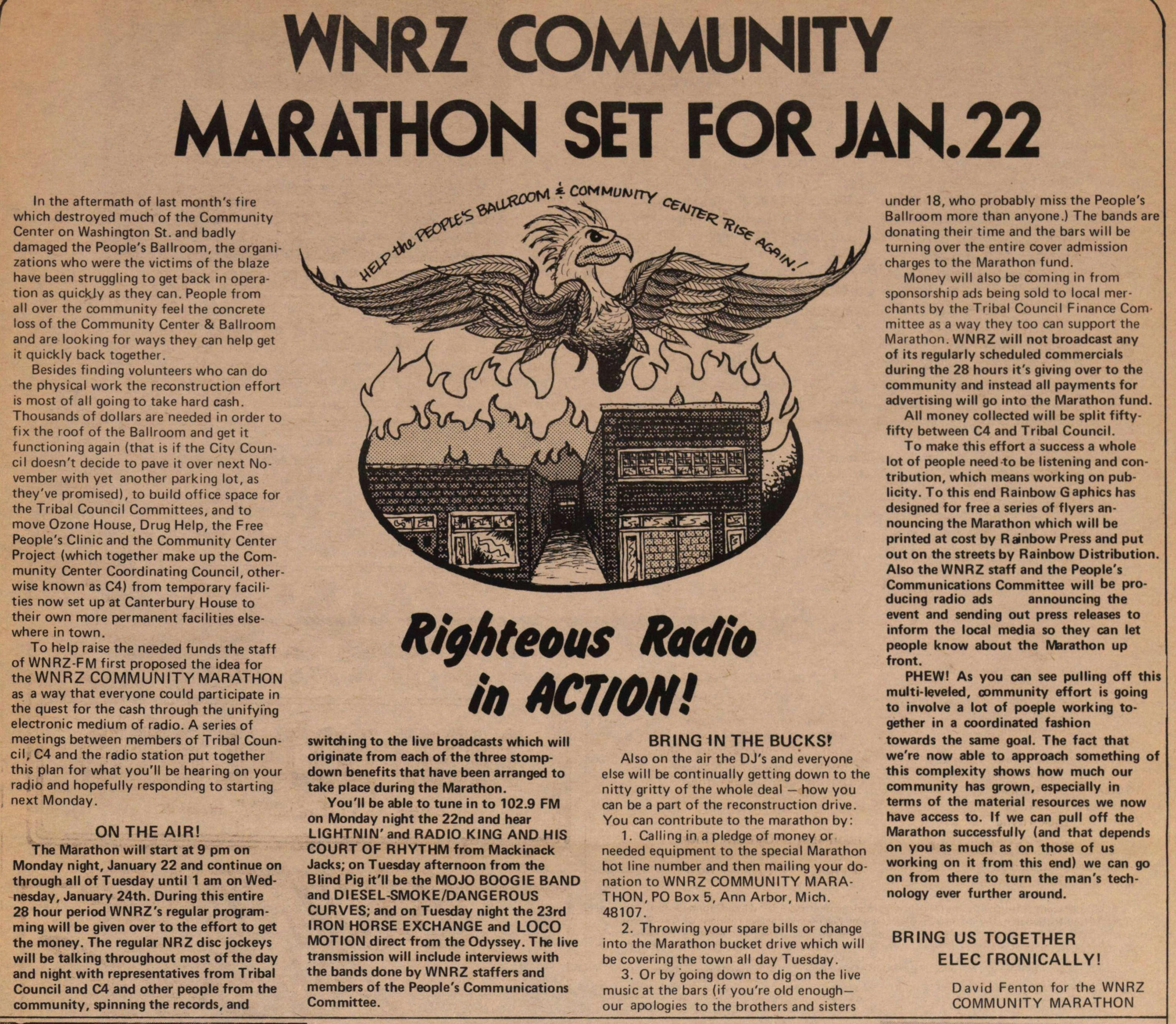 In the aftermath of last month's f re which destroyed much of the Community Center on Washington St. and badly damaged the People's Ballroom, the organizations who were the victims of the blaze have been struggling to get back n operation as quickjy as they can. People from all over the community feel the concrete loss of the Community Center & Ballroom and are looking for ways they can help get it quickly back together. Besides finding volunteers who can do the physical work the reconstruction effort is most of all going to take hard cash. Thousands of dollars are needed in order to fix the roof of the Ballroom and get it functioning again (that is if the City Council doesn't decide to pave it over next November with yet another parking lot, as they've promised), to build office space for the Tribal Council Committees, and to move Ozone House, Drug Help, the Free People's Clinic and the Community Center Project (which together make up the Community Center Coordinating Council, otherwise known as C4) from temporary facilities now set up at Canterbury House to their own more permanent facilities elsewhere in town. To help raise the needed funds the staff of WNRZ-FM first proposed the idea for the WNRZ COMMUNITY MARATHON as a way that everyone could particípate in the quest for the cash through the unifying electronic medium of radio. A series of meetings between members of Tribal Council, C4 and the radio station put together this plan for what you'll be hearing on your radio and hopefully responding to starting next Monday. ON THE AIR! The Marathon will start at 9 pm on Monday night, January 22 and continue on through all of Tuesday until 1 am on Wednesday, January 24th. During this entire 28 hour period WNRZ 's regular program - ming will be given over to the effort to get the money. The regular NRZ disc jockeys will be talking throughout most of the day and night with representatives from Tribal Council and C4 and other people from the community, spinning the records, and switching to the live broadcasts which will origínate from each of the three stompdown benefits that have been arranged to take place during the Marathon. You'll be able to tune in to 102.9 FM on Monday night the 22nd and hear LIGHTNIN' and RADIO KING AND HIS COURT OF RHYTHM from Mackinack Jacks; on Tuesday afternoon from the Blind Pig it'll be the MOJO BOOGIE BAND and DIESEL-SMOKEDANGEROUS CURVES; and on Tuesday night the 23rd IRON HORSE EXCHANGE and LOCO MOTION direct from the Odyssey. The live transmission will include interviews with the bands done by WNRZ staf f er s and members of the People's Communications Committee. BRINGINTHEBUCKSr Also on the air the DJ's and everyone else will be continually getting down to the nitty gritty of the whole deal - how you can be a part of the reconstruction drive. You can contribute to the marathon by: 1 . Calling in a pledge of money or needed equipment to the special Marathon hot line number and then mailing your donation to WNRZ COMMUNITY MARATHON, PO Box 5, Ann Arbor, Mich. 48107. 2. Throwing your spare bilis or change into the Marathon bucket drive which will be covering the town all day Tuesday. 3. Or by going down to dig on the live music at the bars (if you're old enough - our apologies to the brothers and sisters under 18, who probably miss the People's Ballroom more than anyone.) The bands are donating their time and the bars will be turning over the entire cover admission charges to the Marathon fund. Money will also be coming n from sponsorship ads being sold to local merchants by the Tribal Council Finance Committee as a way they too can support the Marathon. WNRZ will not broadcast any of ts regularly scheduled commercials during the 28 hours it's giving over to the community and instead all payments for advertising will go into the Marathon fund. All money collected will be split fiftyfifty between C4 and Tribal Council. To make this effort a success a whole lot of people needto be listening and contribution, which means working on publicity. To this end Rainbow Gaphics has designed for free a series of f lyers announcing the Marathon which will be printed at cost by Rainbow Press and put out on the streets by Rainbow Distribution. Also the WNRZ staff and the People's Communications Committee will be producing radio ads announcing the event and sending out press releases to inform the local media so they can let people know about the Marathon up front. PHEW! As you can see puiling off this multi-leveled, community effort is going to involve a lot of poeple working together in a coordinated fashion towards the same goal. The fact that we're now able to approach something of this complex ity shows how much our community has grown, especially in terms of the material resources we now have access to. If we can pull off the Marathon successfully (and that depends on you as much as on those of us working on it from this end) we can go on from there to turn the man's technology ever further around. BRING US TOGETHER ELEC TRONICALLY! Righteous Radto il ACTON!