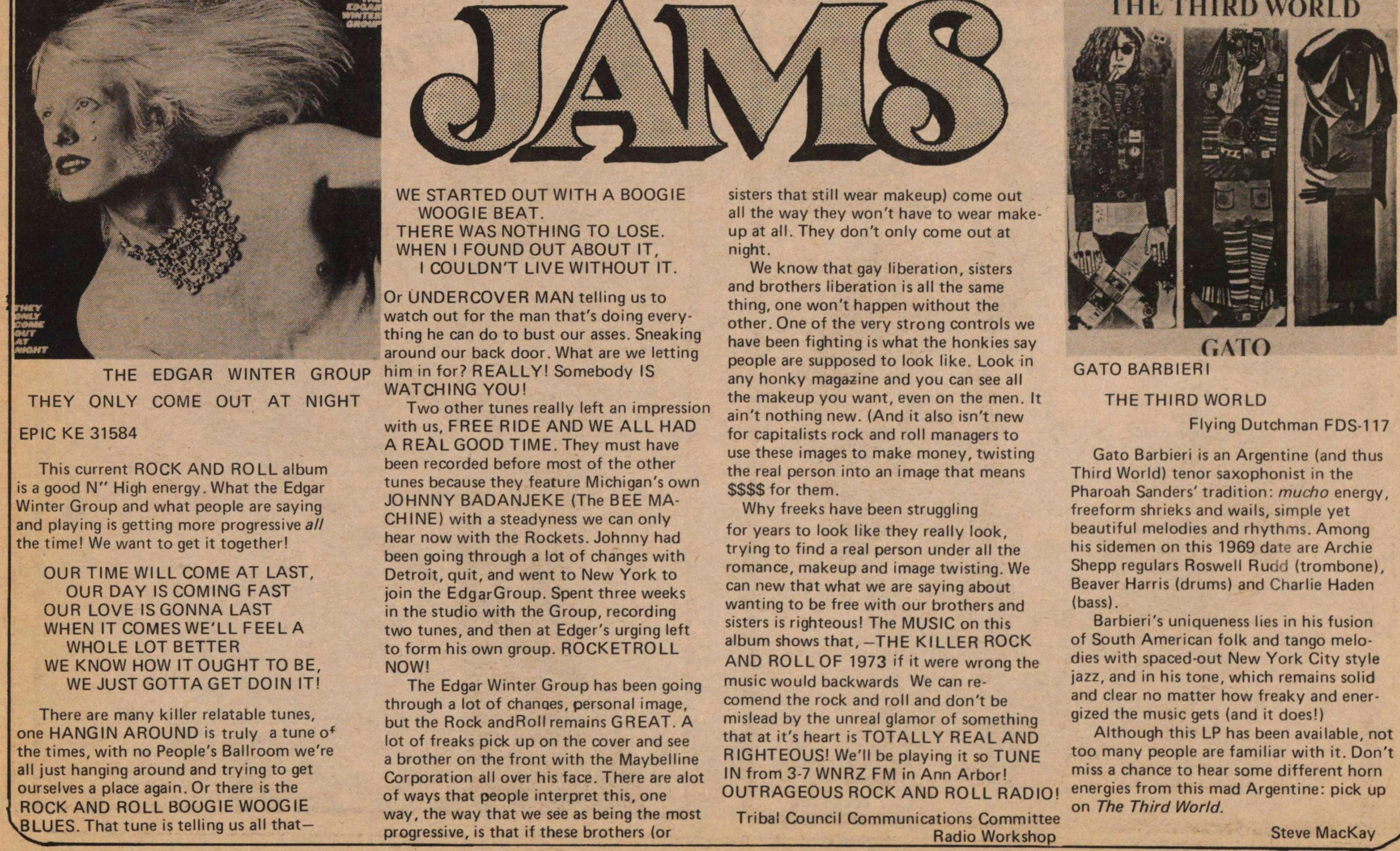 THE EDGAR WINTER GROUP THEY ONLY COME OUT AT NIGHT EPIC KE 31584 This current ROCK AND ROLL album is a good N" High energy . What the Edgar Winter Group and what people are saying and playing is getting more progressive all the time! We want to get it together! OUR TIME WILL COME AT LAST, OUR DAY IS COMING FAST OUR LOVE ISGONNA LAST WHEN ITCOMESWE'LLFEELA WHOLE LOTBETTER WE KNOW HOW IT OUGHT TO BE, WE JUST GOTTA GET DOIN IT! There are many killer relatable tunes, one HANGIN AROUND is truly a tune o' the times, with no People's Ballroom we're all just hanging around and trying to get ourselves a place again. Or there is the ROCK AND ROLL BOOGIE WOOGIE BLUES. That tune is telling us all i WE STARTEDOUTWITH A BOOGIE WOOG I E BEAT. THERE WAS NOTHING TO LOSE. WHEN I FOUND OUT ABOUT IT, I COULDNT LIVE WITHOUT IT. Or UNDERCOVER MAN telling us to watch out for the man that's doing everything he can do to bust our asses. Sneaking around our back door. What are we letting him in for? REALLY! Somebody IS WATCH ING YOU! Two other tunes really left an impression with us, FREE RIDE AND WE ALL HAD A REAL GOOD TIME. They must have been recorded before most of the other tunes because they feature Michigan's own JOHNNY BADANJEKE (The BEE MACHINE) with a steadyness we can only hear now with the Rockets. Johnny had been going through a lot of changes with Detroit, quit, and went to New York to join the EdgarGroup. Spent three weeks in the studio with the Group, recording two tunes, and then at Edger's urging left to form his own group. ROCKETROLL NOW! The Edgar Winter Group has been going through a lot of chanqes, personal image, but the Rock andRollremains GREAT. A lot of freaks piek up on the cover and see a brother on the front with the Maybelline Corporation all over his face. There are alot of ways that people interpret this, one way, the way that we see as being the most progressive, is that if these brothers (or sisters that stilt wear makeup) come out all the way they won't have to wear makeup at all. They don't only come out at night. We know that gay liberation, sisters and brothers liberation is all the same thing, one won't happen without the other. One of the very strong controls we have been fighting is what the honkies say people are supposed to look like. Look in any honky maga-zine and you can see all the makeup you want, even on the men. It ain't nothing new. (And it also isn't new for capitalists rock and roll managers to use these images to make money, twisting the real person into an image that means $$$$for them. Why freeks have been struggling for years to look like they really look, trying to find a real person under all the romance, makeup and image twisting. We can new that what we are saying about wanting to be free with our brothers and sisters is righteous! The MUSIC on this album shows that, -THE KILLER ROCK AND ROLL OF 1973 if it were wrong the music would backwards We can recomend the rock and roll and don't be mislead by the unreal glamor of something that at it's heart is TOTALLY REAL AND RIGHTEOUS! We'll be playing it so TUNE IN from 3-7 WNRZ FM in Ann Arbor! OUTRAGEOUS ROCK AND ROLL RADIO! Tribal Council Communications Committee Radio Workshop GATO BARBIERI THE THIRD WORLD Flying Dutchman FDS-1 17 Gato Barbieri s an Argentine (and thus Third World) tenor saxophonist n the Pharoah Sanders' tradition: mucho energy, freeform shrieks and wails, simple yet beautiful melodies and rhythms. Among his sidemen on this 1969 date are Archie Shepp regulars Roswell Rudd (trombone), Beaver Harris (drums) and Charlie Haden (bass). Barbieri's uniqueness lies in his fusión of South American folk and tango melodies with spaced-out New York City style jazz, and in his tone, which remains solid and clear no matter how freaky and energized the music gets (and it does!) Although this LP has been available, not too many people are familiar with it. Don't miss a chance to hear some different horn energies from this mad Argentine: pick up on The Third World.