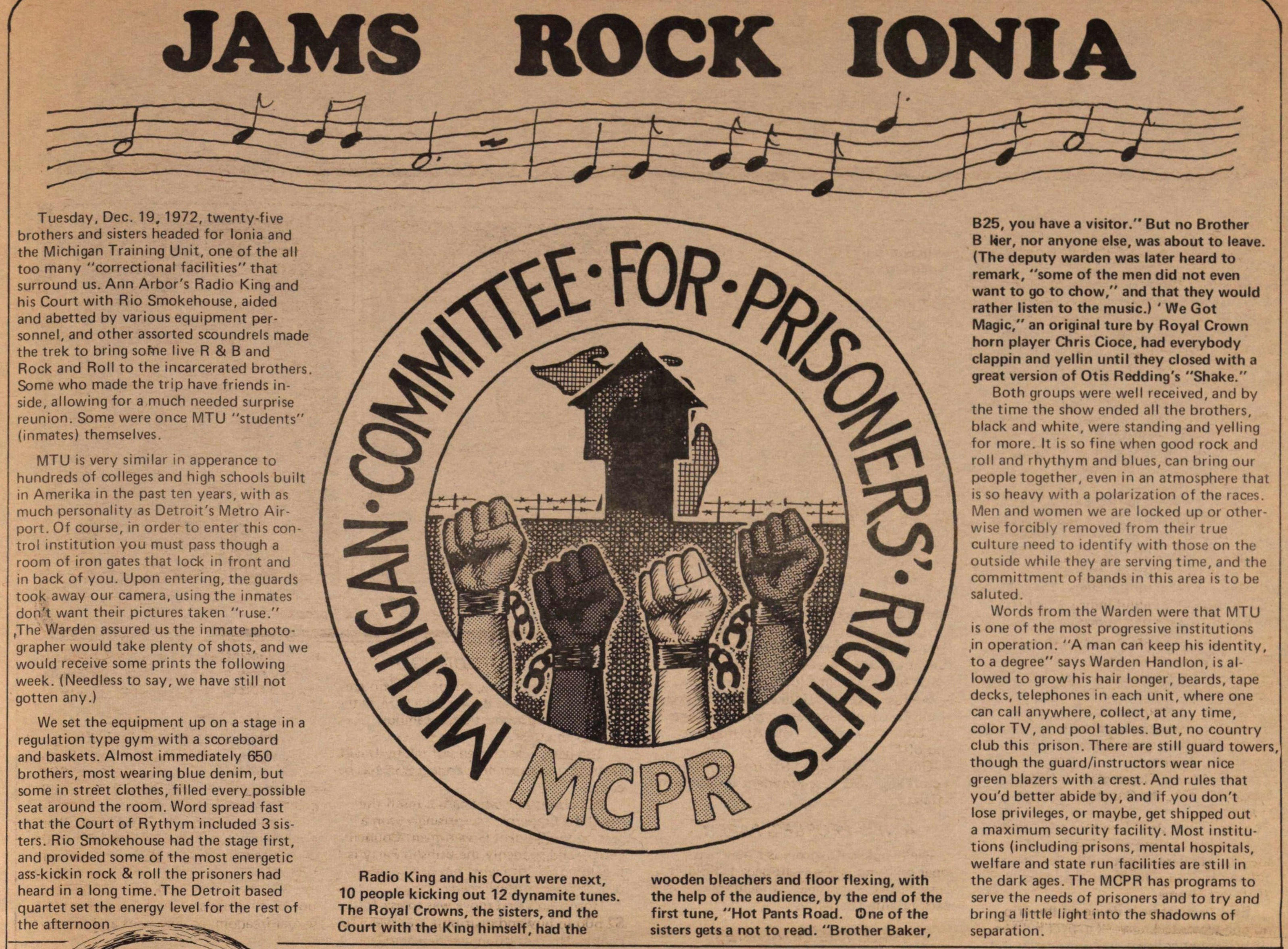 Tuesday, Dec. 19. 1972, twenty-five brothers and sisters headed for lonia and the Michigan Training Unit, one of the all too many "correctional facilities" that surround us. Ann Arbor's Radio King and his Court with Rio Smokehouse, aided and abetted by various equipment personnel, and other assorted scoundrels made the trek to bring sofne live R & B and Rock and Roll to the incarcerated brothers. Some who made the trip have friends nside, allowing for a much needed surprise reunión. Some were once MTU "students" (inmates) themselves. MTU is very similar in apperance to hundreds of colleges and high schools built in Amerika in the past ten years, with as much personality as Detroit's Metro Airport. Of course, in order to enter this control institution you must pass though a room of ron gates that lock in front and in back of you. Upon entering, the guards took away our camera, using the inmates don't want their pictures taken "ruse." ,The Warden assured us the inmate photographer would take plenty of shots, and we would receive some prints the following week. (Needless to say, we have still not gotten any.) We set the equipment up on a stage in a regulation type gym with a scoreboard and baskets. Almost immediately 650 brothers, most wearing blue denim, but some in strëet clothes, f lied every possible seat around the room. Word spread fast that the Court of Rythym included 3 sisters. Rio Smokehouse had the stage first, and provided some of the most energetic ass-kickin rock & roll the prisoners had heard n a long time. The Detroit based quartet set the energy level for the rest of the afternoon Radio King and his Court were next, 10 people kicking out 12 dynamite tunes. The Royal Crowns, the sisters, and the Court with the King himself, had the wooden bleachers and f loor flexing, with the help of the audience, by the end of the first tune, "Hot Pants Road. One of the sisters gets a not to read. "Brother Baker, B25, you have a visitor." But no Brother B Wer, nor anyone else, was about to leave. (The deputy warden was later heard to remark, "some of the men did not even want to go to chow," and that they would rather listen to the music.) ' We Got Magie," an original ture by Royal Crown hom player Chris Cioce, had everybody clappin and yellin until they closed with a great version of Otis Redding 's "Shake." Both groups were well received, and by the time the show ended all the brothers, black and white, were standing and yelling for more. It is so fine when good rock and roll and rhythym and blues, can bring our people together, even n an atmosphere that is so heavy with a polarization of the races. Men and women we are locked up or otherwise forcibly removed from their true culture need to identify with those on the outside while they are serving time, and the committment of bands in this area is to be saluted. Words from the Warden were that MTU is one of the most progressive institutions ,in operation. "A man can keep his dentity, to a degree" says Warden Handlon, is allowed to grow his hair longer, beards, tape decks, telephones in each unit, where one can cali anywhere, collect, at any time, color TV, and pool tables. But, no country club this prison. There are still guard towers, though the guardinstructors wear nice green blazers with a crest. And rules that you'd better abide by, and if you don't lose privileges, or maybe, get shipped out a maximum security facility. Most institutions (including prisons, mental hospitals, welfare and state run facilities are still in the dark ages. The MCPR has programs to serve the needs of prisoners and to try and bring a little light into the shadowns of separation.