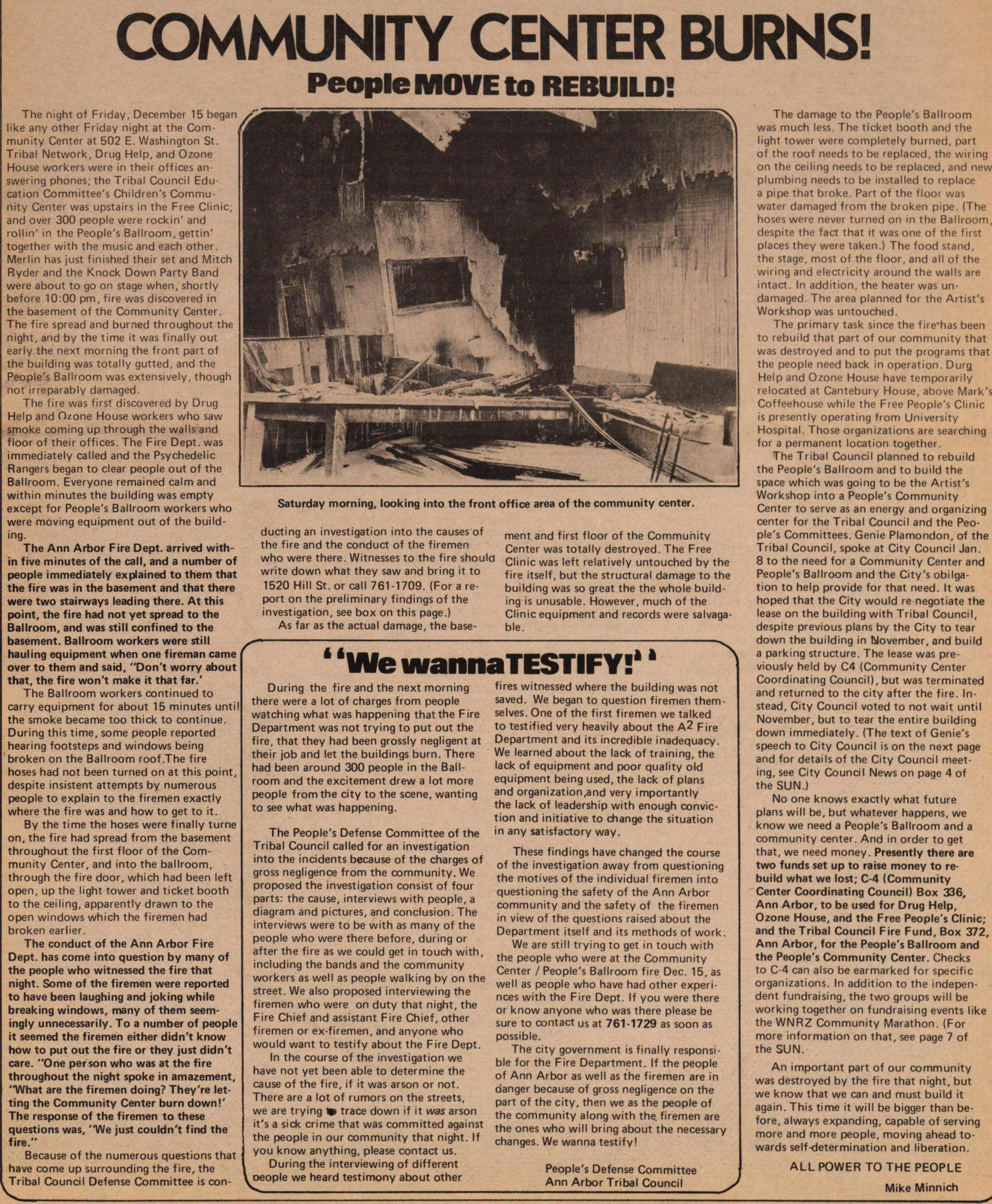 The night of Friday, December 15 began like any other Friday night at the Community Center at 502 E. Washington St. Tribal Network, Drug Help, and Ozone House workers were in their offices answering phones; the Tribal Council Education Committee’s Children’s Community Center was upstairs in the Free Clinic, and over 300 people were rockin’ and rollin’ in the People’s Ballroom, gettin’ together with the music and each other. Merlin has just finished their set and Mitch Ryder and the Knock Down Party Band were about to go on stage when, shortly before 10:00 pm, fire was discovered in the basement of the Community Center. The fire spread and burned throughout the night, and by the time it was finally out early the next morning the front part of the building was totally gutted, and the People’s Ballroom was extensively, though not irreparably damaged.

The fire was first discovered by Drug Help and Ozone House workers who saw smoke coming up through the walls and floor of their offices. The Fire Dept. was immediately called and the Psychedelic Rangers began to clear people out of the Ballroom. Everyone remained calm and within minutes the building was empty except for People’s Ballroom workers who were moving equipment out of the building.

The Ann Arbor Fire Dept. arrived within five minutes of the call, and a number of people immediately explained to them that the fire was in the basement and that there were two stairways leading there. At this point, the fire had not yet spread to the Ballroom, and was still confined to the basement. Ballroom workers were still hauling equipment when one fireman came over to them and said, “Don’t worry about that, the fire won’t make it that far.’

The Ballroom workers continued to carry equipment for about 15 minutes until the smoke became too thick to continue. During this time, some people reported hearing footsteps and windows being broken on the Ballroom roof. The fire hoses had not been turned on at this point, despite insistent attempts by numerous people to explain to the firemen exactly where the fire was and how to get to it.

By the time the hoses were finally turned on, the fire had spread from the basement throughout the first floor of the Community Center, and into the ballroom, through the fire door, which had been left open, up the light tower and ticket booth to the ceiling, apparently drawn to the open windows which the firemen had broken earlier.

The conduct of the Ann Arbor Fire Dept. has come into question by many of the people who witnessed the fire that night. Some of the firemen were reported to have been laughing and joking while breaking windows, many of them seemingly unnecessarily. To a number of people, it seemed the firemen either didn’t know how to put out the fire or they just didn’t care. “One person who was at the fire throughout the night spoke in amazement, “What are the firemen doing? They’re letting the Community Center burn down!’ The response of the firemen to these questions was, “We just couldn’t find the fire.”

Because of the numerous questions that have come up surrounding the fire, the Tribal Council Defense Committee is conducting an investigation into the causes of the fire and the conduct of the firemen who were there. Witnesses to the fire should write down what they saw and bring it to 1520 Hill St. or call 761-1709. (For a report on the preliminary findings of the investigation, see box on this page.)

As far as the actual damage, the basement and first floor of the Community Center was totally destroyed. The Free Clinic was left relatively untouched by the fire itself, but the structural damage to the building was so great that the whole building is unusable. However, much of the Clinic equipment and records were salvageable.

The damage to the People’s Ballroom was much less. The ticket booth and the light tower were completely burned, part of the roof needs to be replaced, the wiring on the ceiling needs to be replaced, and new plumbing needs to be installed to replace a pipe that broke. Part of the floor was water damaged from the broken pipe. (The hoses were never turned on in the Ballroom, despite the fact that it was one of the first places they were taken.) The food stand, the stage, most of the floor, and all of the wiring and electricity around the walls are intact. In addition, the heater was undamaged. The area planned for the Artist’s Workshop was untouched.

The primary task since the fire has been to rebuild that part of our community that was destroyed and to put the programs that the people need back in operation. Drug Help and Ozone House have temporarily relocated at Cantebury House, above Mark’s Coffeehouse while the Free People’s Clinic is presently operating from University Hospital. Those organizations are searching for a permanent location together.

The Tribal Council planned to rebuild the People’s Ballroom and to build the space which was going to be the Artist’s Workshop into a People’s Community Center to serve as an energy and organizing center for the Tribal Council and the People’s Committees. Genie Plamondon, of the Tribal Council, spoke at City Council Jan. 8 to the need for a Community Center and People’s Ballroom and the City’s obligation to help provide for that need. It was hoped that the City would renegotiate the lease on the building with Tribal Council, despite previous plans by the City to tear down the building in November, and build a parking structure. The lease was previously held by C4 (Community Center Coordinating Council), but was terminated and returned to the city after the fire. Instead, City Council voted to not wait until November, but to tear the entire building down immediately. (The text of Genie’s speech to City Council is on the next page and for details of the City Council meeting, see City Council News on page 4 of the SUN.)

No one knows exactly what future plans will be, but whatever happens, we know we need a People’s Ballroom and a community center. And in order to get that, we need money. Presently there are two funds set up to raise money to rebuild what we lost; C-4 (Community Center Coordinating Council) Box 336, Ann Arbor, to be used for Drug Help, Ozone House, and the Free People’s Clinic; and the Tribal Council Fire Fund, Box 372, Ann Arbor, for the People’s Ballroom and the People’s Community Center. Checks to C-4 can also be earmarked for specific organizations. In addition to the independent fundraising, the two groups will be working together on fundraising events like the WNRZ Community Marathon. (For more information on that, see page 7 of the SUN.

An important part of our community was destroyed by the fire that night, but we know that we can and must build it again. This time it will be bigger than before, always expanding, capable of serving more and more people, moving ahead towards self-determination and liberation.