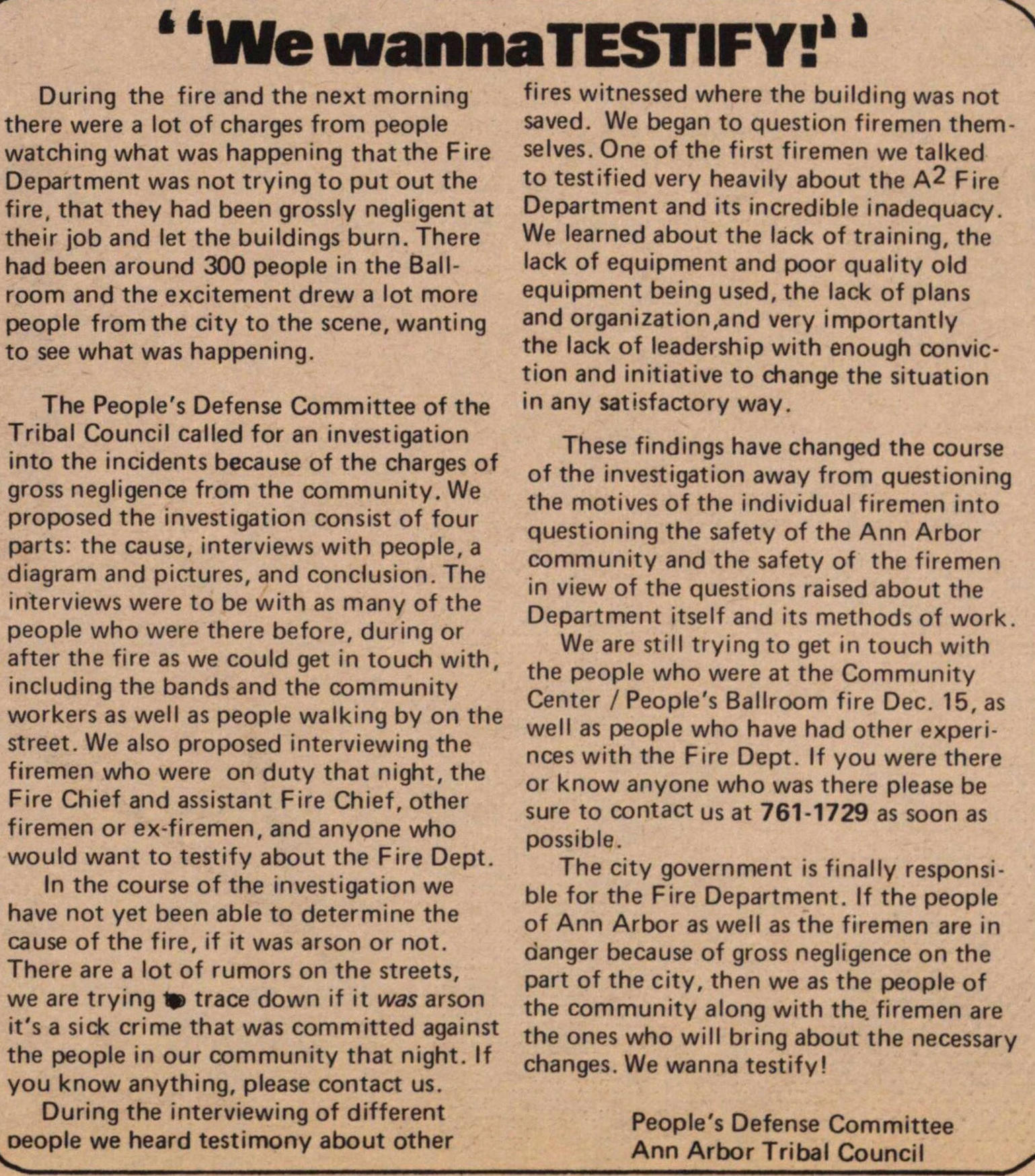 During the fire and the next morning there were a lot of charges from people watching what was happening that the Fire Department was not trying to put out the fire, that they had been grossly negligent at their job and let the buildings burn. There had been around 300 people in the Ballroom and the excitement drew a lot more people from the city to the scene, wanting to see what was happening.

The People's Defense Committee of the Tribal Council called for an investigation into the incidents because of the charges of gross negligence from the community. We proposed the investigation consist of four parts: the cause, interviews with people, a diagram and pictures, and conclusion. The interviews were to be with as many of the people who were there before, during or after the fire as we could get in touch with, including the bands and the community workers as well as people walking by on the street. We also proposed interviewing the firemen who were on duty that night, the Fire Chief and assistant Fire Chief, other firemen or ex-firemen, and anyone who would want to testify about the Fire Dept.

In the course of the investigation we have not yet been able to determine the cause of the fire, if it was arson or not. There are a lot of rumors on the streets, we are trying to trace down if it was arson it's a sick crime that was committed against the people in our community that night. If you know anything, please contact us.

During the interviewing of different people we heard testimony about other fires witnessed where the building was not saved. We began to question firemen themselves. One of the first firemen we talked to testified very heavily about the A2 Fire Department and its incredible inadequacy. We learned about the lack of training, the lack of equipment and poor-quality old equipment being used, the lack of plans and organization, and very importantly the lack of leadership with enough conviction and initiative to change the situation in any satisfactory way.

We are still trying to get in touch with the people who were at the Community Center / People's Ballroom fire Dec. 15, as well as people who have had other experiences with the Fire Dept. If you were there or know anyone who was there please be sure to contact us at 761-1729 as soon as possible.

The city government is finally responsible for the Fire Department. If the people of Ann Arbor as well as the firemen are in danger because of gross negligence on the part of the city, then we as the people of the community along with the firemen are the ones who will bring about the necessary changes. We wanna testify!