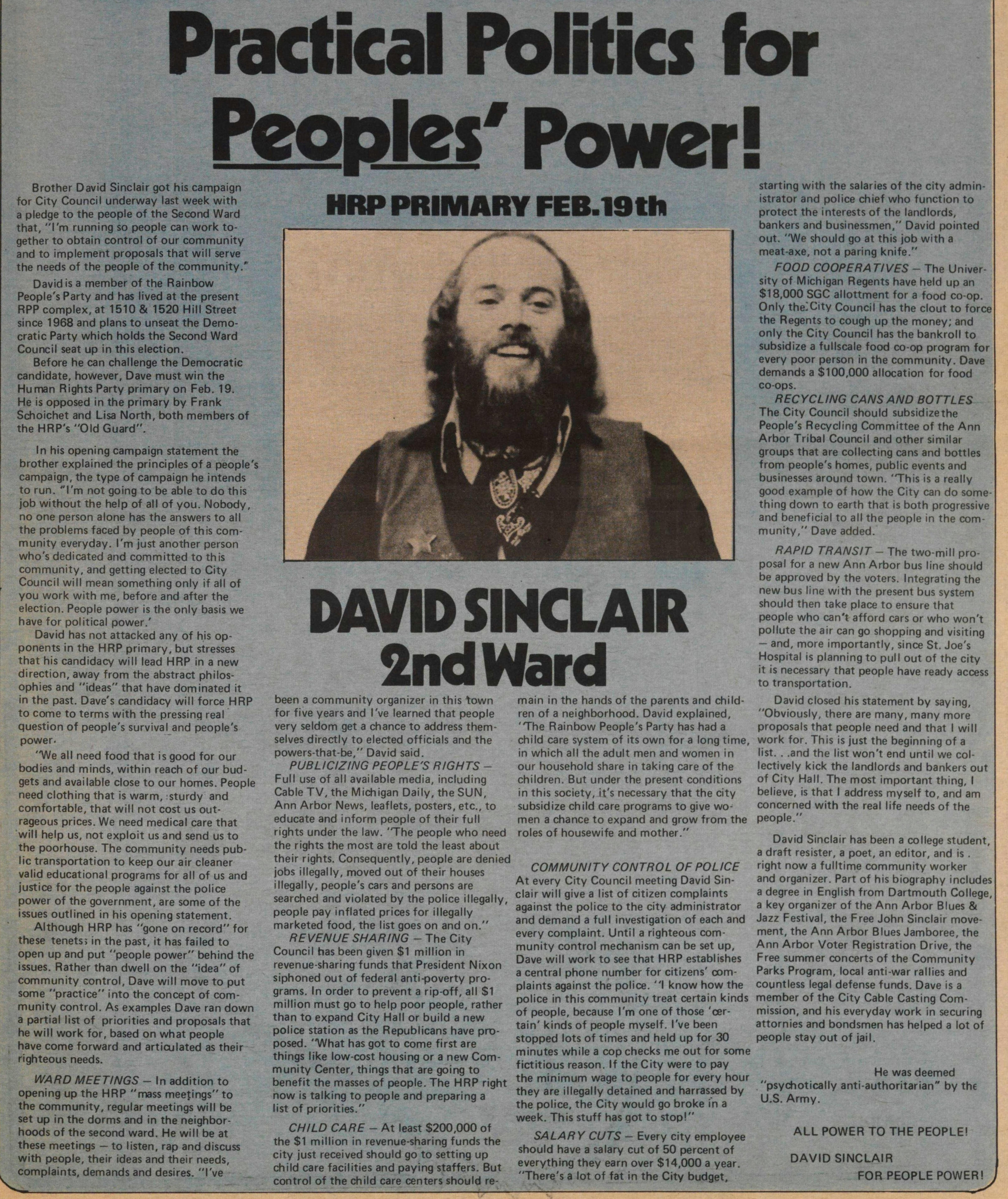 Brother David Sinclair got his campaign for City Council underway last week with a pledge to the people of the Second Ward that, “I’m running so people can work together to obtain control of our community and to implement proposals that will serve the needs of the people of the community.”

David is a member of the Rainbow People’s Party and has lived at the present RPP complex, at 1510 & 1520 Hill Street since 1968 and plans to unseat the Democratic Party which holds the Second Ward Council seat up in this election.

Before he can challenge the Democratic candidate, however, Dave must win the Human Rights Party primary on Feb. 19. He is opposed in the primary by Frank Schoichet and Lisa North, both members of the HRP’s “Old Guard”.

In his opening campaign statement, the brother explained the principles of a people’s campaign, the type of campaign he intends to run. “I’m not going to be able to do this job without the help of all of you. Nobody, no one person alone has the answers to all the problems faced by people of this community every day. I’m just another person who’s dedicated and committed to this community, and getting elected to City Council will mean something only if all of you work with me, before and after the election. People power is the only basis we have for political power.

David has not attacked any of his opponents in the HRP primary, but stresses that his candidacy will lead HRP in a new direction, away from the abstract philosophies and “ideas” that have dominated it in the past. Dave’s candidacy will force HRP to come to terms with the pressing real question of people’s survival and people’s power.

“We all need food that is good for our bodies and minds, within reach of our budgets and available close to our homes. People need clothing that is warm, sturdy and comfortable, that will not cost us outrageous prices. We need medical care that will help us, not exploit us and send us to the poorhouse. The community needs public transportation to keep our air cleaner, valid educational programs for all of us and justice for the people against the police power of the government, are some of the issues outlined in his opening statement.

Although HRP has “gone on record” for these tenets; in the past, it has failed to open up and put “people power” behind the issues. Rather than dwell on the “idea” of community control, Dave will move to put some “practice” into the concept of community control. As examples Dave ran down a partial list of priorities and proposals that he will work for, based on what people have come forward and articulated as their righteous needs.

WARD MEETINGS – In addition to opening up the HRP “mass meetings” to the community, regular meetings will be set up in the dorms and in the neighborhoods of the second ward. He will be at these meetings – to listen, rap and discuss with people, their ideas and their needs, complaints, demands and desires. “I’ve been a community organizer in this town for five years and I’ve learned that people very seldom get a chance to address themselves directly to elected officials and the powers-that-be,” David said.

PUBLICIZING PEOPLE’S RIGHTS - Full use of all available media, including Cable TV, the Michigan Daily, the SUN, Ann Arbor News, leaflets, posters, etc., to educate and inform people of their full rights under the law. “The people who need the rights the most are told the least about their rights. Consequently, people are denied jobs illegally, moved out of their houses illegally, people’s cars and persons are searched and violated by the police illegally, people pay inflated prices for illegally marketed food, the list goes on and on.”

REVENUE SHARING - The City Council has been given $1 million in revenue-sharing funds that President Nixon siphoned out of federal anti-poverty programs. In order to prevent a rip-off, all $1 million must go to help poor people, rather than to expand City Hall or build a new police station as the Republicans have proposed. “What has got to come first are things like low-cost housing or a new Community Center, things that are going to benefit the masses of people. The HRP right now is talking to people and preparing a list of priorities.”

CHILD CARE - At least $200,000 of the $1 million in revenue-sharing funds the city just received should go to setting up child care facilities and paying staffers. But control of the child care centers should remain in the hands of the parents and children of a neighborhood. David explained, “The Rainbow People’s Party has had a child care system of its own for a long time, in which all the adult men and women in our household share in taking care of the children. But under the present conditions in this society, it’s necessary that the city subsidize child care programs to give women a chance to expand and grow from the roles of housewife and mother.”

COMMUNITY CONTROL OF POLICE - At every City Council meeting David Sinclair will give a list of citizen complaints against the police to the city administrator and demand a full investigation of each and every complaint. Until a righteous community control mechanism can be set up, Dave will work to see that HRP establishes a central phone number for citizens’ complaints against the police. “I know how the police in this community treat certain kinds of people, because I’m one of those ‘certain’ kinds of people myself. I’ve been stopped lots of times and held up for 30 minutes while a cop checks me out for some fictitious reason. If the City were to pay the minimum wage to people for every hour they are illegally detained and harassed by the police, the City would go broke in a week. This stuff has got to stop!”

SALARY CUTS - Every city employee should have a salary cut of 50 percent of everything they earn over $14,000 a year. “There’s a lot of fat in the City budget. starting with the salaries of the city administrator and police chief who function to protect the interests of the landlords, bankers and businessmen,” David pointed out. “We should go at this job with a meat-axe, not a paring knife.”

RECYCLING CANS AND BOTTLES The City Council should subsidize the People’s Recycling Committee of the Ann Arbor Tribal Council and other similar groups that are collecting cans and bottles from people’s homes, public events and businesses around town. ‘This is a really good example of how the City can do something down to earth that is both progressive and beneficial to all the people in the community,” Dave added.

RAPID TRANSIT - The two-mill proposal for a new Ann Arbor bus line should be approved by the voters. Integrating the new bus line with the present bus system should then take place to ensure that people who can’t afford cars or who won’t pollute the air can go shopping and visiting – and, more importantly, since St. Joe’s Hospital is planning to pull out of the city it is necessary that people have ready access to transportation.

David closed his statement by saying, “Obviously, there are many, many more proposals that people need and that I will work for. This is just the beginning of a list... and the list won’t end until we collectively kick the landlords and bankers out of City Hall. The most important thing, I believe, is that I address myself to, and am concerned with the real life needs of the people.”

David Sinclair has been a college student, a draft resister, a poet, an editor, and is, right now, a full-time community worker and organizer. Part of his biography includes a degree in English from Dartmouth College, a key organizer of the Ann Arbor Blues & Jazz Festival, the Free John Sinclair movement, the Ann Arbor Blues Jamboree, the Ann Arbor Voter Registration Drive, the Free summer concerts of the Community Parks Program, local anti-war rallies and countless legal defense funds. Dave is a member of the City Cable Casting Commission, and his everyday work in securing attorneys and bondsmen has helped a lot of people stay out of jail.

He was deemed “psychotically anti-authoritarian” by the U.S. Army.