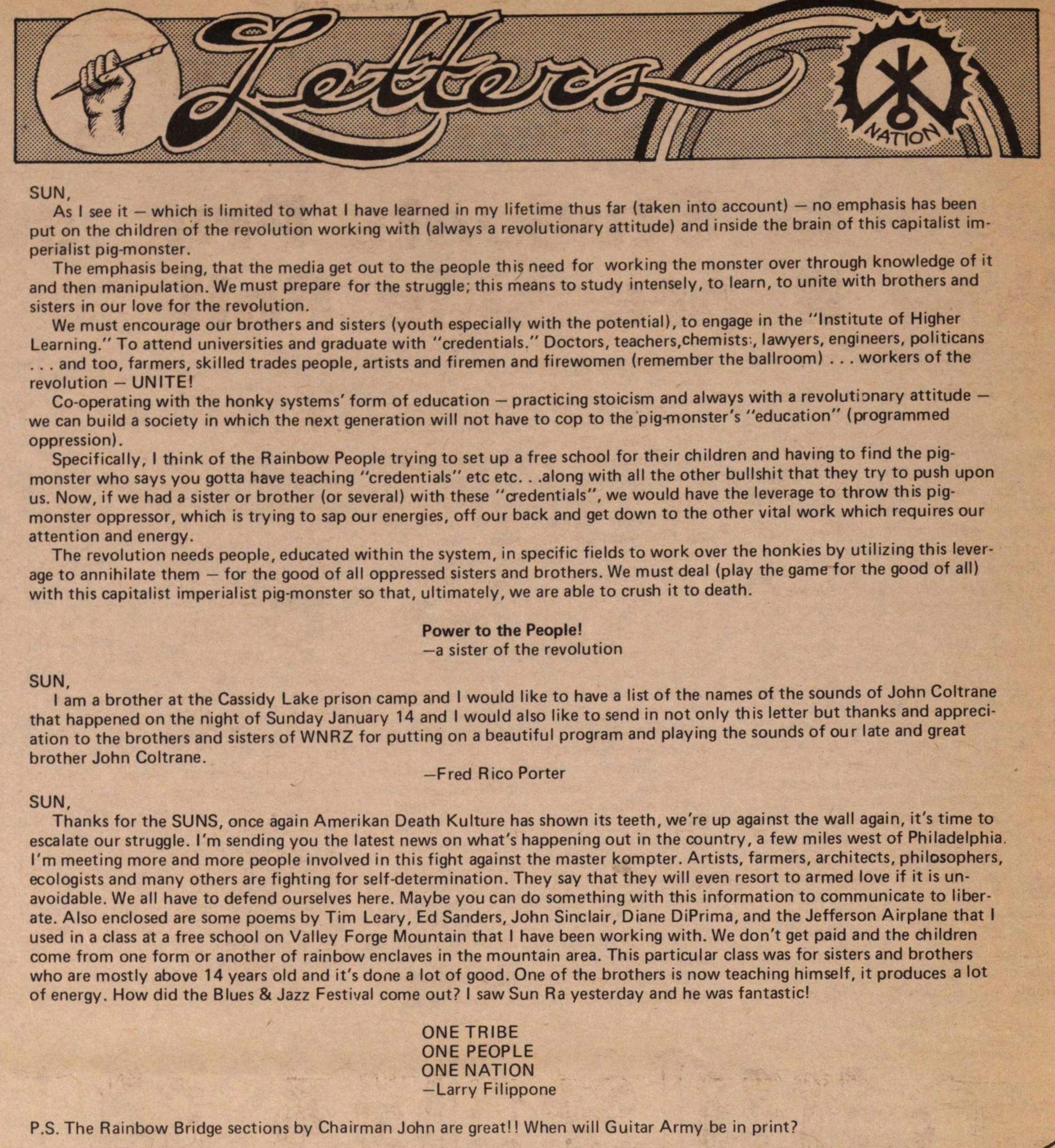 As I see it – which is limited to what I have learned in my lifetime thus far (taken into account) – no emphasis has been put on the children of the revolution working with (always a revolutionary attitude) and inside the brain of this capitalist imperialist pig–monster.

The emphasis being, that the media get out to the people this need for working the monster over through knowledge of it and then manipulation. We must prepare for the struggle; this means to study intensely, to learn, to unite with brothers and sisters in our love for the revolution.

We must encourage our brothers and sisters (youth especially with the potential), to engage in the “Institute of Higher Learning.” To attend universities and graduate with “credentials.” Doctors, teachers, chemists, lawyers, engineers, politicians ... and too, farmers, skilled trades people, artists and firemen and firewomen (remember the ballroom) ... workers of the revolution – UNITE!

Cooperating with the honky systems’ form of education – practicing stoicism and always with a revolutionary attitude – we can build a society in which the next generation will not have to cop to the pig-monster’s “education” (programmed oppression).

Specifically, I think of the Rainbow People trying to set up a free school for their children and having to find the pig-monster who says you gotta have teaching “credentials” etc. etc. … along with all the other bullshit that they try to push upon us. Now, if we had a sister or brother (or several) with these “credentials”, we would have the leverage to throw this pig-monster oppressor, which is trying to sap our energies, off our back and get down to the other vital work which requires our attention and energy.

The revolution needs people, educated within the system, in specific fields to work over the honkies by utilizing this leverage to annihilate them – for the good of all oppressed sisters and brothers. We must deal (play the game for the good of all) with this capitalist imperialist pig–monster so that, ultimately, we are able to crush it to death.

Power to the People!
– a sister of the revolution

I am a brother at the Cassidy Lake prison camp and I would like to have a list of the names of the sounds of John Coltrane that happened on the night of Sunday January 14 and I would also like to send in not only this letter but thanks and appreciation to the brothers and sisters of WNRZ for putting on a beautiful program and playing the sounds of our late and great brother John Coltrane.

Thanks for the SUNS, once again Amerikan Death Kulture has shown its teeth, we’re up against the wall again, it’s time to escalate our struggle. I’m sending you the latest news on what’s happening out in the country, a few miles west of Philadelphia. I’m meeting more and more people involved in this fight against the master kompter. Artists, farmers, architects, philosophers, ecologists and many others are fighting for self–determination. They say that they will even resort to armed love if it is unavoidable. We all have to defend ourselves here. Maybe you can do something with this information to communicate to liberate. Also enclosed are some poems by Tim Leary, Ed Sanders, John Sinclair, Diane DiPrima, and the Jefferson Airplane that I used in a class at a free school on Valley Forge Mountain that I have been working with. We don’t get paid and the children come from one form or another of rainbow enclaves in the mountain area. This particular class was for sisters and brothers who are mostly above 14 years old and it’s done a lot of good. One of the brothers is now teaching himself, it produces a lot of energy. How did the Blues & Jazz Festival come out? I saw Sun Ra yesterday and he was fantastic!

ONE TRIBE
ONE PEOPLE
ONE NATION
– Larry Filippone

P.S. The Rainbow Bridge sections by Chairman John are great!! When will Guitar Army be in print?