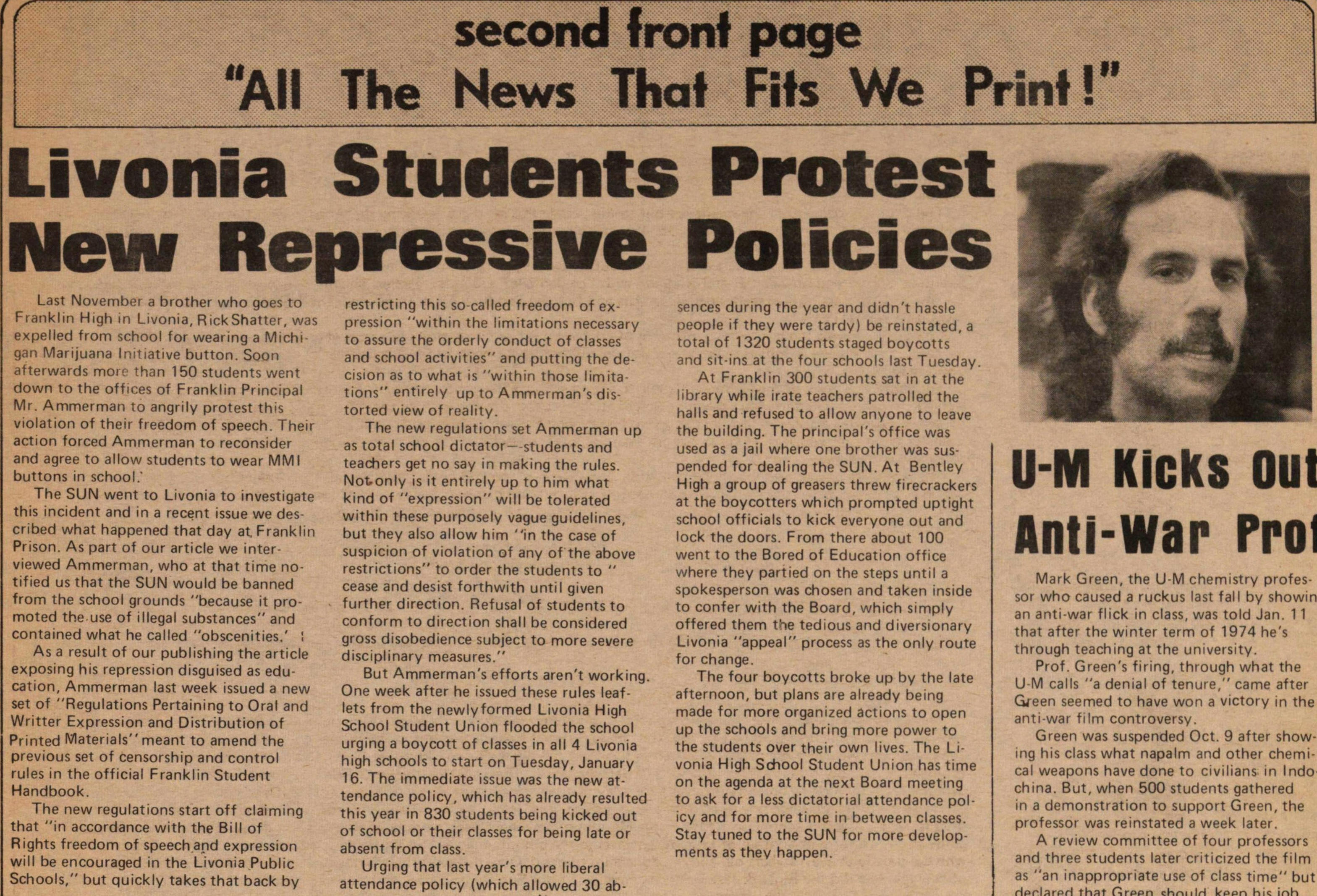 second front page
“All The News That Fits We Print!”

Last November a brother who goes to Franklin High in Livonia, Rick Shatter, was expelled from school for wearing a Michigan Marijuana Initiative button. Soon afterwards more than 150 students went down to the offices of Franklin Principal Mr. Ammerman to angrily protest this violation of their freedom of speech. Their action forced Ammerman to reconsider and agree to allow students to wear MMI buttons in school.’

The SUN went to Livonia to investigate this incident and in a recent issue we described what happened that day at Franklin Prison. As part of our article we interviewed Ammerman, who at that time notified us that the SUN would be banned from the school grounds “because it promoted the use of illegal substances” and contained what he called “obscenities.”

As a result of our publishing the article exposing his repression disguised as education, Ammerman last week issued a new set of “Regulations Pertaining to Oral and Written Expression and Distribution of Printed Materials” meant to amend the previous set of censorship and control rules in the official Franklin Student Handbook.

The new regulations start off claiming that “in accordance with the Bill of Rights freedom of speech and expression will be encouraged in the Livonia Public Schools,” but quickly takes that back by restricting this so-called freedom of expression “within the limitations necessary to assure the orderly conduct of classes and school activities” and putting the decision as to what is “within those limitations” entirely up to Ammerman’s distorted view of reality.

The new regulations set Ammerman up as total school dictator – students and teachers get no say in making the rules. Not only is it entirely up to him what kind of “expression” will be tolerated within these purposely vague guidelines, but they also allow him “in the case of suspicion of violation of any of the above restrictions” to order the students to “cease and desist forthwith until given further direction. Refusal of students to conform to direction shall be considered gross disobedience subject to more severe disciplinary measures.”

But Ammerman’s efforts aren’t working. One week after he issued these rules leaflets from the newly-formed Livonia High School Student Union flooded the school urging a boycott of classes in all 4 Livonia high schools to start on Tuesday, January 16. The immediate issue was the new attendance policy, which has already resulted this year in 830 students being kicked out of school or their classes for being late or absent from class.

Urging that last year’s more liberal attendance policy (which allowed 30 absences during the year and didn’t hassle people if they were tardy) be reinstated, a total of 1320 students staged boycotts and sit-ins at the four schools last Tuesday.

At Franklin 300 students sat in at the library while irate teachers patrolled the halls and refused to allow anyone to leave the building. The principal’s office was used as a jail where one brother was suspended for dealing the SUN. At Bentley High a group of greasers threw firecrackers at the boycotters which prompted uptight school officials to kick everyone out and lock the doors. From there about 100 went to the Bored of Education office where they partied on the steps until a spokesperson was chosen and taken inside to confer with the Board, which simply offered them the tedious and diversionary Livonia “appeal” process as the only route for change.

The four boycotts broke up by the late afternoon, but plans are already being made for more organized actions to open up the schools and bring more power to the students over their own lives. The Livonia High School Student Union has time on the agenda at the next Board meeting to ask for a less dictatorial attendance policy and for more time in between classes. Stay tuned to the SUN for more developments as they happen.