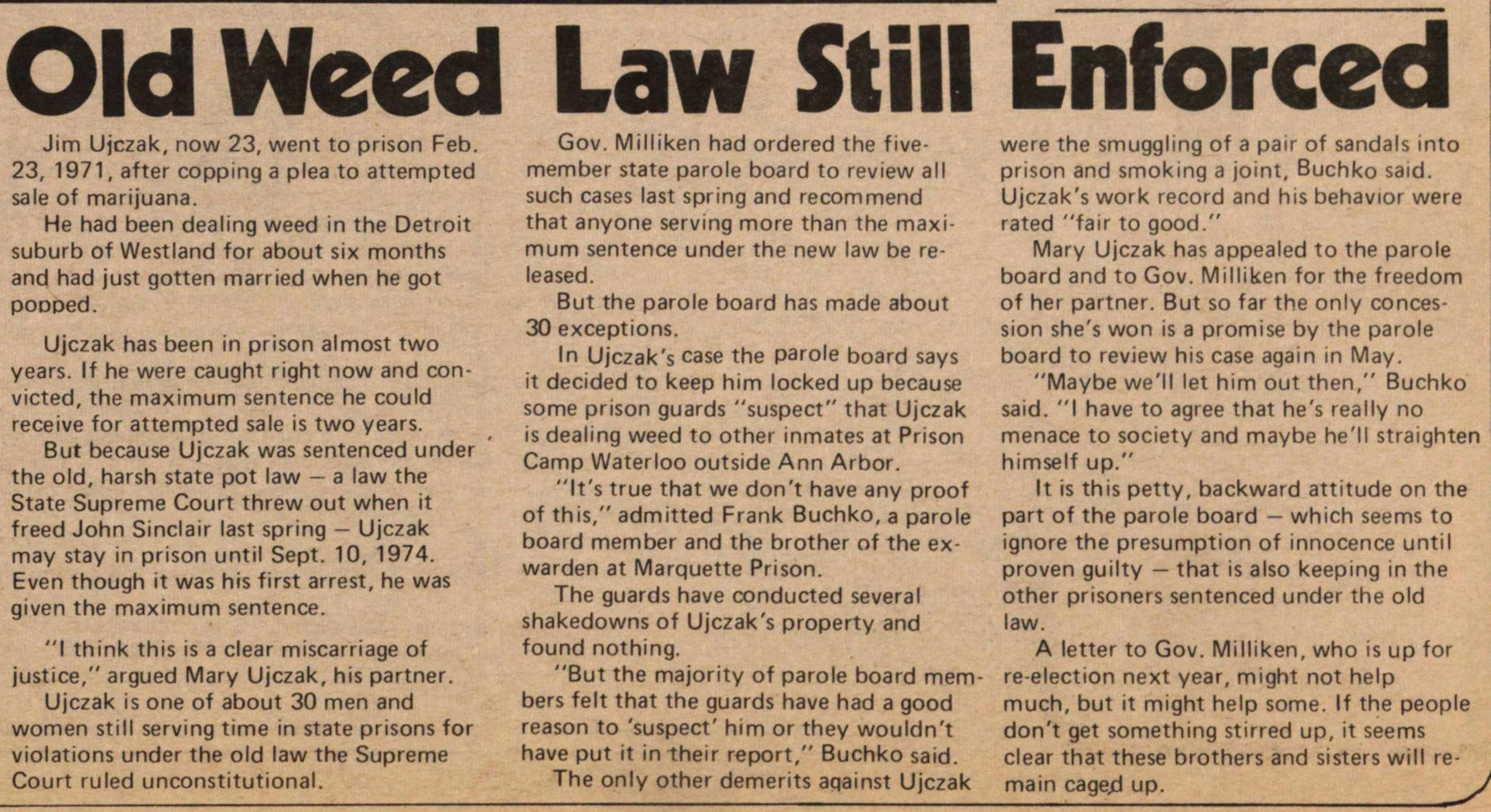 He had been dealing weed in the Detroit suburb of Westland for about six months and had just gotten married when he got popped.

Ujczak has been in prison almost two years. If he were caught right now and convicted, the maximum sentence he could receive for attempted sale is two years.

But because Ujczak was sentenced under the old, harsh state pot law – a law the State Supreme Court threw out when it freed John Sinclair last spring – Ujczak may stay in prison until Sept. 10, 1974. Even though it was his first arrest, he was given the maximum sentence.

“I think this is a clear miscarriage of justice,” argued Mary Ujczak, his partner.

Ujczak is one of about 30 men and women still serving time in state prisons for violations under the old law the Supreme Court ruled unconstitutional.

Gov. Milliken had ordered the five-member state parole board to review all such cases last spring and recommend that anyone serving more than the maximum sentence under the new law be released.

But the parole board has made about 30 exceptions.

In Ujczak’s case the parole board says it decided to keep him locked up because some prison guards “suspect” that Ujczak is dealing weed to other inmates at Prison Camp Waterloo outside Ann Arbor.

“It’s true that we don’t have any proof of this,” admitted Frank Buchko, a parole board member and the brother of the ex-warden at Marquette Prison.

The guards have conducted several shakedowns of Ujczak’s property and found nothing.

“But the majority of parole board members felt that the guards have had a good reason to ‘suspect’ him or they wouldn’t have put it in their report,” Buchko said.

The only other demerits against Ujczak were the smuggling of a pair of sandals into prison and smoking a joint, Buchko said. Ujczak’s work record and his behavior were rated “fair to good.”

Mary Ujczak has appealed to the parole board and to Gov. Milliken for the freedom of her partner. But so far the only concession she’s won is a promise by the parole board to review his case again in May.

“Maybe we’ll let him out then,” Buchko said. “I have to agree that he’s really no menace to society and maybe he’ll straighten himself up.”

It is this petty, backward attitude on the part of the parole board – which seems to ignore the presumption of innocence until proven guilty – that is also keeping in the other prisoners sentenced under the old law.

A letter to Gov. Milliken, who is up for re-election next year, might not help much, but it might help some. If the people don’t get something stirred up, it seems clear that these brothers and sisters will remain caged up.