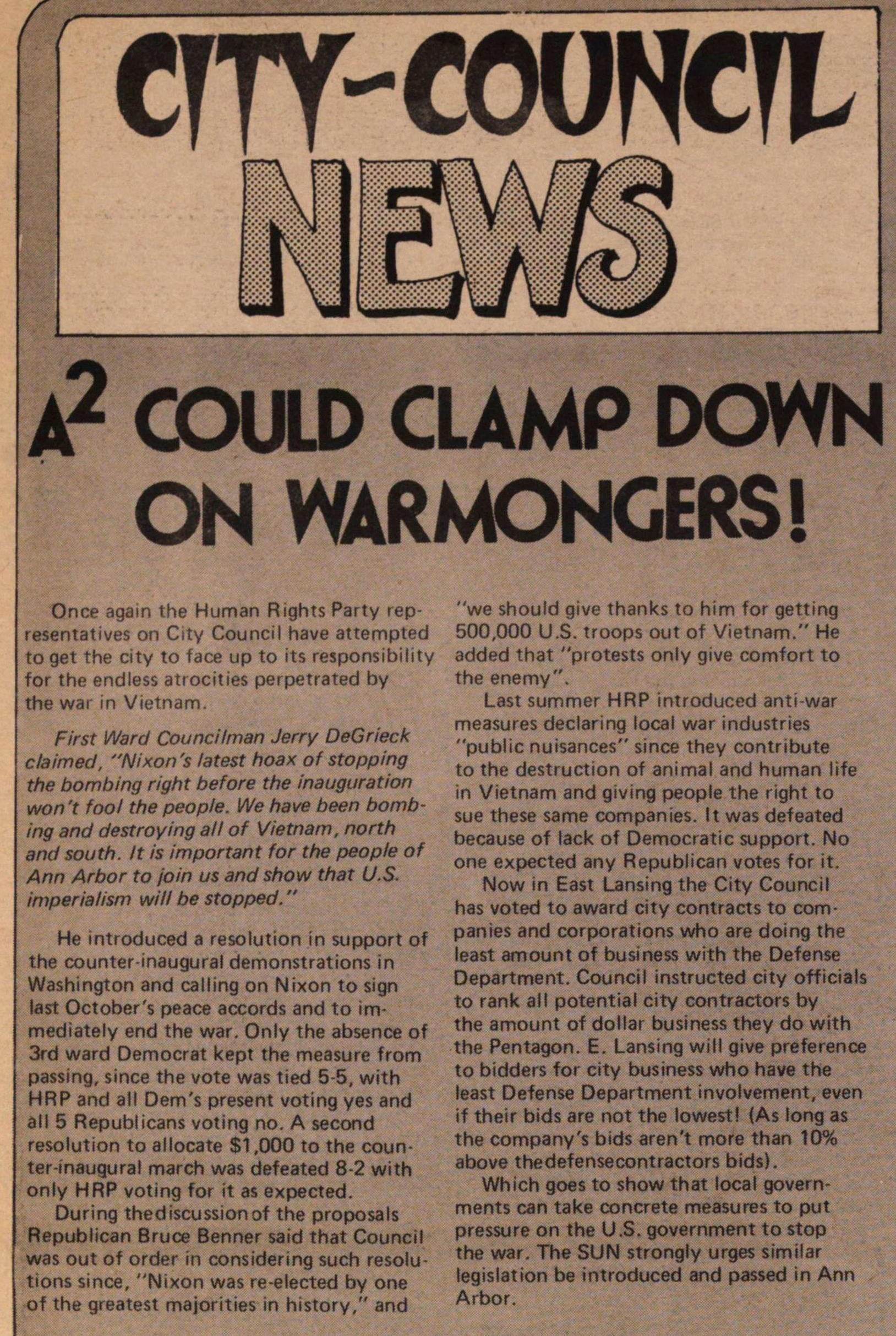 A2 COULD CLAMP DOWN ON WARMONGERS!

Once again the Human Rights Party representatives on City Council have attempted to get the city to face up to its responsibility for the endless atrocities perpetrated by the war in Vietnam.

First Ward Councilman Jerry DeGrieck claimed, “Nixon ‘s latest hoax of stopping the bombing right before the inauguration won’t fool the people. We have been bombing and destroying all of Vietnam, north and south. It is important for the people of Ann Arbor to join us and show that U.S. imperialism will be stopped.”

He introduced a resolution in support of the counter-inaugural demonstrations in Washington and calling on Nixon to sign last October’s peace accords and to immediately end the war. Only the absence of 3rd ward Democrat kept the measure from passing, since the vote was tied 5-5, with HRP and all Dem’s present voting yes and all 5 Republicans voting no. A second resolution to allocate $1,000 to the counter inaugural march was defeated 8-2 with only HRP voting for it as expected.

During the discussion of the proposals Republican Bruce Benner said that Council was out of order in considering such resolutions since, “Nixon was re-elected by one of the greatest majorities in history,” and “we should give thanks to him for getting 500,000 U.S. troops out of Vietnam.” He added that “protests only give comfort to the enemy”.

Last summer HRP introduced anti-war measures declaring local war industries “public nuisances” since they contribute to the destruction of animal and human life in Vietnam and giving people the right to sue these same companies. It was defeated because of lack of Democratic support. No one expected any Republican votes for it.

Now in East Lansing the City Council has voted to award city contracts to companies and corporations who are doing the least amount of business with the Defense Department. Council instructed city officials to rank all potential city contractors by the amount of dollar business they do with the Pentagon. E. Lansing will give preference to bidders for city business who have the least Defense Department involvement, even if their bids are not the lowest! (As long as the company’s bids aren’t more than 10% above the defense contractors bids).

Which goes to show that local governments can take concrete measures to put pressure on the U.S. government to stop the war. The SUN strongly urges similar legislation be introduced and passed in Ann Arbor.