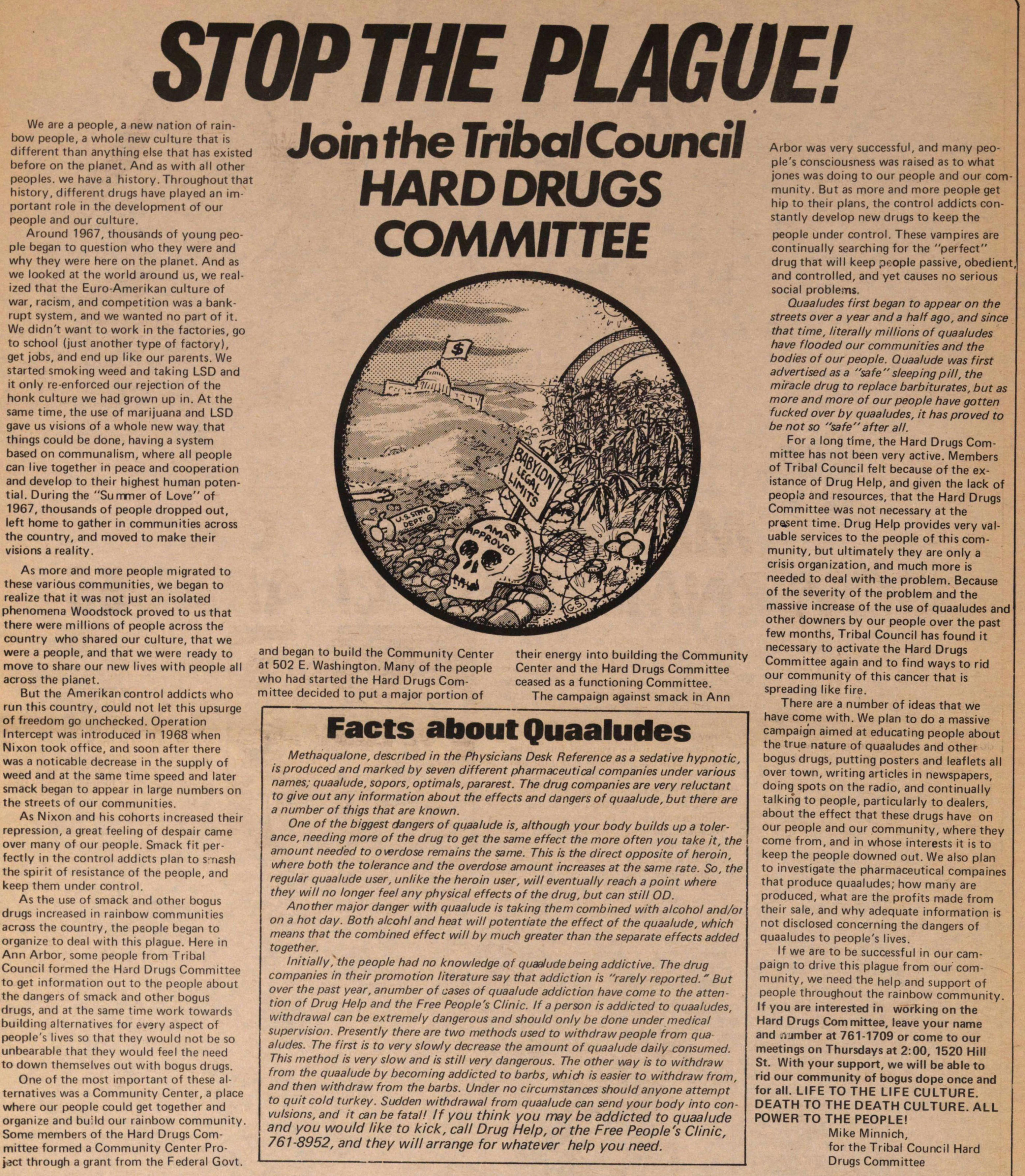 We are a people, a new nation of rainbow people, a whole new culture that is different than anything else that has existed before on the planet. And as with all other peoples. we have a history. Throughout that history, different drugs have played an important role in the development of our people and our culture.

Around 1967, thousands of young people began to question who they were and why they were here on the planet. And as we looked at the world around us, we realized that the Euro-American culture of war, racism, and competition was a bankrupt system, and we wanted no part of it. We didn't want to work in the factories, go to school (just another type of factory), get jobs, and end up like our parents. We started smoking weed and taking LSD and it only re-enforced our rejection of the honk culture we had grown up in. At the same time, the use of marijuana and LSD gave us visions of a whole new way that things could be done, having a system based on communalism, where all people can live together in peace and cooperation and develop to their highest human potential. During the "Summer of Love" of 1967, thousands of people dropped out, left home to gather in communities across the country, and moved to make their visions a reality.

As more and more people migrated to these various communities, we began to realize that it was not just an isolated phenomena Woodstock proved to us that there were millions of people across the country who shared our culture, that we were a people, and that we were ready to move to share our new lives with people all across the planet.

But the American control addicts who run this country, could not let this upsurge of freedom go unchecked. Operation Intercept was introduced in 1968 when Nixon took office, and soon after there was a noticeable decrease in the supply of weed and at the same time speed and later smack began to appear in large numbers on the streets of our communities.

As Nixon and his cohorts increased their repression, a great feeling of despair carne over many of our people. Smack fit perfectly in the control addicts plan to smash the spirit of resistance of the people, and keep them under control.

As the use of smack and other bogus drugs increased in rainbow communities across the country, the people began to organize to deal with this plague. Here in Ann Arbor, some people from Tribal Council formed the Hard Drugs Committee to get information out to the people about the dangers of smack and other bogus drugs, and at the same time work towards building alternatives for every aspect of people's lives so that they would not be so unbearable that they would feel the need to down themselves out with bogus drugs.

The campaign against smack in Ann Arbor was very successful, and many people's consciousness was raised as to what Jones was doing to our people and our community. But as more and more people get hip to their plans, the control addicts constantly develop new drugs to keep the people under control. These vampires are continually searching for the "perfect" drug that will keep people passive, obedient, and controlled, and yet causes no serious social problems.

Quaaludes first began to appear on the streets over a year and a half ago, and since that time, literally millions of quaaludes have flooded our communities and the bodies of our people. Quaalude was first advertised as a "safe" sleeping pill, the miracle drug to replace barbiturates, but as more and more of our people have gotten fucked over by quaaludes, it has proved to be not so "safe" after all.

For a long time, the Hard Drugs Committee has not been very active. Members of Tribal Council felt because of the existence of Drug Help, and given the lack of people and resources, that the Hard Drugs Committee was not necessary at the present time. Drug Help provides very valuable services to the people of this community, but ultimately they are only a crisis organization, and much more is needed to deal with the problem. Because of the severity of the problem and the massive increase of the use of quaaludes and other downers by our people over the past few months. Tribal Council has found it necessary to activate the Hard Drugs Committee again and to find ways to rid our community of this cancer that is spreading like fire.

There are a number of ideas that we have come with. We plan to do a massive campaign aimed at educating people about the true nature of quaaludes and other bogus drugs, putting posters and leaflets all over town, writing articles in newspapers, doing spots on the radio, and continually talking to people, particularly to dealers, about the effect that these drugs have on our people and our community, where they come from, and in whose interests it is to keep the people downed out. We also plan to investigate the pharmaceutical companies that produce quaaludes; how many are produced, what are the profits made from their sale, and why adequate information s not disclosed concerning the dangers of quaaludes to people's lives.

If we are to be successful in our campaign to drive this plague from our community, we need the help and support of people throughout the rainbow community. If you are interested in working on the Hard Drugs Committee, leave your name and number at 761-1709 or come to our meetings on Thursdays at 2:00, 1520 Hill St. With your support, we will be able to rid our community of bogus dope once and for all.

LIFE TO THE LIFE CULTURE. DEATH TO THE DEATH CULTURE. ALL POWER TOTHE PEOPLE!