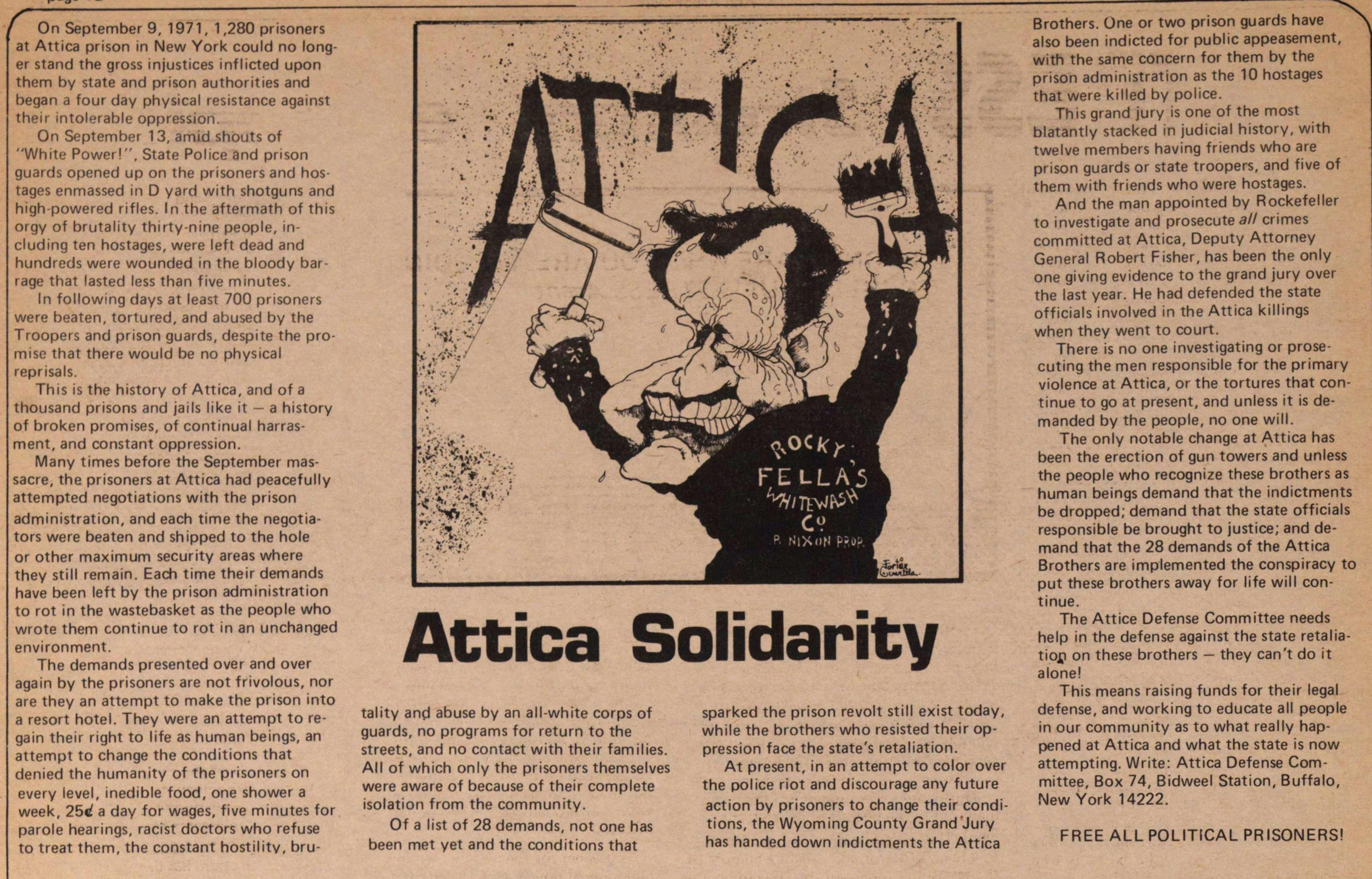 On September 9, 1971, 1,280 prisoners at Attica prison in New York could no longer stand the gross injustices inflicted upon them by state and prison authorities and began a four day physical resistance against their intolerable oppression.

In following days at least 700 prisoners were beaten, tortured, and abused by the Troopers and prison guards, despite the promise that there would be no physical reprisals.

This is the history of Attica, and of a thousand prisons and jails like it -- a history of broken promises, of continual harassment, and constant oppression.

Many times before the September massacre, the prisoners at Attica had peacefully attempted negotiations with the prison administration, and each time the negotiators were beaten and shipped to the hole or other maximum security areas where they still remain. Each time their demands have been left by the prison administration to rot in the wastebasket as the people who wrote them continue to rot in an unchanged environment.

The demands presented over and over again by the prisoners are not frivolous, nor are they an attempt to make the prison into a resort hotel. They were an attempt to regain their right to life as human beings, an attempt to change the conditions that denied the humanity of the prisoners on every level, inedible food, one shower a week, 25 cents a day for wages, five minutes for parole hearings, racist doctors who refuse to treat them, the constant hostility, brutality and abuse by an all-white corps of guards, no programs for return to the streets, and no contact with their families. All of which only the prisoners themselves were aware of because of their complete isolation from the community.

Of a list of 28 demands, not one has been met yet and the conditions that sparked the prison revolt still exist today, while the brothers who resisted their oppression face the state's retaliation.

At present, in an attempt to color over the police riot and discourage any future action by prisoners to change their conditions, the Wyoming County Grand Jury has handed down indictments to the Attica Brothers. One or two prison guards have also been indicted for public appeasement, with the same concern for them by the prison administration as the 10 hostages that were killed by police.

This grand jury is one of the most blatantly stacked in judicial history, with twelve members having friends who are prison guards or state troopers, and five of them with friends who were hostages.

And the man appointed by Rockefeller to investigate and prosecute all crimes committed at Attica, Deputy Attorney General Robert Fisher, has been the only one giving evidence to the grand jury over the last year. He had defended the state officials involved in the Attica killings when they went to court.

There is no one investigating or prosecuting the men responsible for the primary violence at Attica, or the tortures that continue to go on at present, and unless it is demanded by the people, no one will.

The Attica Defense Committee needs help in the defense against the state retaliation on these brothers -- they can't do it alone!

This means raising funds for their legal defense, and working to educate all people in our community as to what really happened at Attica and what the state is now attempting. Write: Attica Defense Committee, Box 74, Bidweel Station, Buffalo, New York 14222.