Stress: Strain On The People 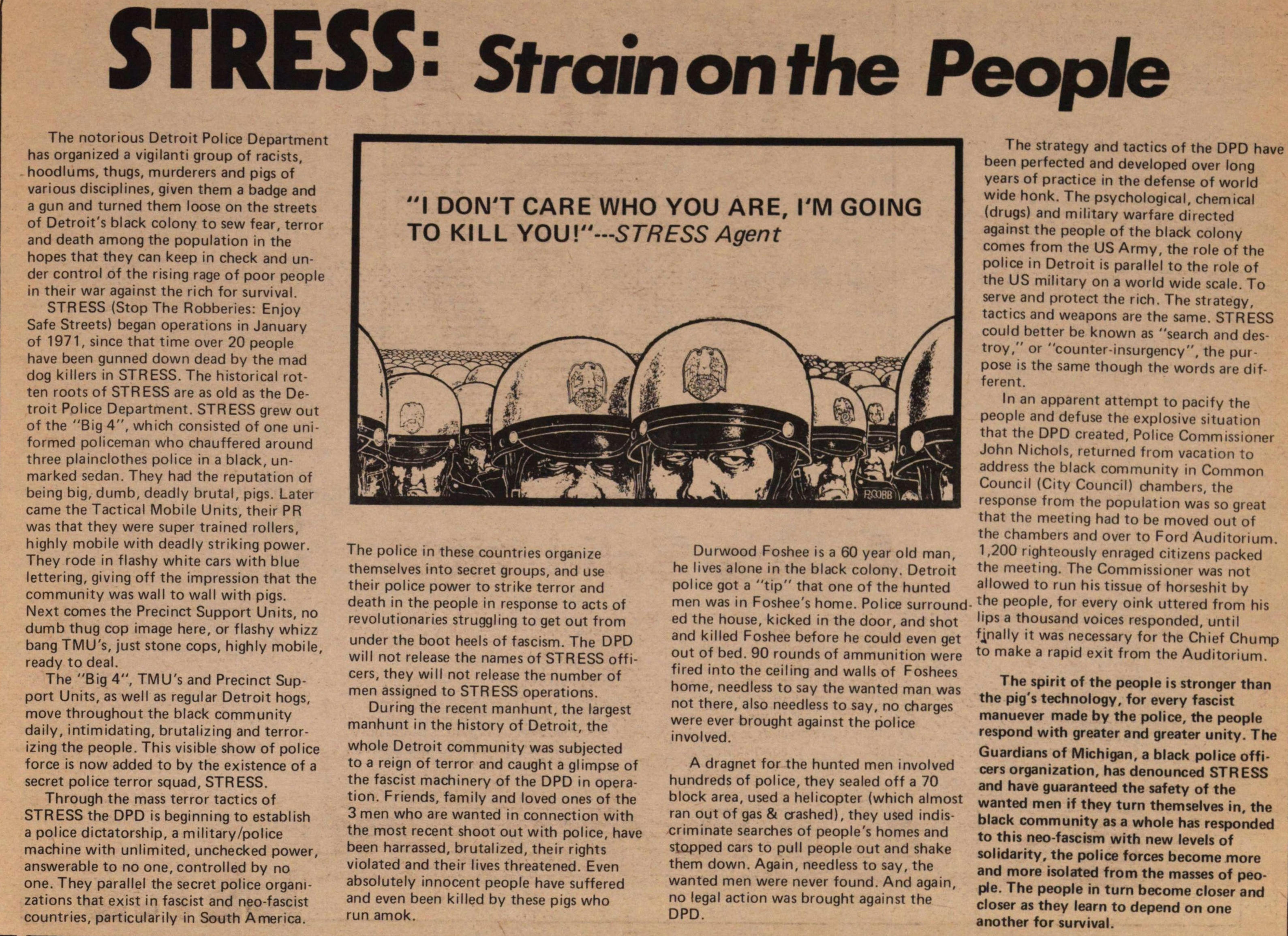 STRESS: Strain on the People

The notorious Detroit Police Department has organized a vigilante group of racists, hoodlums, thugs, murderers and pigs of various disciplines, given them a badge and a gun and turned them loose on the streets of Detroit's black colony to sew fear, terror and death among the population in the hopes that they can keep in check and under control of the rising rage of poor people in their war against the rich for survival.

STRESS (Stop The Robberies: Enjoy Safe Streets) began operations in January of 1971, since that time over 20 people have been gunned down dead by the mad dog killers in STRESS. The historical rotten roots of STRESS are as old as the Detroit Police Department. STRESS grew out of the "Big 4", which consisted of one uniformed policeman who chauffeured around three plainclothes police in a black, unmarked sedan. They had the reputation of being big, dumb, deadly brutal, pigs. Later came the Tactical Mobile Units, their PR was that they were super trained rollers, highly mobile with deadly striking power. They rode in flashy white cars with blue lettering, giving off the impression that the community was wall to wall with pigs. Next comes the Precinct Support Units, no dumb thug cop image here, or flashy whizz bang TMU's, just stone cops, highly mobile, ready to deal.

The "Big 4", TMU's and Precinct Support Units, as well as regular Detroit hogs, move throughout the black community daily, intimidating, brutalizing and terrorizing the people. This visible show of police force is now added to by the existence of a secret police terror squad, STRESS.

Through the mass terror tactics of STRESS the DPD is beginning to establish a police dictatorship, a military/police machine with unlimited, unchecked power, answerable to no one, controlled by no one. They parallel the secret police organizations that exist in fascist and neo-fascist countries, particularly in South America. The police in these countries organize themselves into secret groups, and use their police power to strike terror and death in the people in response to acts of revolutionaries struggling to get out from under the boot heels of fascism. The DPD will not release the names of STRESS officers, they will not release the number of men assigned to STRESS operations.

During the recent manhunt, the largest manhunt in the history of Detroit, the whole Detroit community was subjected to a reign of terror and caught a glimpse of the fascist machinery of the DPD in operation. Friends, family and loved ones of the 3 men who are wanted in connection with the most recent shoot out with police, have been harassed, brutalized, their rights violated and their lives threatened. Even absolutely innocent people have suffered and even been killed by these pigs who run amok.

Durwood Foshee is a 60 year old man, he lives alone in the black colony. Detroit police got a "tip" that one of the hunted men was in Foshee's home. Police surrounded the house, kicked in the door, and shot and killed Foshee before he could even get out of bed. 90 rounds of ammunition were fired into the ceiling and walls of Foshees home, needless to say the wanted man was not there, also needless to say, no charges were ever brought against the police involved.

A dragnet for the hunted men involved hundreds of police, they sealed off a 70 block area, used a helicopter (which almost ran out of gas & crashed), they used indiscriminate searches of people's homes and stopped cars to pull people out and shake them down. Again, needless to say, the wanted men were never found. And again, no legal action was brought against the DPD.

The strategy and tactics of the DPD have been perfected and developed over long years of practice in the defense of world wide honk. The psychological, chemical (drugs) and military warfare directed against the people of the black colony comes from the US Army, the role of the police in Detroit is parallel to the role of the US military on a world wide scale. To serve and protect the rich. The strategy, tactics and weapons are the same. STRESS could better be known as "search and destroy," or "counter-insurgency", the purpose is the same though the words are different.

In an apparent attempt to pacify the people and defuse the explosive situation that the DPD created. Police Commissioner John Nichols, returned from vacation to address the black community in Common Council (City Council) chambers, the response from the population was so great that the meeting had to be moved out of the chambers and over to Ford Auditorium. 1,200 righteously enraged citizens packed the meeting. The Commissioner was not allowed to run his tissue of horseshit by the people, for every oink uttered from his lips a thousand voices responded, until finally it was necessary for the Chief Chump to make a rapid exit from the Auditorium.

The spirit of the people is stronger than the pig's technology, for every fascist maneuver made by the police, the people respond with greater and greater unity. The Guardians of Michigan, a black police officers organization, has denounced STRESS and have guaranteed the safety of the wanted men if they turn themselves in, the black community as a whole has responded to this neo fascism with new levels of solidarity, the police forces become more and more isolated from the masses of people. The people in turn become closer and closer as they learn to depend on one another for survival.

"I DON'T CARE WHO YOU ARE. I'M GOING TO KILL YOU-- STRESS Agent