U Of M Evicts Student For Reporting Reefer Robbery! 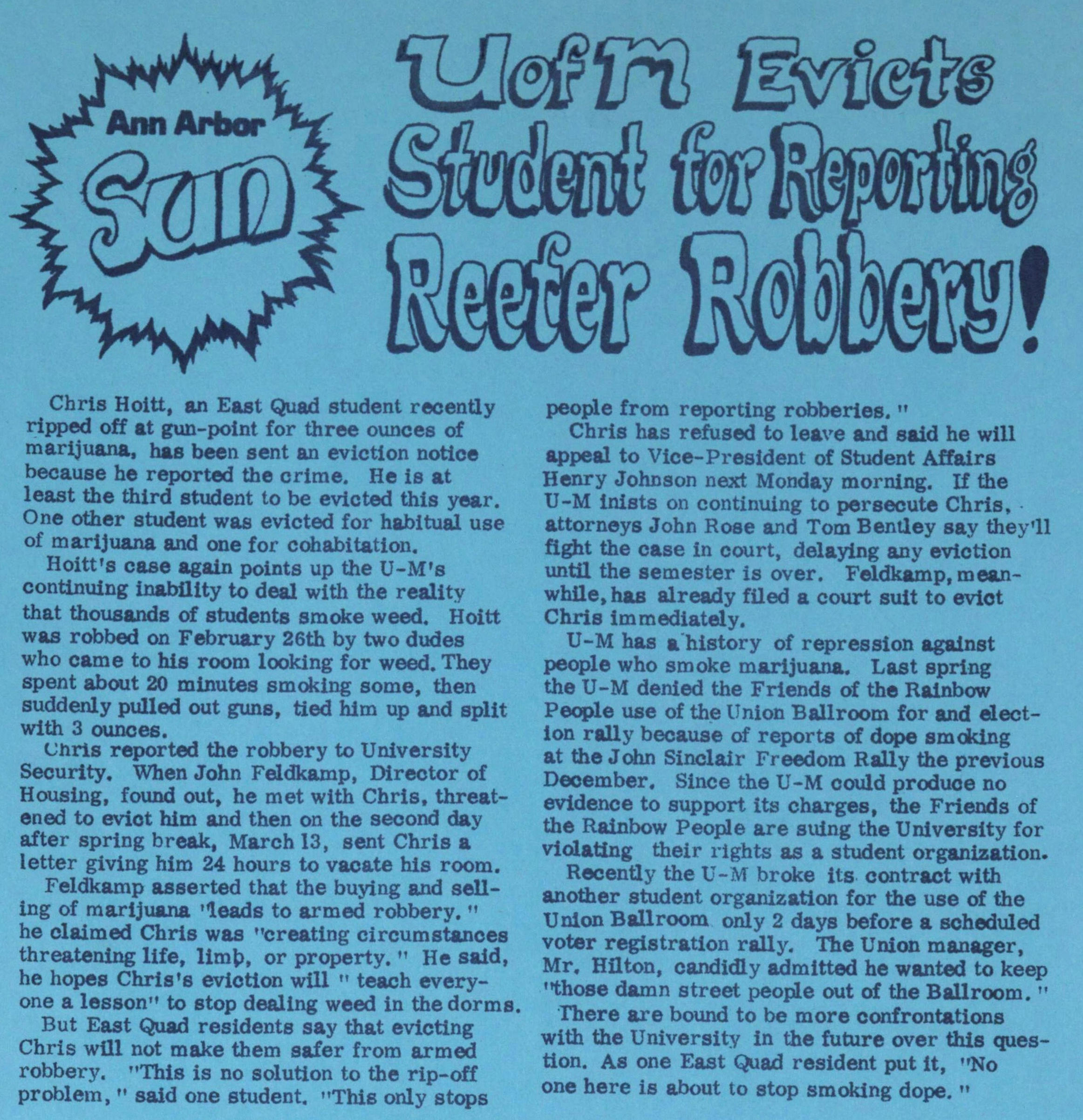 Chris Hoitt, an East Quad student recently ripped off at gun-point for three ounces of marijuana, has been sent an eviction notice because he reported the crime. He is at least the third student to be evicted this year. One other student was evicted for habitual use of marijuana and one for cohabitation.

Hoitt's case again points up the U-M's continuing inability to deal with the reality that thousands of students smoke weed. Hoitt was robbed on February 26th by two dudes who came to his room looking for weed. They spent about 20 minutes smoking some, then suddenly pulled out guns, tied him up and split with 3 ounces.

Chris reported the robbery to University Security. When John Feldkamp, Director of Housing, found out, he met with Chris, threatened to evict him and then on the second day after spring break, March 13, sent Chris a letter giving him 24 hours to vacate his room.

Feldkamp asserted that the buying and selling of marijuana "leads to armed robbery. " he claimed Chris was "creating circumstances threatening life, limb, or property. " He said, he hopes Chris's eviction will " teach everyone a lesson" to stop dealing weed in the dorms.

But East Quad residents say that evicting Chris will not make them safer from armed robbery. "This is no solution to the rip-off problem," said one student. "This only stops people from reporting robberies."

Chris has refused to leave and said he will appeal to President of Student Affairs Henry Johnson next Monday morning. If the U-M insists on continuing to persecute Chris, attorneys John Rose and Tom Bentley say they'll fight the case in court, delaying any eviction until the semester is over. Feldkamp, meanwhile, has already filed a court suit to evict Chris immediately.

U-M has a history of repression against people who smoke marijuana. Last spring the U-M denied the Friends of the Rainbow People use of the Union Ballroom for and election rally because of reports of dope smoking at the John Sinclair Freedom Rally the previous December. Since the U-M could produce no evidence to support its charges, the Friends of the Rainbow People are suing the University for violating their rights as a student organization.

Recently the U-M broke its contract with another student organization for the use of the Union Ballroom only 2 days before a scheduled voter registration rally. The Union manager, Mr. Hilton, candidly admitted he wanted to keep those damn street people out of the Ballroom."

There are bound to be more confrontations with the University in the future over this question. As one East Quad resident put it, "No one here is about to stop smoking dope. "