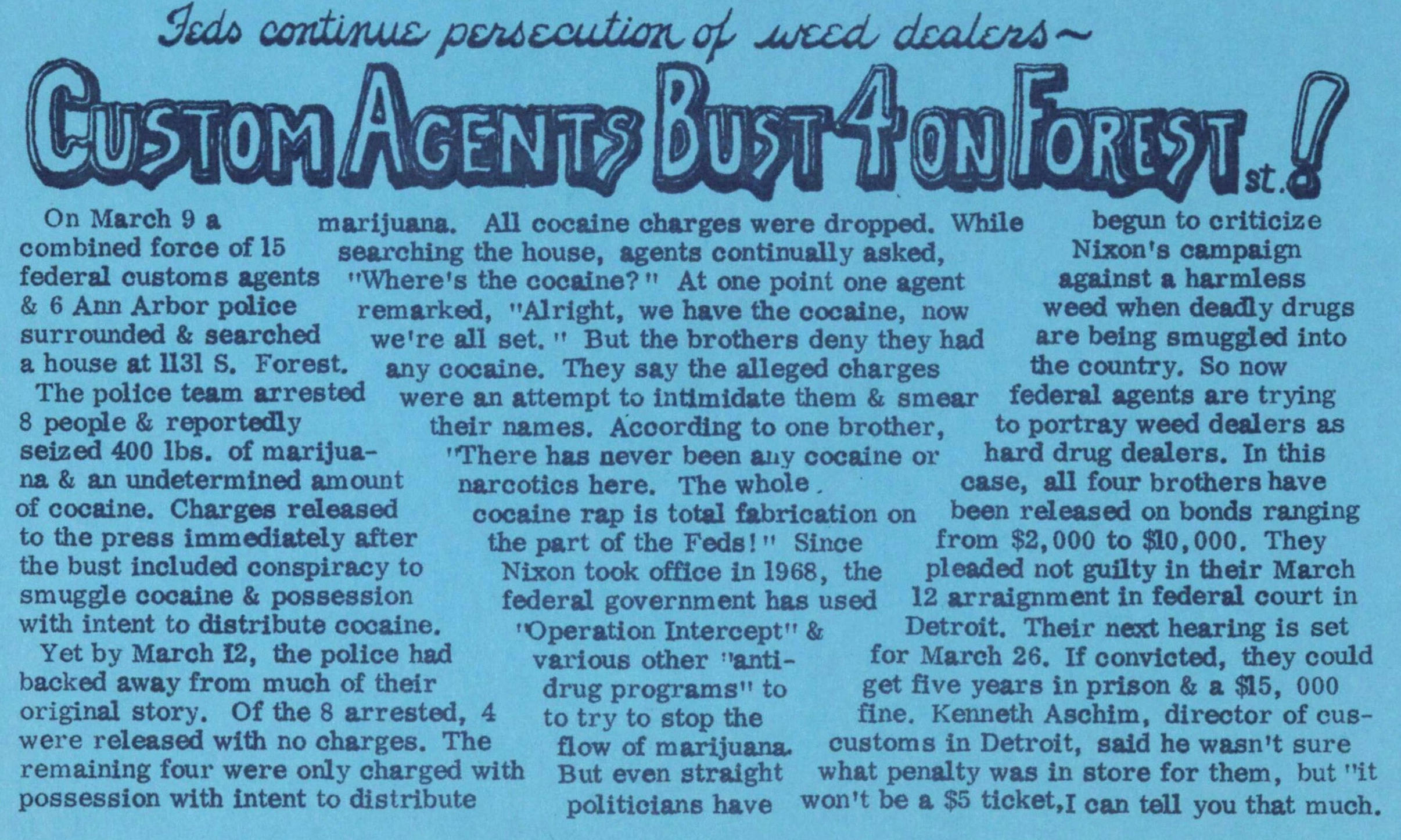 On March 9 a i combined force of 15 federal cus tome agent s & 6 Aun Arbor pólice surrounded & searched a house at 1131 S. Forest. The pólice team arrested 8 people & reportedly seized 400 lbs. of na & an undetermlned amount of cocaïne. Charges released to the press immediately after the bust included conspiracy to smuggle cocaïne & possession with intent to distribute cocaine. Yet by Maroh 12, the pólice had backed away from much of their original story. Oí the 8 arrested, 4 were releas ed wlth no charges. The remaining four were only charged wlth possession with intent to distribute marijuana. All cocaïne charges were dropped. While searching the house, agenta contimially asked, "Where's the cocaïne? " At one point one agent remarked, "Alright, we have the cocaïne, now we 're all set. " But the brothere deny they had any cocaïne. They sav the alleeed charges were an attempt to intimidate them & smear their ñames. Ácoording to one brother, "There has never been any cocaine or narcotics here. The whole . cocaine rap is total fabrication on the part of the Feds! " Sinoe J Nixon took office in 1968, the federal government has used Operation Intercept" & various other "antidrue programs" to to try to stop the flow of marijuana. But even straight politicians have begun to criticize Nixon's campaign against a harmless weed when deadly drugs are being smuggled into the country. So now federal agents are trying to portray weed dealers as hard drug dealers. In this oase, all four brothers have been released on bonds ranging from $2,000 to $10,000. They pleaded not guilty in their March 12 arraignment in federal court in Detroit. Their next hearing is set for Maren 26. If convicted, they could get five years in prison & a $15, 000 flne. Kenneth Aschim, director of customs in Detroit, said he wasn't sure what penalty was in store for them, but "it won 't be a $5 ticket.i Oan teil you that much.