Pun And Craig Still In Jail! Eyewitness Contradicts Charges; But... 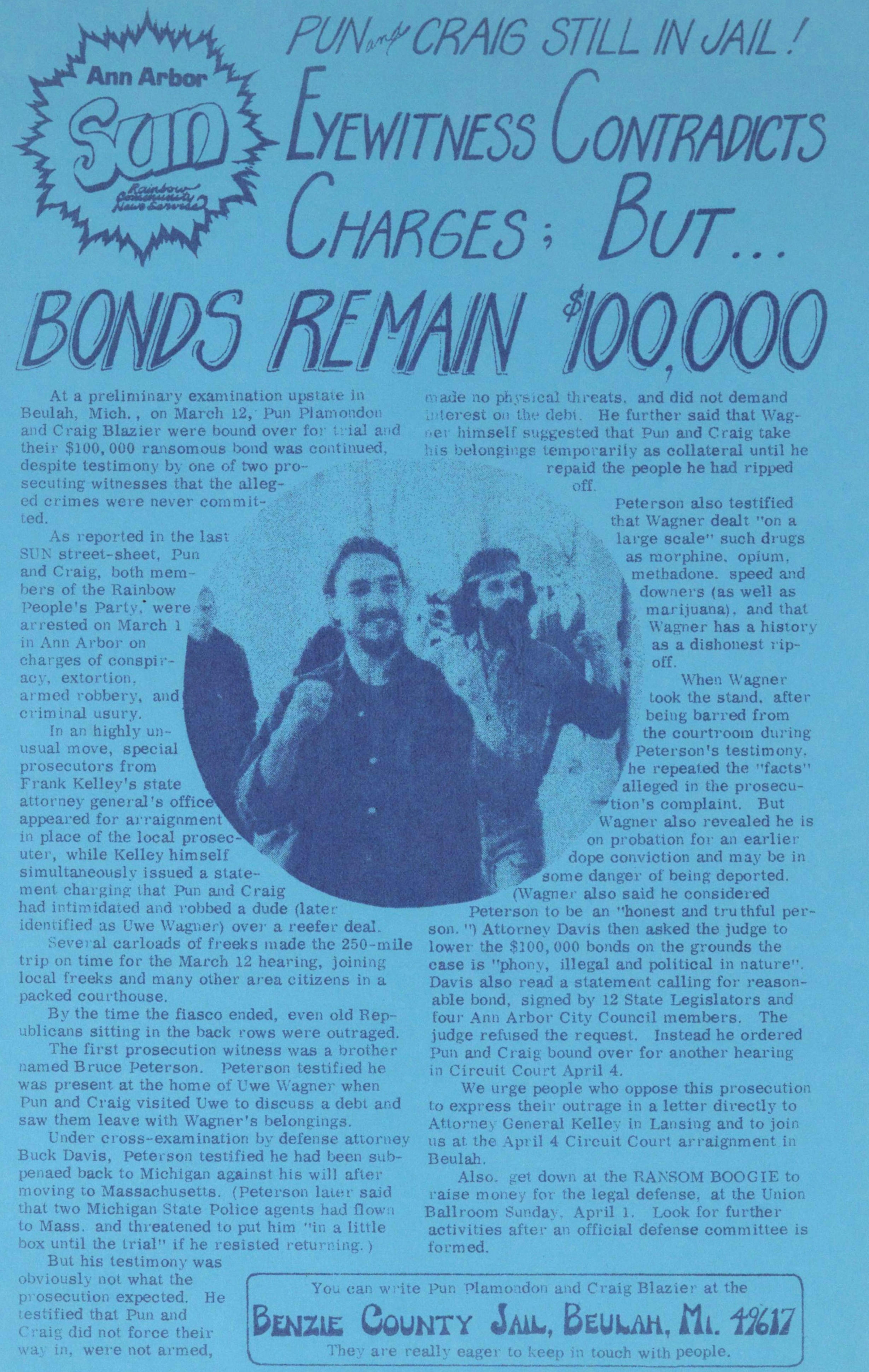 At a preliminary examination upstate Ín Beulah, Mich. , on March 12, Pun Plamondon Craig Blazier were bound over for trail and their 100,000 ransomous bond was continued, despite testimony by one of two prosecuting witnesses that the alleged crimes were never  committed.

As reported in the last  SUN street-sheet, Pun and Craig, both rnembers of the Rainbow People's Party, were arrested on March 1 Ann Arbor on charges of conspiracy extortion armed robbery, and criminal usury.

In an highly unusual move, special prosecutors from Frank Kelley's state attorney general 's office appeared for arraignment in place of the local prosecutor, while Kelley himself simultaneously issued a statement charging that Pun and Craig had intimidated and robbed a dude (later identified as Uwe Wagner) over a reefer deal.

Several carloads of freaks made the 250-mile trip on time for the March 12 hearing, joining local (freaks and many other area citizens in a packed courthouse.

By the time the fiasco ended, even old Republicans sitting in the back rows were outraged.

The first prosecution witness was a brother named Bruce Peterson. Peterson testified he was present at the home of Uwe Wagner when Pun and Craig visited Uwe to discuss a debt and saw them leave with Wagner's belongings.

Under cross-examination by defense attorney Buck Davis, Peterson testified he had been subpoenaed back to Michigan against his will after moving to Massachusetts. (Peterson later said at two Michigan State Police agents had flown to  Mass. and threatened to put him "in a little box until the trial" if he resisted returning.

But his testimony was obviously not what the prosecution expected. He testified that Pun and Craig did not force their way in, were not armed, made no physical threats. and did not demand interest on the debt. He further said that Wagner himself suggested that Pun and Craig take his belongings temporarily as collateral until he repaid the people he had ripped off.

Peterson also testified that Wagner dealt "on a large scale" such drugs as morphine. opium, methadone. speed and downers (as well as marijuana). and that Wagner has a history as a dishonest ripoff.

When Wagner took the stand, after being barred from the courtroom during Peterson's testimony. he repeated the "facts" alleged in the prosecution's complaint. But Wagner also revealed he is on probation for an earlier  dope conviction and may be in some danger of being deported. (Wagner also said he considered Peterson lo be an "honest and truthful person.") Attorney Davis then asked the judge to lower the $100, 000 bonds on the grounds the case is "phony, illegal and political in nature". Davis also read a statement calling for reasonable bond, signed by 12 State Legislators and four Ann Arbor City Council members. The judge refused the request. Instead he ordered and Craig bound over for another hearing Circuit Court April 4.

We urge people who oppose this prosecution lo express their outrage in a letter directly to Attorney General Kelley in Lansing and to join us at the April 4 Circuit Court arraignment Beulah.

Also get down at the RANSOM BOOGIE to raise money  for the legal defense, at the Union Ballroom Sunday, April l. Look for further activities after an official defense committee is formed.

You can write Pun Plamondon and Craig Blazier at the

They are really eager to keep in touch with people.