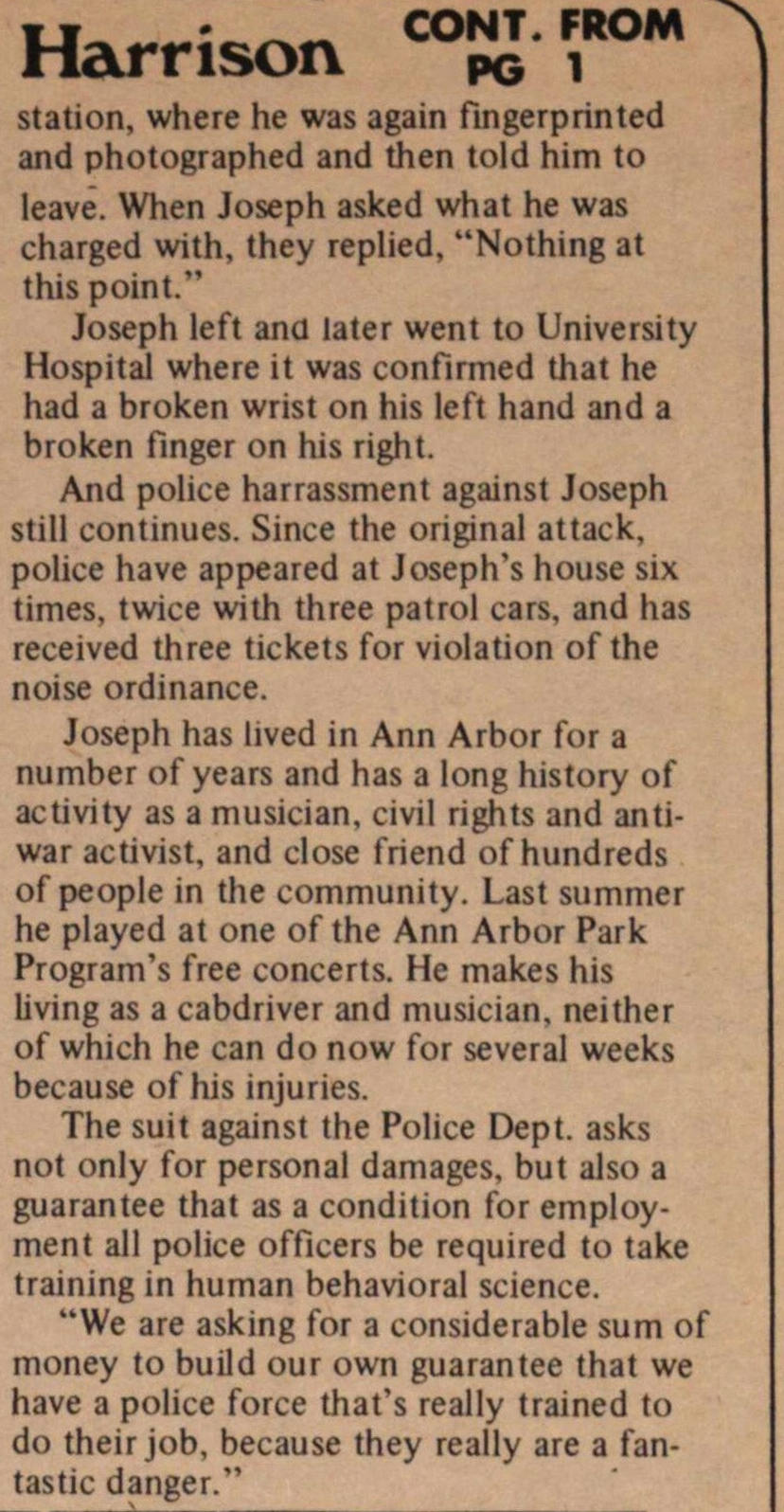 Ann Arbor police arrived at Joseph Harrison's house last week to break up a small party of jazz musicians and ended up beating him up and breaking both of his hands.

"I consider this unprovoked attack against me completely inexcusable," Harrison told the SUN, and a $5 million suit asking for damages has been brought against the cops.

The incident took place Wed. night, April 11, when Joseph and a few friends were playing some music on his front porch at 818 Gott St. Around 8 p.m. Ann Arbor police officers Willard and Brooks came up to the house and told them the music was too loud.

The officers returned to their patrol car, but a short time later, when Joseph and two other people started to go in the house, the police shined a spotlight on them and demanded that they come over to the car. Because he had no shoes or jacket on, Harrison replied, "No, I won't come over there, but you can come over here if you want." The officers came running, apparently viewing Joseph's statement as some sort of threat.

The first one on the porch demanded identification and when Joseph offered to go in the house to get his ID, the officer replied, "No, we're used to that kind of set up."

At this point, Joseph heard his front door open and when he turned to see who it was, one of the officers attacked him, thinking Joseph was trying to escape. He held him down while the other officer demanded that Joseph get up. When Joseph didn't get up, both cops proceeded to beat him and finally dragged him into the patrol car.

At the Police Station, Joseph was questioned, photographed, and fingerprinted. When his lawyer called, police refused to allow them to talk.

When asked if he was hurt, he replied, "Of course I'm hurt." Although both of his hands were broken, he had been handcuffed since he was attacked.

The police forced him to go to St. Joseph's Hospital. Once there the police ordered him to sit on a chair and when he told them it was too difficult with the handcuffs on, they told him, "It's a felony to disobey a direct order of a policeman."

Joseph told them he wouldn't tell them his name and the doctor told him that they wouldn't treat him if he didn't cooperate with the police.

The police then took him back to the

"The police have been unleased since the Republican takeover,"