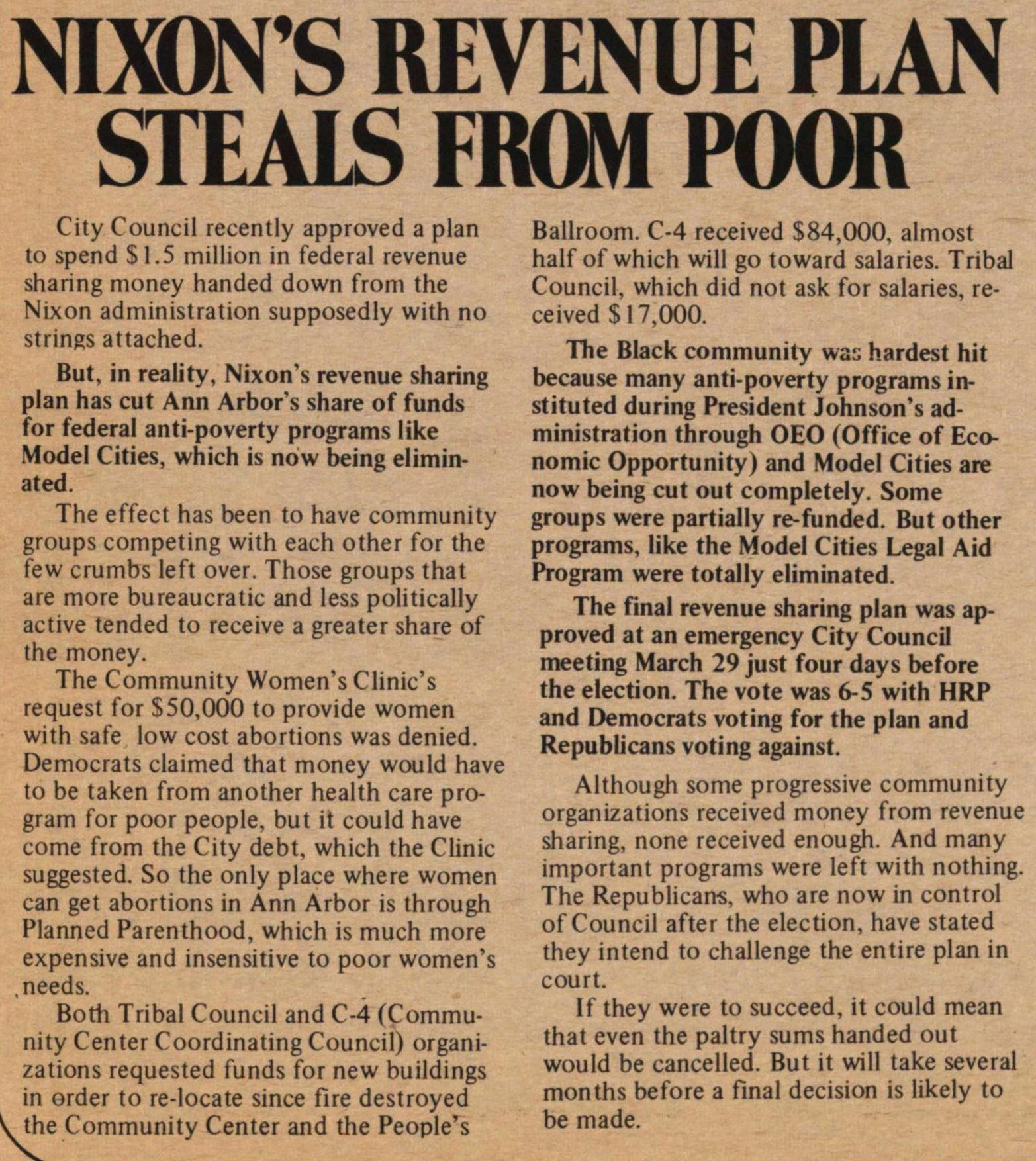 City Council recently approved a plan to spend S1.5 million in federal revenue sharing money handed down from the Nixon administration supposedly with no strings attached.

But, in reality, Nixon's revenue sharing plan has cut Ann Arbor's share of funds for federal anti-poverty programs like Model Cities, which is now being eliminated.

The effect has been to have community groups competing with each other for the few crumbs left over. Those groups that are more bureaucratic and less politically active tended to receive a greater share of the money.

The Community Women's Clinic's request for $50,000 to provide women with safe low cost abortions was denied. Democrats claimed that money would have to be taken from another health care program for poor people, but it could have come from the City debt, which the Clinic suggested. So the only place where women can get abortions in Ann Arbor is through Planned Parenthood, which is much more expensive and insensitive to poor women's needs.

Both Tribal Council and C-4 (Community Center Coordinating Council) organizations requested funds for new buildings in order to re-locate since fire destroyed the Community Center and the People's Ballroom. C-4 received $84,000, almost half of which will go toward salaries. Tribal Council, which did not ask for salaries, received $ 17,000.

The Black community was hardest hit because many anti-poverty programs instituted during President Johnson's administration through OEO (Office of Economic Opportunity) and Model Cities are now being cut out completely. Some groups were partially re-funded. But other programs, like the Model Cities Legal Aid Program were totally eliminated.

The Final revenue sharing plan was approved at an emergency City Council meeting March 29 just four days before the election. The vote was 6-5 with HRP and Democrats voting for the plan and Republicans voting against.

Although some progressive community organizations received money from revenue sharing, none received enough. And many important programs were left with nothing. The Republicans, who are now in control of Council after the election, have stated they intend to challenge the entire plan in court.

If they were to succeed, it could mean that even the paltry sums handed out would be cancelled. But it will take several months before a final decision is likely to be made.