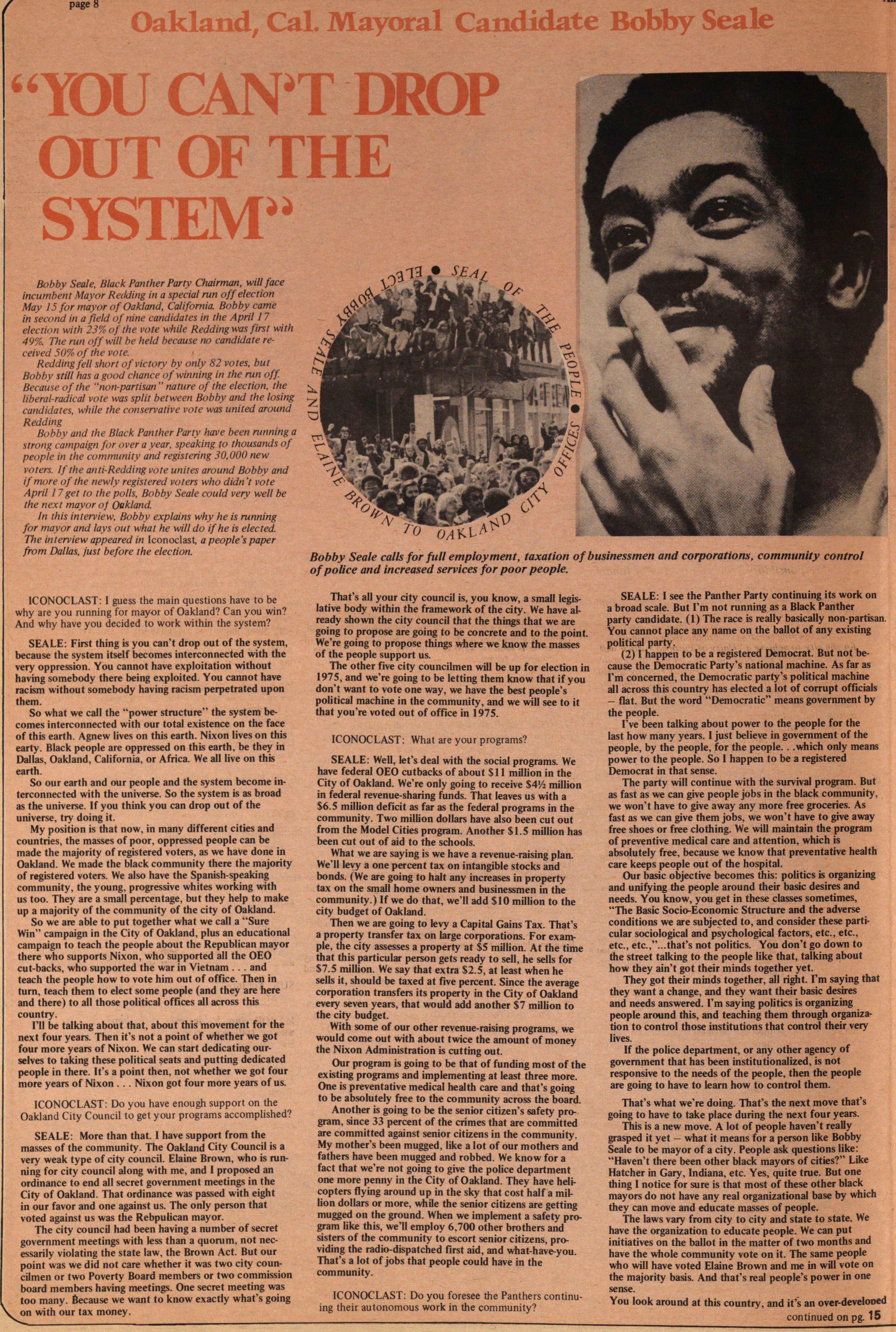 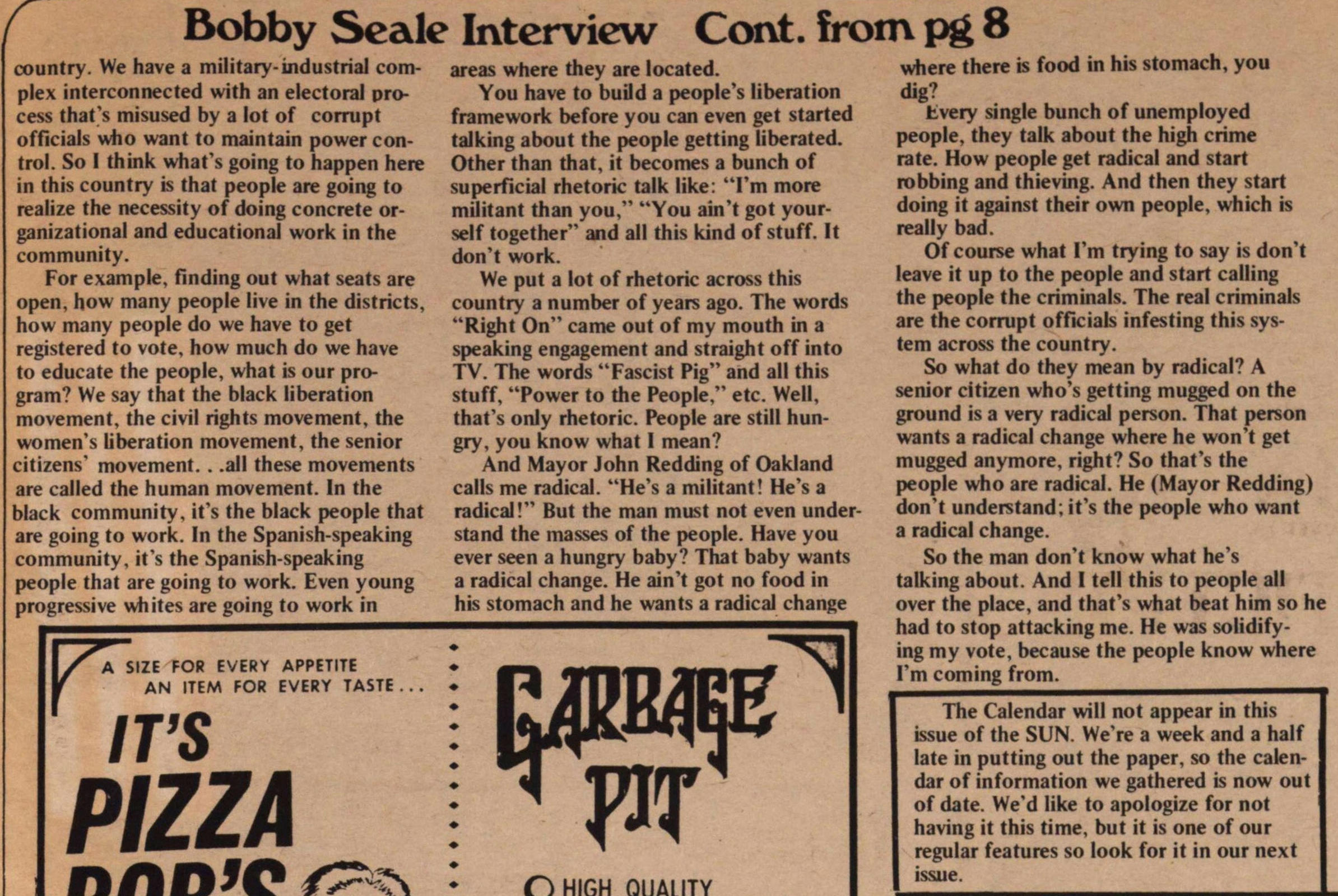 "YOU CAN'T DROP OUT OF THE SYSTEM"

Bobby Seale. Black Panther Party Chairman, will face incumbent Mayor Redding in a special run off election May 15 for mayor of Oakland, California. Bobby came in second in a field of nine candidates in the April 17 election with 23% of the vote while Redding was first with 49%. The run off will be held because no candidate received 50% of the vote.

Redding fell short of victory by only 82 votes, but Bobby still has a good chance of winning in the run off. Because of the "non-partisan" nature of the election, the liberal-radical vote was split between Bobby and the losing candidates, while the conservative vote was united around Redding.

Bobby and the Black Panther Party have been running a strong campaign for over a year, speaking to thousands of people in the community and registering 30,000 new voters. If the anti-Redding vote unites around Bobby and if more of the newly registered voters who didn't vote April 17 get to the polls. Bobby Seale could very well be the next mayor of Oakland.

In this interview, Bobby explains why he is running for mayor and lays out what he will do if he is elected. The interview appeared in Iconoclast, a people's paper from Dallas, just before the election.

ICONOCLAST: I guess the main questions have to be why are you running for mayor of Oakland? Can you win? And why have you decided to work within the system?

SEALE: First thing is you can't drop out of the system, because the system itself becomes interconnected with the very oppression. You cannot have exploitation without having somebody there being exploited. You cannot have racism without somebody having racism perpetrated upon them.

So we are able to put together what we call a "Sure Win" campaign in the City of Oakland, plus an educational campaign to teach the people about the Republican mayor there who supports Nixon, who supported all the OEO cut-backs, who supported the war in Vietnam . . . and teach the people how to vote him out of office. Then in turn, teach them to elect some people (and they are here and there) to all those political offices all across this country.

ICONOCLAST: Do you have enough support on the Oakland City Council to get your programs accomplished?

SEALE: More than that. I have support from the masses of the community. The Oakland City Council is a very weak type of city council. Elaine Brown, who is running for city council along with me, and I proposed an ordinance to end all secret government meetings in the City of Oakland. That ordinance was passed with eight in our favor and one against us. The only person that voted against us was the Republican mayor.

The city council had been having a number of secret government meetings with less than a quorum, not necessarily violating the state law, the Brown Act. But our point was we did not care whether it was two city councilmen or two Poverty Board members or two commission board members having meetings. One secret meeting was too many. Because we want to know exactly what's going on with our tax money.

The other five city councilmen will be up for election in 1975, and we're going to be letting them know that if you don't want to vote one way, we have the best people's political machine in the community, and we will see to it that you're voted out of office in 1975.

ICONOCLAST: What are your programs?

SEALE: Well, let's deal with the social programs. We have federal OEO cutbacks of about $11 million in the City of Oakland. We're only going to receive $4 1/2 million in federal revenue-sharing funds. That leaves us with a $6.5 million deficit as far as the federal programs in the community. Two million dollars have also been cut out from the Model Cities program. Another $1.5 million has been cut out of aid to the schools.

What we are saying is we have a revenue-raising plan. We'll levy a one percent tax on intangible stocks and bonds. (We are going to halt any increases in property tax on the small home owners and businessmen in the community.) If we do that, we'll add $10 million to the city budget of Oakland.

Then we are going to levy a Capital Gains Tax. That's a property transfer tax on large corporations. For example, the city assesses a property at $5 million. At the time that this particular person gets ready to sell, he sells for $7.5 million. We say that extra $2.5, at least when he sells it, should be taxed at five percent. Since the average corporation transfers its property in the City of Oakland every seven years, that would add another $7 million to the city budget.

With some of our other revenue-raising programs, we would come out with about twice the amount of money the Nixon Administration is cutting out.

Our program is going to be that of funding most of the existing programs and implementing at least three more. One is preventative medical health care and that's going to be absolutely free to the community across the board.

Another is going to be the senior citizen's safety program, since 33 percent of the crimes that are committed are committed against senior citizens in the community. My mother's been mugged, like a lot of our mothers and fathers have been mugged and robbed. We know for a fact that we're not going to give the police department one more penny in the City of Oakland. They have helicopters flying around up in the sky that cost half a million dollars or more, white the senior citizens are getting mugged on the ground. When we implement a safety program like this, we'll employ 6,700 other brothers and sisters of the community to escort senior citizens, providing the radio-dispatched first aid, and what-have-you. That's a lot of jobs that people could have in the community.

ICONOCLAST: Do you foresee the Panthers continuing their autonomous work in the community?

SEALE: I see the Panther Party continuing its work on a broad scale. But I'm not running as a Black Panther party candidate. (1) The race is really basically non-partisan. You cannot place any name on the ballot of any existing political party.

(2) I happen to be a registered Democrat. But not because the Democratic Party's national machine. As far as I'm concerned, the Democratic party's political machine all across this country has elected a lot of corrupt officials - flat. But the word "Democratic" means government by the people.

Our basic objective becomes this: politics is organizing and unifying the people around their basic desires and needs. You know, you get in these classes sometimes, "The Basic Socio-Economic Structure and the adverse conditions we are subjected to, and consider these particular sociological and psychological factors, etc., etc., etc., etc.,"...that's not politics. You don't go down to the street talking to the people like that, talking about how they ain't got their minds together yet.

They got their minds together, all right. I'm saying that they want a change, and they want their basic desires and needs answered. I'm saying politics is organizing people around this, and teaching them through organization to control those institutions that control their very lives.

If the police department, or any other agency of government that has been institutionalized, is not responsive to the needs of the people, then the people are going to have to learn how to control them.

That's what we're doing. That's the next move that's going to have to take place during the next four years.

This is a new move. A lot of people haven't really grasped it yet - what it means for a person like Bobby Seale to be mayor of a city. People ask questions like: "Haven't there been other black mayors of cities?" Like Hatcher in Gary, Indiana, etc. Yes, quite true. But one thing I notice for sure is that most of these other black mayors do not have any real organizational base by which they can move and educate masses of people.

The laws vary from city to city and state to state. We have the organization to educate people. We can put initiatives on the ballot in the matter of two months and have the whole community vote on it. The same people who will have voted Elaine Brown and me in will vote on the majority basis. And that's real people's power in one sense.

You look around at this country, and it's an over-developed country. We have a military-industrial complex interconnected with an electoral process that's misused by a lot of corrupt officials who want to maintain power control. So I think what's going to happen here in this country is that people are going to realize the necessity of doing concrete organizational and educational work in the community.

For example, finding out what seats are open, how many people live in the districts, how many people do we have to get registered to vote, how much do we have to educate the people, what is our program? We say that the black liberation movement, the civil rights movement, the women's liberation movement, the senior citizens" movement. . .all these movements are called the human movement. In the black community, it's the black people that are going to work. In the Spanish-speaking community, it's the Spanish-speaking people that are going to work. Even young progressive whites are going to work in areas where they are located.

You have to build a people's liberation framework before you can even get started talking about the people getting liberated. Other than that, it becomes a bunch of superficial rhetoric talk like: "I'm more militant than you," "You ain't got yourself together" and all this kind of stuff. It don't work.

We put a lot of rhetoric across this country a number of years ago. The words "Right On" came out of my mouth in a speaking engagement and straight off into TV. The words "Fascist Pig" and all this stuff, "Power to the People," etc. Well, that's only rhetoric. People are still hungry, you know what I mean?

Every single bunch of unemployed people, they talk about the high crime rate. How people get radical and start robbing and thieving. And then they start doing it against their own people, which is really bad.

Of course what I'm trying to say is don't leave it up to the people and start calling the people the criminals. The real criminals are the corrupt officials infesting this system across the country.

So the man don't know what he's talking about. And I tell this to people all over the place, and that's what beat him so he had to stop attacking me. He was solidifying my vote, because the people know where I'm coming from.

The Calendar will not appear in this issue of the SUN. We're a week and a half late in putting out the paper, so the calendar of information we gathered is now out of date. We'd like to apologize for not having it this time, but it is one of our regular features so look for it in our next issue.