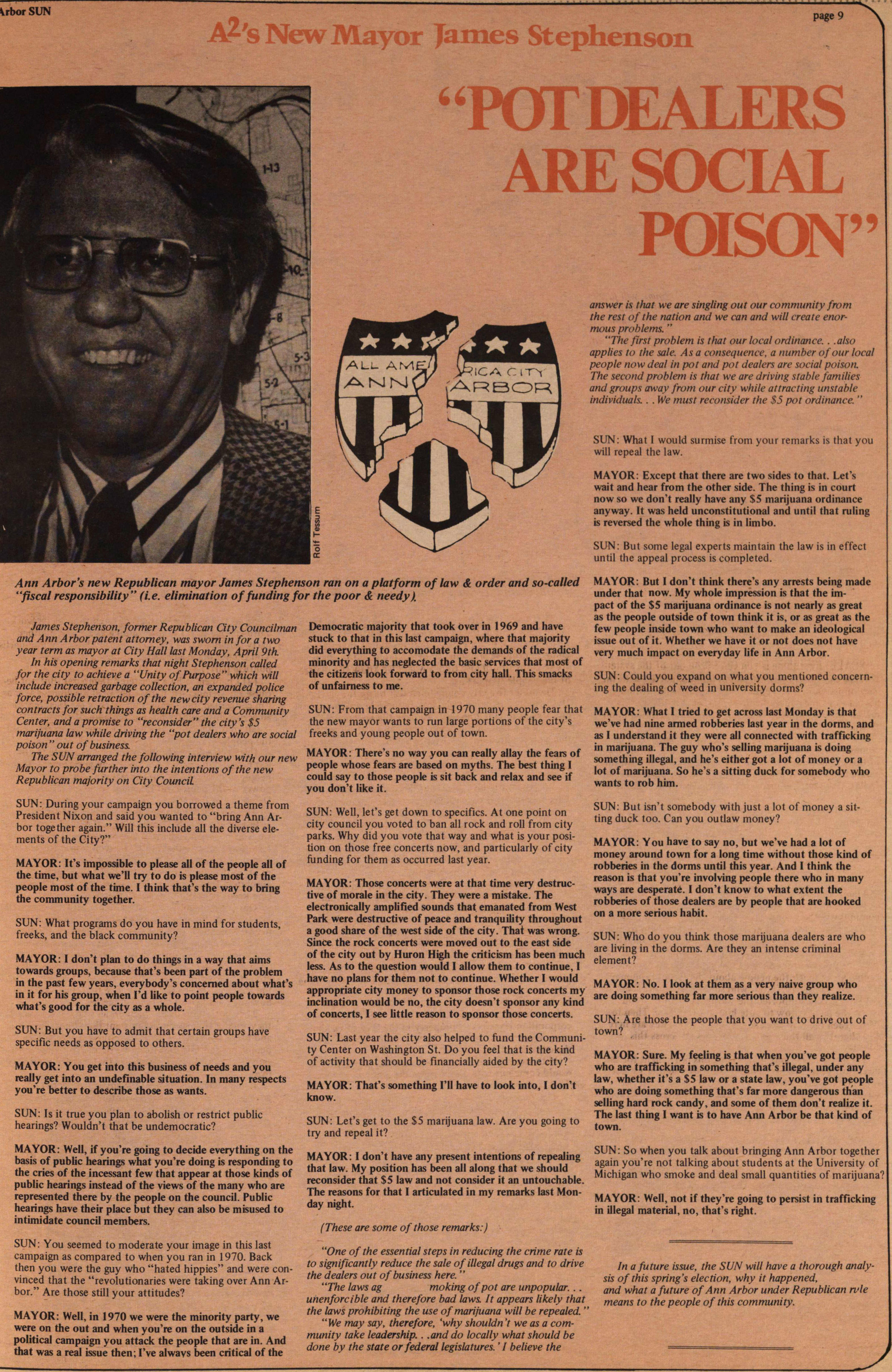 James Stephenson, former Republican City Councilman and Ann Arbor patent attorney, was sworn in for a two-year term as mayor at City Hall last Monday, April 9th In his opening remarks that night Stephenson called for the city to achieve a "Unity of Purpose" which will include increased garbage collection, an expanded police force, possible retraction of the new city revenue sharing contracts for such things as health care and a Community Center, and a promise to "reconsider" the city's $5 marijuana law while driving the "pot dealers who are social poison " out of business.

The SUN arranged the following interview with our new Mayor to probe further into the intentions of the new Republican majority on City Council.

SUN: During your campaign you borrowed a theme from President Nixon and said you wanted to "bring Ann Arbor together again." Will this include all the diverse elements of the City?"

SUN: What programs do you have in mind for students, freeks, and the black community?

MAYOR: I don't plan to do things in a way that aims towards groups, because that's been part of the problem in the past few years, everybody's concerned about what's in it for his group, when I'd like to point people towards what's good for the city as a whole.

SUN: But you have to admit that certain groups have specific needs as opposed to others.

MAYOR: You get into this business of needs and you really get into an undefinable situation. In many respects you're better to describe those as wants.

SUN: Is it true you plan to abolish or restrict public hearings? Wouldn't that be undemocratic?

MAYOR: Well, if you're going to decide everything on the basis of public hearings what you're doing is respondí ng to the cries of the incessant few that appear at those kinds of public hearings instead of the views of the many who are represented there by the people on the council. Public hearings have their place but they can also be misused to intimídate council members.

SUN: You seemed to moderate your image in this last campaign as compared to when you ran in 1 970. Back then you were the guy who "hated hippies" and were convinced that the "revolutionaries were taking over Ann Arbor." Are those still your attitudes?

MAYOR: Well, in 1970 we were the minority party, we were on the out and when you're on the outside in a political campaign you attack the people that are in. And that was a real issue then; I've always been critical of the Democratic majority that took over in 1969 and have stuck to that in this last campaign, where that majority did everything to accommodate the demands of the radical minority and has neglected the basic services that most of the citizens look forward to from city hall. This smacks of unfairness to me.

SUN: From that campaign in 1970 many people fear that the new mayor wants to run large portions of the city's freeks and young people out of town.

MAYOR: There's no way you can really allay the fears of people whose fears are based on myths. The best thing I couïd say to those people is sit back and relax and see if you don't like it.

SUN: Well, let's get down to specifics. At one point on city council you voted to ban all rock and roll from city parks. Why did you vote that way and what is your position on those free concerts now, and particularly of city funding for them as occurred last year?

MAYOR: Those concerts were at that time very destructive of morale in the city. They were a mistake. The electronically amplified sounds that emanated from West Park were destructive of peace and tranquility throughout a good share of the west side of the city. That was wrong. Since the rock concerts were moved out to the east side of the city out by Huron High the criticism has been much less. As to the question would I allow them to continue, I have no plans for them not to continue. Whether I would appropriate city money to sponsor those rock concerts my inclination would be no, the city doesn't sponsor any kind of concerts, I see little reason to sponsor those concerts.

SUN: Last year the city also helped to fund the Community Center on Washington St. Do you feel that is the kind of activity that should be fïnancially aided by the city?

MAYOR: That's something I'll have to look into, I don't know.

SUN: Let's get to the $5 marijuana law. Are you going to try and repeal it?

MAYOR: I don't have any present intentions of repealing that law. My position has been all along that we should reconsider that $5 law and not consider it an untouchable. The reasons for that I articulated in my remarks last Monday night. (These are some of those remarks:) "One of the essential steps in reducing the crime rate is to significantly reduce the sale of illegal drugs and to drive the dealers out of business here. " "The laws ag moking of pot are unpopular. . . unenforcible and therefore bad laws. It appears likely that the laws prohibiting the use of marijuana will be repealed. " "We may say, therefore, 'why shouldn't we as a community take leadership. . .and do locally what should be done by the state or federal legislatures. ' I believe the answer is that we are singling out our community front the rest of the nation and we can and will create enormous problems. " "The first problem is that our local ordinance. . .also applies to the sale. As a consequence. a number of our local people now deal in pot and pot dealers are social poison, The second problem is that we are driving stable families and groups away from our city while attracting unstable individuals. . . We must reconsider the $5 pot ordinance. "

SUN: What I would surmise from your remarks is that you will repeal the law.

MAYOR: Except that there are two sides to that. Let's wait and hear from the other side. The thing is in court now so we don't really have any $5 marijuana ordinance anyway. It was held unconstitutional and until that ruling is reversed the whole thing is in limbo.

SUN: But some legal experts maintain the law is in effect until the appeal process is completed.

MAYOR: But I don't think there's any arrest s being made under that now. My whole impression is that the impact of the $5 marijuana ordinance is not nearly as great as the people outside of town think it is, or as great as the few people inside town who want to make an ideological issue out of it. Whether we have it or not does not have very much impact on everyday life in Ann Arbor.

SUN: Could you expand on what you mentioned concerning the dealing of weed in university dorms?

MAYOR: What I tried to get across last Monday is that we've had nine armed robberies last year in the dorms, and as I understand it they were all connected with trafficking in marijuana. The guy who's selling marijuana is doing something illegal, and he's either got a lot of money or a lot of marijuana. So he's a sitting duck for somebody who wants to rob him.

SUN: But isn't somebody with just a lot of money a sitting duck too. Can you outlaw money?

MAYOR: You have to say no, but we've had a lot of money around town for a long time without those kind of robberies in the dorms until this year. And I think the reason is that you're involving people there who in many ways are desperate. I don't know to what extent the robberies of those dealers are by people that are hooked on a more serious habit.

SUN: Who do you think those marijuana dealers are who are living in the dorms. Are they an intense criminal element?

MAYOR: No. I look at them as a very naive group who are doing something far more serious than they realize.

SUN: Are those the people that you want to drive out of town?

MAYOR: Sure. My feeling is that when you've got people who are trafficking in something that's illegal, under any law, whether it's a $5 law or a state law, you've got people who are doing something that's far more dangerous than selling hard rock candy, and some of them don't realize it. The last thing I want is to have Ann Arbor be that kind of town.

SUN: So when you talk about bringing Ann Arbor together again you're not talking about students at the University of Michigan who smoke and deal small quantities of marijuana?

MAYOR: Well, not if they're going to persist in trafficking in illegal material, no, that's right.

In a future issue, the SUN will have a thorough analysis of this spring's election, why it happened, and what the future of Ann Arbor under Republican rule means to the people of this community.