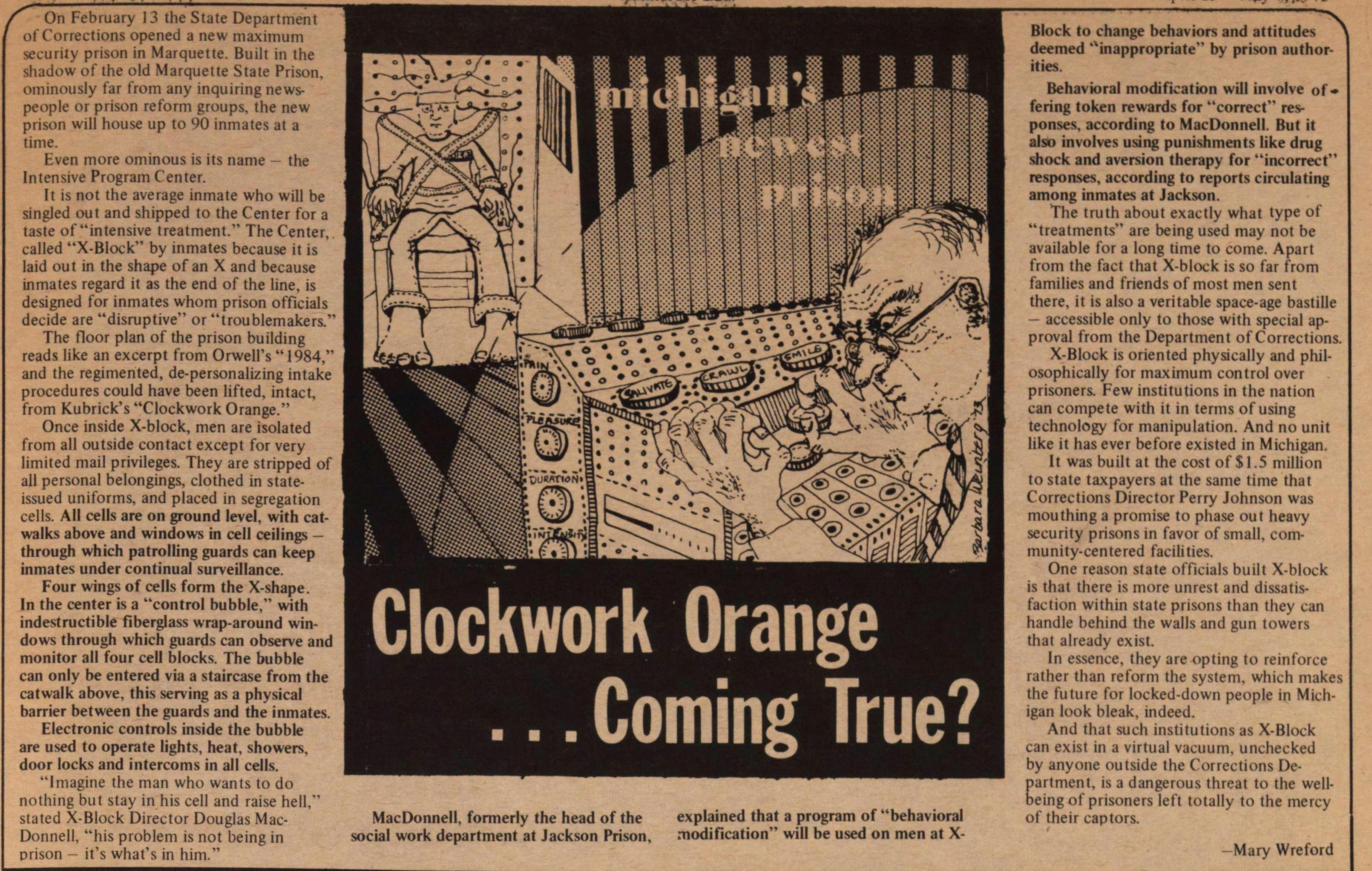 On February 13 the State Department of Corrections opened a new maximum security prison n Marquette. Built in the shadow of the old Marquette State Prison, ominously far from any inquiring newspeople or prison reform groups, the new prison will house up to 90 inmates at a time.

Even more ominous is its name - the Intensive Program Center. It is not the average inmate who will be singled out and shipped to the Center for a taste of "intensive treatment." The Center, called "X-Block" by inmates because it is laid out in the shape of an X and because inmates regard it as the end of the line, is designed for inmates whom prison officials decide are "disruptive" or"troublemakers."

The floor plan of the prison building reads like an excerpt from Orwell's "1984," and the regimented, de-personalizing intake procedures could have been lifted, intact, from Kubrick's "Clockwork Orange."

Once inside X-block, men are isolated from all outside contact except for very limited mail privileges. They are stripped of all personal belongings, clothed in state-issued uniforms, and placed in segregation cells. All cells are on ground level, with catwalks above and windows in cell ceilings - through which patrolling guards can keep inmates under continual surveillance.

Four wings of cells form the X-shape. In the center s a "control bubble," with indestructible fiberglass wrap-around windows through which guards can observe and monitor all four cell blocks. The bubble can only be entered via a staircase from the catwalk above, this serving as a physical barrier between the guards and the inmates. Electronic controls inside the bubble are used to operate lights, heat, showers, door locks and intercoms in all cells.

"Imagine the man who wants to do nothing but stay in his cell and raise hell," stated X-Block Director Douglas MacDonnell, "his problem is not being in prison - it's what's in him."

MacDonnell, formerly the head of the social work department at Jackson Prison, explained that a program of "behavioral modification" will be used on men at Block to change behaviors and attitudes deemed 'Inappropriate" by prison authorities.

The truth about exactly what type of "treatments" are being used may not be available for a long time to come. Apart from the fact that X-block is so far from families and friends of most men sent there, it is also a veritable space-age Bastille - accessible only to those with special approval from the Department of Corrections.

X-Block is oriented physically and philosophically for maximum control over prisoners. Few institutions in the nation can compete with it in terms of using technology for manipulation. And no unit like it has ever before existed in Michigan.

It was built at the cost of $1.5 million to state taxpayers at the same time that Corrections Director Perry Johnson was mouthing a promise to phase out heavy security prisons in favor of small, community-centered facilities.

One reason state officials built X-block is that there is more unrest and dissatisfaction within state prisons than they can handle behind the walls and gun towers that already exist.

In essence, they are opting to reinforce rather than reform the system, which makes the future for locked-down people in Michigan look bleak, indeed.

And that such institutions as X-Block can exist in a virtual vacuum, unchecked by anyone outside the Corrections Department, is a dangerous threat to the wellbeing of prisoners left totally to the mercy of their captors.