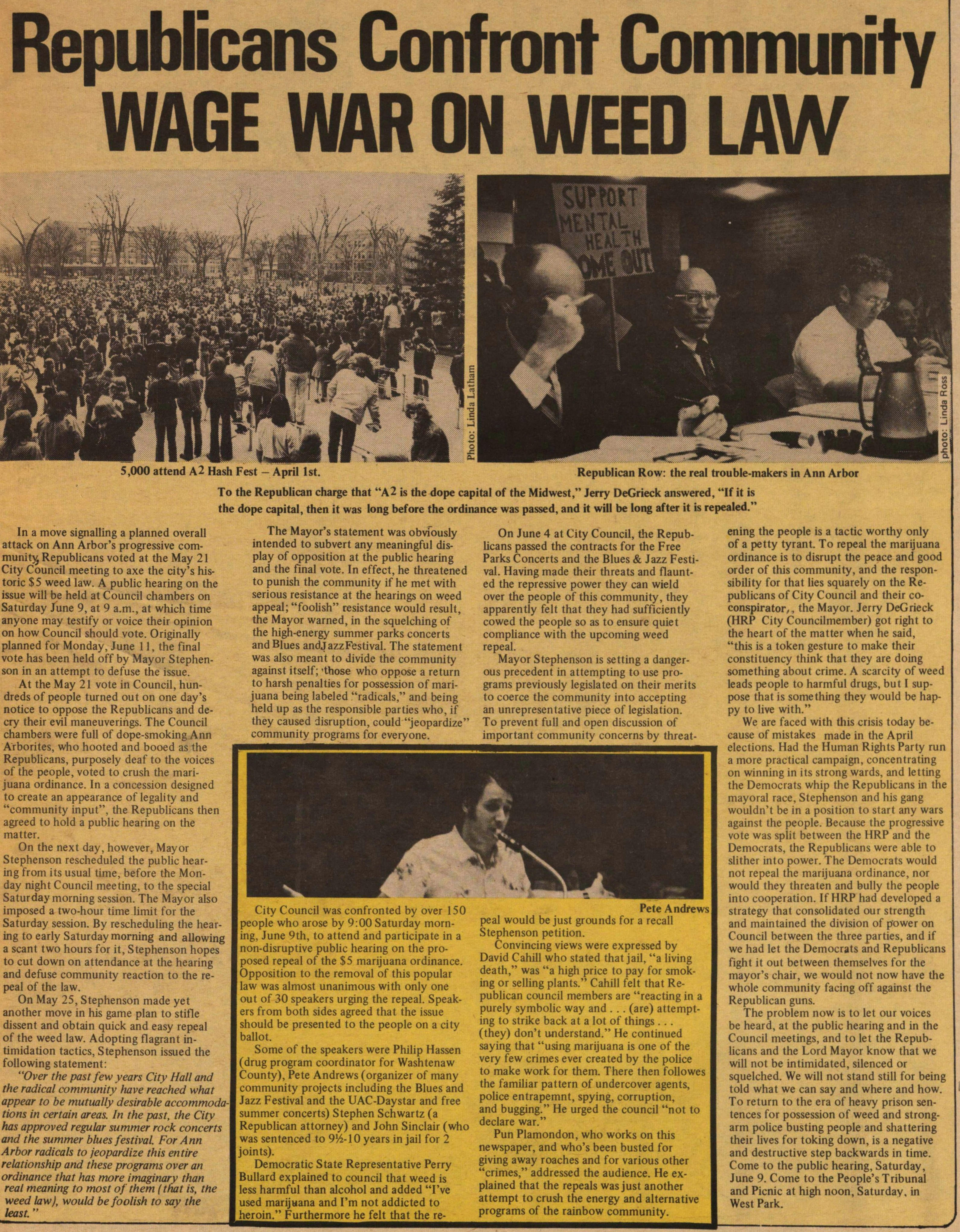 In a move signaling a planned overall attack on Ann Arbor's progressive community Republicans voted at the May 21 City Council meeting to axe the city's historic $5 weed law. A public hearing on the issue will be held at Council chambers on Saturday June 9, at 9 a.m., at which time anyone may testify or voice their opinion on how Council should vote. Originally planned for Monday, June 11 , the final vote has been held off by Mayor Stephenson in an attempt to defuse the issue.
At the May 21 vote in Council, hundreds of people turned out on one day's notice to oppose the Republicans and decry their evil maneuverings. The Council chambers were full of dope-smoking Ann Arborites, who hooted and booed as the Republicans, purposely deaf to the voices of the people, voted to crush the marijuana ordinance. In a concession designed to create an appearance of legality and "community input", the Republicans then agreed to hold a public hearing on the matter.
On the next day, however, Mayor Stephenson rescheduled the public hearing from its usual time, before the Monday night Council meeting, to the special Saturday morning session. The Mayor also imposed a two-hour time limit for the Saturday session. By rescheduling the hearing to early Saturday morning and allowing a scant two hours for it, Stephenson hopes to cut down on attendance at the hearing and defuse community reaction to the repeal of the law.
On May 25, Stephenson made yet another move in his game plan to stifle dissent and obtain quick and easy repeal of the weed law. Adopting flagrant intimidation tactics, Stephenson issued the following statement:
"Over the past few years City Hall and the radical community have reached what appear to be mutually desirable accommodations in certain areas. In the past, the City has approved regular summer rock concerts and the summer blues festival. For Ann Arbor radicals to jeopardize this entire relationship and these programs over an ordinance that has more imaginary than real meaning to most of them (that is, the weed law), would be foolish to say the least. "
The Mayor's statement was obviously intended to subvert any meaningful display of opposition at the public hearing and the final vote. In effect, he threatened to punish the community if he met with serious resistance at the hearings on weed appeal; "foolish" resistance would result, the Mayor warned, in the squelching of the high-energy summer parks concerts and Blues and Jazz Festival. The statement was also meant to divide the community against itself; 'those who oppose a return to harsh penalties for possession of marijuana being labeled "radicals," and being held up as the responsible parties who, if they caused disruption, could "jeopardize" community programs for everyone.
On June 4 at City Council, the Republicans passed the contracts for the Free Parks Concerts and the Blues & Jazz Festival. Having made their threats and flaunted the repressive power they can wield over the people of this community, they apparently felt that they had sufficiently cowed the people so as to ensure quiet compliance with the upcoming weed repeal.
Mayor Stephenson is setting a dangerous precedent in attempting to use programs previously legislated on their merits to coerce the community into accepting an unrepresentative piece of legislation. To prevent full and open discussion of important community concerns by ening the people is a tactic worthy only of a petty tyrant. To repeal the marijuana ordinance is to disrupt the peace and good order of this community, and the responsibility for that lies squarely on the Republicans of City Council and their coconspirator, , the Mayor. Jerry DeGrieck (HRP City Councilmember) got right to the heart of the matter when he said, "this is a token gesture to make their constituency think that they are doing something about crime. A scarcity of weed leads people to harmful drugs, but I suppose that is something they would be happy to live with."
We are faced with this crisis today because of mistakes made in the April elections. Had the Human Rights Party run a more practical campaign, concentrating on winning in its strong wards, and letting the Democrats whip the Republicans in the mayoral race, Stephenson and his gang wouldn't be in a position to start any wars against the people. Because the progressive vote was split between the HRP and the Democrats, the Republicans were able to slither into power. The Democrats would not repeal the marijuana ordinance, nor would they threaten and bully the people into cooperation. If HRP had developed a strategy that consolidated our strength and maintained the division of power on Council between the three parties, and if we had let the Democrats and Republicans fight it out between themselves for the mayor's chair, we would not now have the whole community facing off against the Republican guns.
The problem now is to let our voices be heard, at the public hearing and in the Council meetings, and to let the Republicans and the Lord Mayor know that we will not be intimidated, silenced or squelched. We will not stand still for being told what we can say and where and how. To return to the era of heavy prison sentences for possession of weed and strongarm police busting people and shattering their lives for toking down, is a negative and destructive step backwards in time. Come to the public hearing, Saturday, June 9. Come to the People's Tribunal and Picnic at high noon, Saturday, in West Park.

City Council was confronted by over 150 people who arose by 9:00 Saturday morning, June 9th, to attend and participate in a non-disruptive public hearing on the proposed repeal of the $5 marijuana ordinance. Opposition to the removal of this popular law was almost unanimous with only one out of 30 speakers urging the repeal. Speakers from both sides agreed that the issue should be presented to the people on a city ballot.
Some of the speakers were Philip Hassen (drug program coordinator for Washtenaw County), Pete Andrews (organizer of many community projects including the Blues and Jazz Festival and the UAC-Daystar and free summer concerts) Stephen Schwartz (a Republican attorney) and John Sinclair (who was sentenced to 9 1/2-10 years in jail for 2 joints).
Democratic State Representative Perry Bullard explained to council that weed is less harmful than alcohol and added "I've used marijuana and I'm not addicted to heroin." Furthermore he felt that the repeal would be just grounds for a recall Stephenson petition.
Convincing views were expressed by David Cahill who stated that jail, "a living death," was "a high price to pay for smoking or selling plants." Cahill felt that Republican council members are "reacting in a purely symbolic way and . . . (are) attempting to strike back at a lot of things . . . (they) don't understand." He continued saying that "using marijuana is one of the very few crimes ever created by the police to make work for them. There then followers the familiar pattern of undercover agents, police entrapment, spying, corruption, and bugging." He urged the council "not to declare war."
Pun Plamondon, who works on this newspaper, and who's been busted for giving away roaches and for various other "crimes," addressed the audience. He explained that the repeals was just another attempt to crush the energy and alternative programs of the rainbow community.