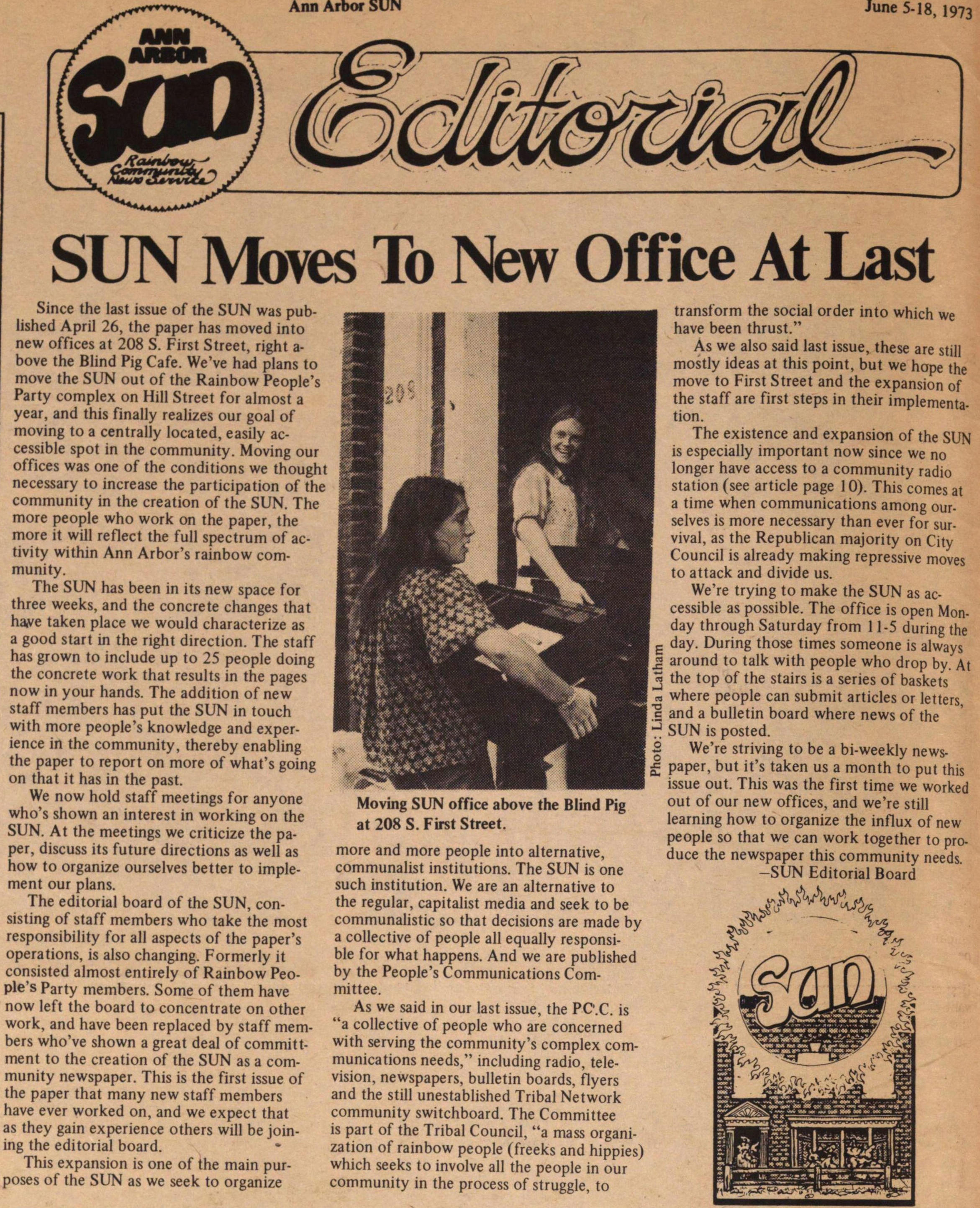 Since the last issue of the SUN was published April 26, the paper has moved into new offices at 208 S. First Street, right above the Blind Pig Cafe. We've had plans to move the SUN out of the Rainbow People's Party complex on Hill Street for almost a year, and this finally realizes our goal of moving to a centrally located, easily accessible spot in the community. Moving our offices was one of the conditions we thought necessary to increase the participation of the community in the creation of the SUN. The more people who work on the paper, the more it will reflect the full spectrum of activity within Ann Arbor's rainbow community.
The SUN has been in its new space for three weeks, and the concrete changes that have taken place we would characterize as a good start in the right direction. The staff has grown to include up to 25 people doing the concrete work that results in the pages now in your hands. The addition of new staff members has put the SUN in touch with more people's knowledge and experience in the community, thereby enabling the paper to report on more of what's going on that it has in the past.
We now hold staff meetings for anyone who's shown an interest in working on the SUN. At the meetings we criticize the paper, discuss its future directions as well as how to organize ourselves better to implement our plans.
The editorial board of the SUN, consisting of staff members who take the most responsibility for all aspects of the paper's operations, is also changing. Formerly it consisted almost entirely of Rainbow People's Party members. Some of them have now left the board to concentrate on other work, and have been replaced by staff members who've shown a great deal of committment to the creation of the SUN as a community newspaper. This is the first issue of the paper that many new staff members have ever worked on, and we expect that as they gain experience others will be joining the editorial board.
This expansion is one of the main purposes of the SUN as we seek to organize more and more people into alternative, communalist institutions. The SUN is one such institution. We are an alternative to the regular, capitalist media and seek to be communalistic so that decisions are made by a collective of people all equally responsible for what happens. And we are published by the People's Communications Committee.
As we said in our last issue, the PC'.C. is "a collective of people who are concerned with serving the community's complex communications needs," including radio, televisión, newspapers, bulletin boards, flyers and the still unestablished Tribal Network community switchboard. The Committee is part of the Tribal Council, "a mass organization of rainbow people (freeks and hippies) which seeks to involve all the people in our community in the process of struggle, to transform the social order into which we have been thrust."
As we also said last issue, these are still mostly ideas at this point, but we hope the move to First Street and the expansion of the staff are first steps in their implementation.
The existence and expansion of the SUN is especially important now since we no longer have access to a community radio station (see article page 10). This comes at a time when Communications among ourselves is more necessary than ever for survival, as the Republican majority on City Council is already making repressive moves to attack and divide us.
We're trying to make the SUN as accessible as possible. The office is open Monday through Saturday from 11-5 during the day. During those times someone is always around to talk with people who drop by. At the top of the stairs is a series of baskets where people can submit articles or letters, and a bulletin board where news of the SUN is posted.
We're striving to be a bi-weekly newspaper, but it's taken us a month to put this issue out. This was the first time we worked out of our new offices, and we're still learning how to organize the influx of new people so that we can work together to produce the newspaper this community needs.