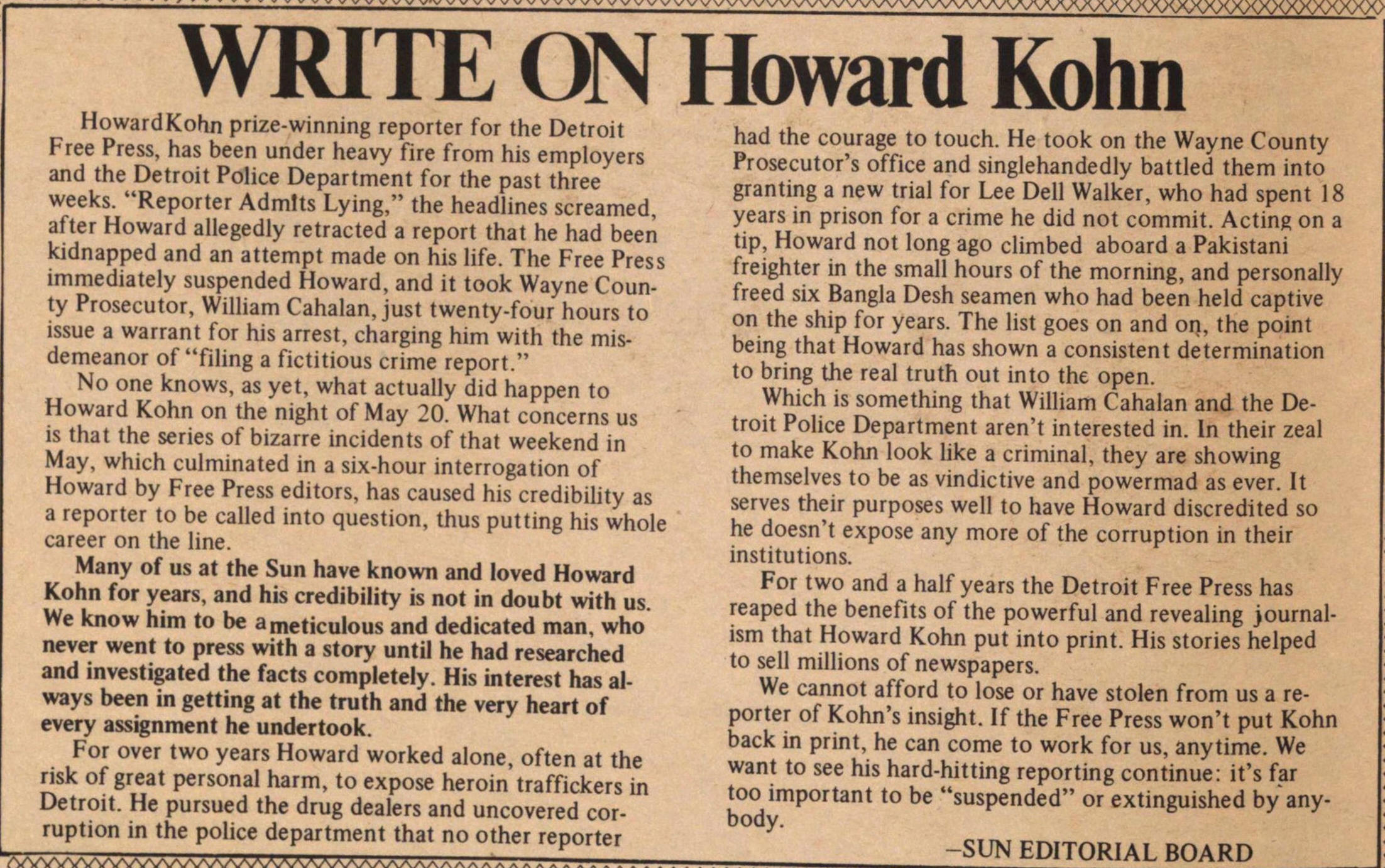 Howard Kohn prize-winning reporter for the Detroit Free Press, has been under heavy fire from his employers and the Detroit Police Department for the past three weeks. "Reporter Admits Lying," the headlines screamed, after Howard allegedly retracted a report that he had been kidnapped and an attempt made on his life. The Free Press immediately suspended Howard, and it took Wayne County Prosecutor, William Cahalan, just twenty-four hours to issue a warrant for his arrest, charging him with the misdemeanor of "filing a fictitious crime report." No one knows, as yet, what actually did happen to Howard Kohn on the night of May 20. What concerns us is that the series of bizarre incidents of that weekend in May, which culminated in a six-hour interrogation of Howard by Free Press editors, has caused his credibility as a reporter to be called into question, thus putting his whole career on the line.
Many of us at the Sun have known and loved Howard Kohn for years, and his credibility is not in doubt with us. We know him to be a meticulous and dedicated man, who never went to press with a story until he had researched and investigated the facts completely. His interest has always been in getting at the truth and the very heart of every assignment he undertook.
For over two years Howard worked alone, often at the risk of great personal harm, to expose heroin traffickers in Detroit. He pursued the drug dealers and uncovered corruption in the police department that no other reporter had the courage to touch. He took on the Wayne County Prosecutor's office and singlehandedly battled them into granting a new trial for Lee Dell Walker, who had spent 18 years in prison for a crime he did not commit. Acting on a tip, Howard not long ago climbed aboard a Pakistani freighter in the small hours of the morning, and personally freed six Bangla Desh seamen who had been held captive on the ship for years. The list goes on and on, the point being that Howard has shown a consistent determination to bring the real truth out into the open.
Which is something that William Cahalan and the Detroit Police Department aren't interested in. In their zeal to make Kohn look like a criminal, they are showing themselves to be as vindictive and powermad as ever. It serves their purposes well to have Howard discredited so he doesn't expose any more of the corruption in their institutions.
For two and a half years the Detroit Free Press has reaped the benefits of the powerful and revealing journalism that Howard Kohn put into print. His stories helped to sell millions of newspapers.
We cannot afford to lose or have stolen from us a reporter of Kohn's insight. If the Free Press won't put Kohn back in print, he can come to work for us, anytime. We want to see his hard-hitting reporting continue: it's far too important to be "suspended" or extinguished by anybody.