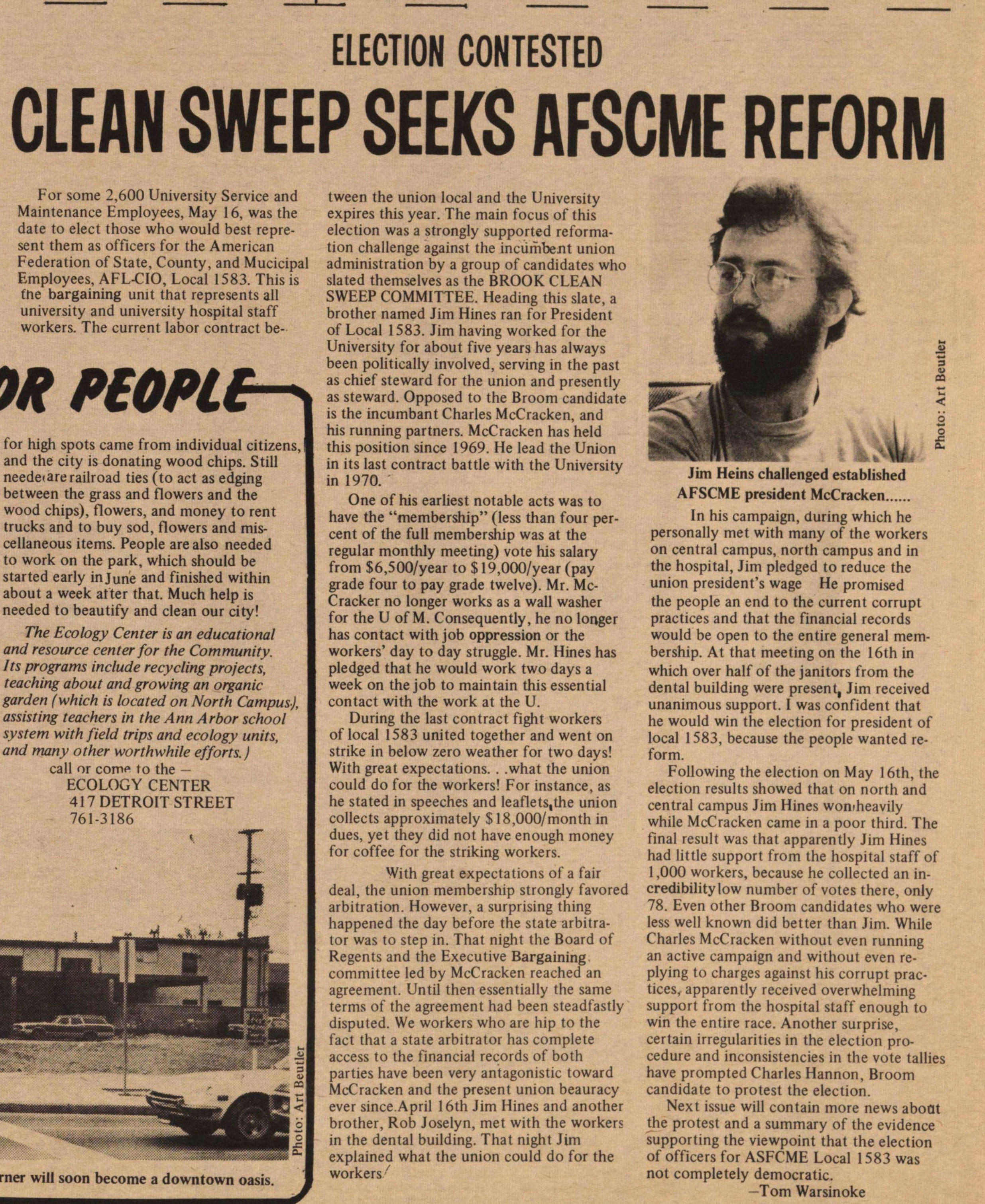 For some 2,600 University Service and Maintenance Employees, May 16, was the date to elect those who would best represent them as officers for the American Federation of State, County, and Municipal Employees, AFL-CIO, Local 1583. This is the bargaining unit that represents all university and university hospital staff workers. The current labor contract between the union local and the University expires this year. The main focus of this election was a strongly supported reformation challenge against the incumbent union administration by a group of candidates who slated themselves as the BROOK CLEAN SWEEP COMMITTEE. Heading this slate, a brother named Jim Hines ran for President of Local 1583. Jim having worked for the University for about five years has always been politically involved, serving in the past as chief steward for the union and presently as steward. Opposed to the Broom candidate is the incumbent Charles McCracken, and his running partners. McCracken has held this position since 1969. He lead the Union in its last contract battle with the University in 1970.
One of his earliest notable acts was to have the "membership" (less than four percent of the full membership was at the regular monthly meeting) vote his salary from $6,500 year to $19,000 year (pay grade four to pay grade twelve). Mr. McCracker no longer works as a wall washer for the U of M. Consequently, he no longer has contact with job oppression or the workers' day to day struggle. Mr. Hines has pledged that he would work two days a week on the job to maintain this essential contact with the work at the U.
During the last contract fight workers of local 1583 united together and went on strike in below zero weather for two days! With great expectations. . .what the union could do for the workers! For instance, as he stated in speeches and leaflets the union collects approximately $18,000 month in dues, yet they did not have enough money for coffee for the striking workers.
With great expectations of a fair deal, the union membership strongly favored arbitration. However, a surprising thing happened the day before the state arbitrator was to step in. That night the Board of Regents and the Executive Bargaining committee led by McCracken reached an agreement. Until then essentially the same terms of the agreement had been steadfastly disputed. We workers who are hip to the fact that a state arbitrator has complete access to the financial records of both parties have been very antagonistic toward McCracken and the present union bureaucracy ever since. April 16th Jim Hines and another brother, Rob Joselyn, met with the workers in the dental building. That night Jim explained what the union could do for the workers.
In his campaign, during which he personally met with many of the workers on central campus, north campus and in the hospital, Jim pledged to reduce the union president's wage He promised the people an end to the current corrupt practices and that the financial records would be open to the entire general membership. At that meeting on the 16th in which over half of the janitors from the dental building were present, Jim received unanimous support. I was confident that he would win the election for president of local 1583, because the people wanted reform.
Following the election on May 16th, the election results showed that on north and central campus Jim Hiñes won heavily while McCracken came in a poor third. The final result was that apparently Jim Hines had little support from the hospital staff of 1 ,000 workers, because he collected an incredibility low number of votes there, only 78. Even other Broom candidates who were less well known did better than Jim. While Charles McCracken without even running an active campaign and without even replying to charges against his corrupt practices, apparently received overwhelming support from the hospital staff enough to win the entire race. Another surprise, certain irregularities in the election procedure and inconsistencies in the vote tallies have prompted Charles Hannon, Broom candidate to protest the election.
Next issue will contain more news about the protest and a summary of the evidence supporting the viewpoint that the election of officers for ASFCME Local 1 583 was not completely democratic.