School Board Lavs Down Law 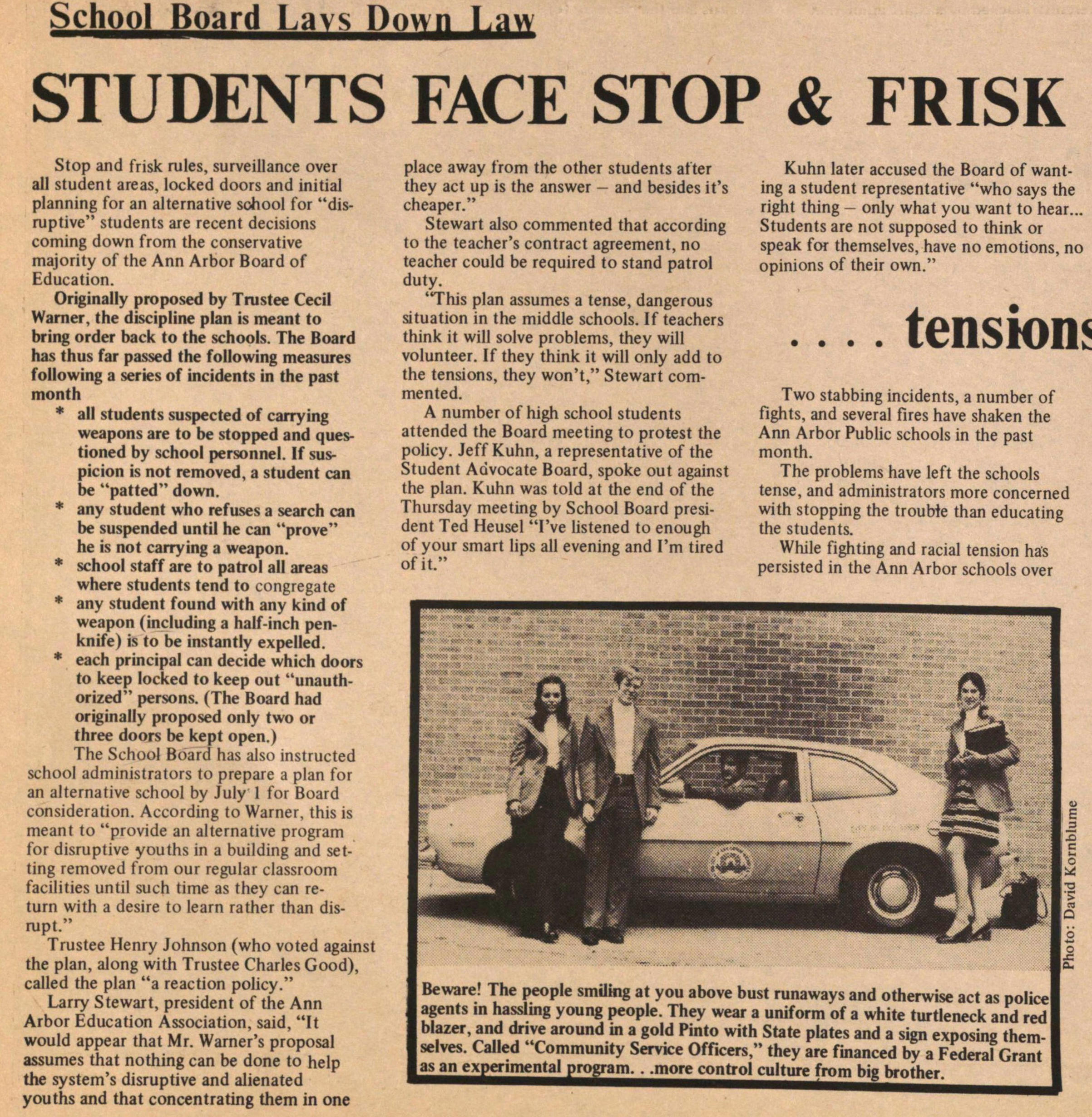 School Board Lays Down Law

Stop and frisk rules, surveillance over all student areas, locked doors and initial planning for an alternative school for "disruptive" students are recent decisions coming down from the conservative majority of the Ann Arbor Board of Education.

Originally proposed by Trustee Cecil Warner, the discipline plan is meant to bring order back to the schools. The Board has thus far passed the following measures following a series of incidents in the past month

*  all students suspected of carrying weapons are to be stopped and questioned by school personnel. If suspicion is not removed, a student can be "patted" down.

*  any student who refuses a search can be suspended until he can "prove" he is not carrying a weapon.

*  any student found with any kind of weapon (including a half-inch penknife) is to be instantly expelled.

*  each principal can decide which doors to keep locked to keep out "unauthorized" persons. (The Board had originally proposed only two or three doors be kept open.)

The School Board has also instructed school administrators to prepare a plan for an alternative school by July 1 for Board consideration. According to Warner, this is meant to "provide an alternative program for disruptive youths in a building and setting removed from our regular classroom facilities until such time as they can return with a desire to learn rather than disrupt."

Trustee Henry Johnson (who voted against the plan, along with Trustee Charles Good), called the plan "a reaction policy."

Larry Stewart, president of the Ann Arbor Education Association, said, "It would appear that Mr. Warner's proposal assumes that nothing can be done to help the system's disruptive and alienated youths and that concentrating them in one place away from the other students after they act up is the answer -- and besides it's cheaper."

Stewart also commented that according to the teacher's contract agreement, no teacher could be required to stand patrol duty.

"This plan assumes a tense, dangerous situation in the middle schools. If teachers think it will solve problems, they will volunteer. If they think it will only add to the tensions, they won't," Stewart commented.

A number of high school students attended the Board meeting to protest the policy. Jeff Kuhn, a representative of the Student Advocate Board, spoke out against the plan. Kuhn was told at the end of the Thursday meeting by School Board president Ted Heusel "I've listened to enough of your smart lips all evening and I'm tired of it."

Kuhn later accused the Board of wanting a student representative "who says the right thing -- only what you want to hear... Students are not supposed to think or speak for themselves, have no emotions, no opinions of their own."

Beware! The people smiling at you above bust runaways and otherwise act as police agents in hassling young people. They wear a uniform of a white turtleneck and red blazer, and drive around in a gold Pinto with State plates and a sign exposing themselves. Called "Community Service Officers," hey are financed by a Federal Grant as an experimental program...more control culture from big brother.
Photo: David Kornblume