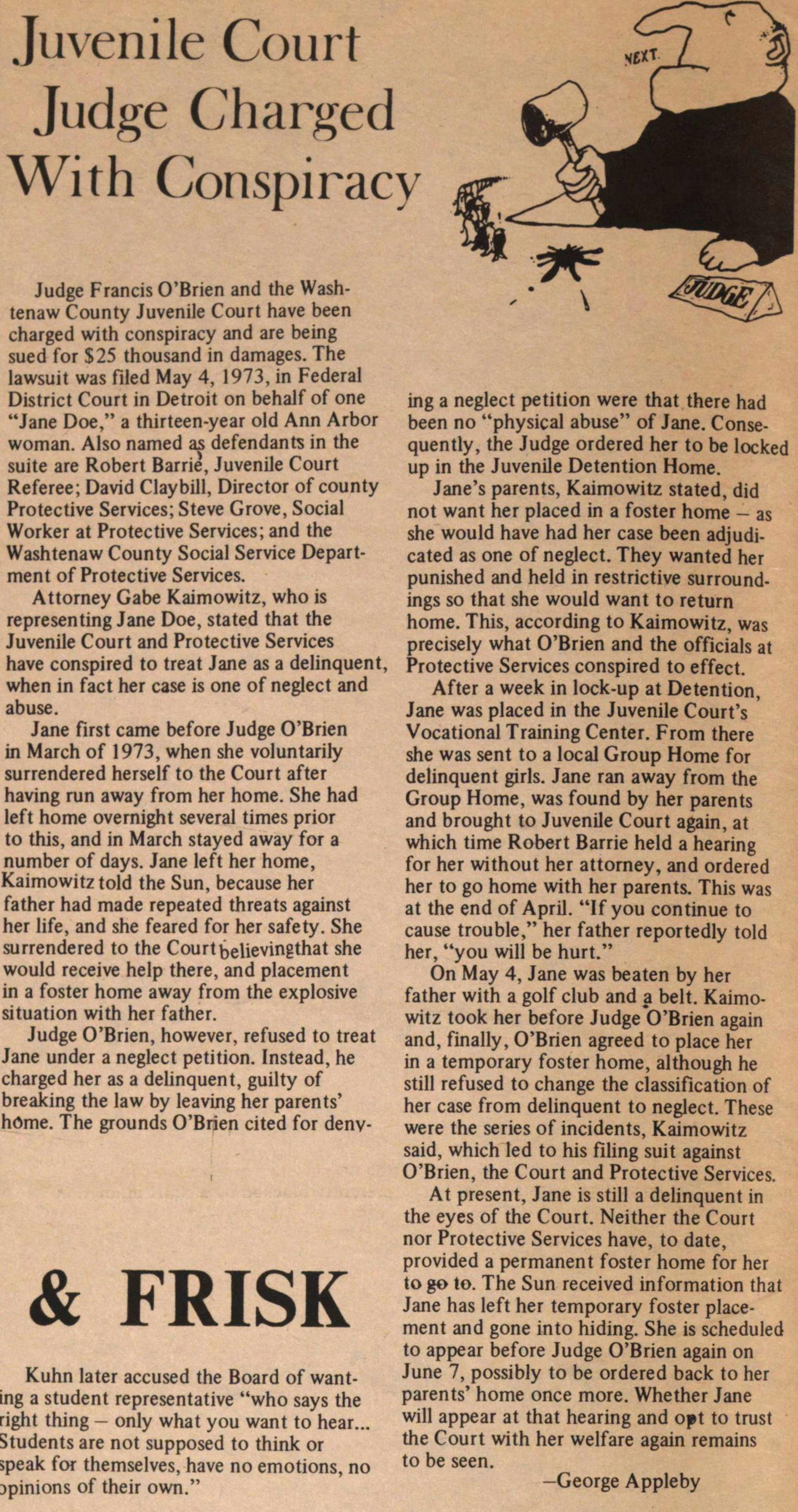 Attorney Gabe Kaimowitz, who is representing Jane Doe, stated that the Juvenile Court and Protective Services have conspired to treat Jane as a delinquent, when in fact her case is one of neglect and abuse.

Jane first came before Judge O'Brien in March of 1973, when she voluntarily surrendered herself to the Court after having run away from her home. She had left home overnight several times prior to this, and in March stayed away for a number of days. Jane left her home, Kaimowitz told the Sun, because her father had made repeated threats against her life, and she feared for her safety. She surrendered to the Court believing that she would receive help there, and placement in a foster home away from the explosive situation with her father.

Judge O'Brien, however, refused to treat Jane under a neglect petition. Instead, he charged her as a delinquent, guilty of breaking the law by leaving her parents' home. The grounds O'Brien cited for denying a neglect petition were that there had been no "physical abuse" of Jane. Consequently, the Judge ordered her to be locked up in the Juvenile Detention Home.

Jane's parents, Kaimowitz stated, did not want her placed in a foster home -- as she would have had her case been adjudicated as one of neglect. They wanted her punished and held in restrictive surroundings so that she would want to return home. This, according to Kaimowitz, was precisely what O'Brien and the officials at Protective Services conspired to effect.

After a week in lock-up at Detention, Jane was placed in the Juvenile Court's Vocational Training Center. From there she was sent to a local Group Home for delinquent girls. Jane ran away from the Group Home, was found by her parents and brought to Juvenile Court again, at which time Robert Barrie held a hearing for her without her attorney, and ordered her to go home with her parents. This was at the end of April. "If you continue to cause trouble," her father reportedly told her, "you will be hurt."

On May 4, Jane was beaten by her father with a golf club and a belt. Kaimowitz took her before Judge O'Brien again and, finally, O'Brien agreed to place her in a temporary foster home, although he still refused to change the classification of her case from delinquent to neglect. These were the series of incidents, Kaimowitz said, which led to his filing suit against O'Brien, the Court and Protective Services.

At present, Jane is still a delinquent in the eyes of the Court. Neither the Court nor Protective Services have, to date, provided a permanent foster home for her to go to. The Sun received information that Jane has left her temporary foster placement and gone into hiding. She is scheduled to appear before Judge O'Brien again on June 7, possibly to be ordered back to her parents' home once more. Whether Jane will appear at that hearing and opt to trust the Court with her welfare again remains to be seen.