It Could Be The Last Rush 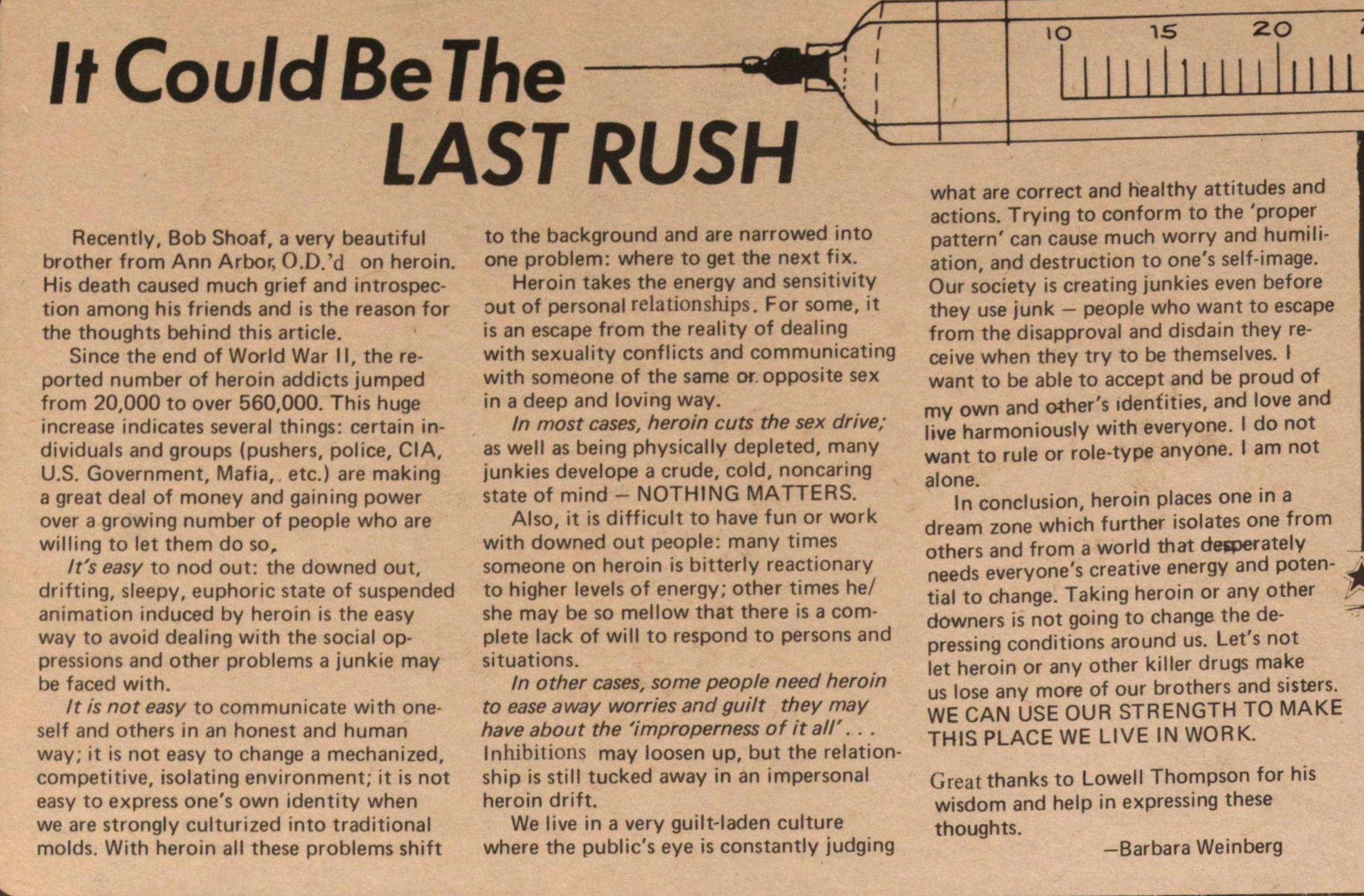 It Could Be The LAST RUSH

Recently, Bob Shoaf, a very beautiful brother from Ann Arbor, O.D.’d on heroin. His death caused much grief and introspection among his friends and is the reason for the thoughts behind this article.

Since the end of World War 1 1, the reported number of heroin addicts jumped from 20,000 to over 560,000. This huge increase indicates several things: certain individuals and groups (pushers, police, CIA, U.S. Government, Mafia, etc.) are making a great deal of money and gaining power over a growing number of people who are willing to let them do so.

It’s easy to nod out: the downed out, drifting, sleepy, euphoric state of suspended animation induced by heroin is the easy way to avoid dealing with the social oppressions and other problems a junkie may be faced with.

It is not easy to communicate with oneself and others in an honest and human way; it is not easy to change a mechanized, competitive, isolating environment; it is not easy to express one’s own identity when we are strongly culturized into traditional molds. With heroin all these problems shift to the background and are narrowed into one problem: where to get the next fix.

Heroin takes the energy and sensitivity out of personal relationships. For some, it is an escape from the reality of dealing with sexuality conflicts and communicating with someone of the same or opposite sex in a deep and loving way.

In most cases, heroin cuts the sex drive; as well as being physically depleted, many junkies develop a crude, cold, noncaring state of mind – NOTHING MATTERS.

Also, it is difficult to have fun or work with downed out people: many times someone on heroin is bitterly reactionary to higher levels of energy; other times he she may be so mellow that there is a complete lack of will to respond to persons and situations.

In other cases, some people need heroin to ease away worries and guilt they may have about the ‘improperness of it all’ . . . Inhibitions may loosen up, but the relationship is still tucked away in an impersonal heroin drift.

We live in a very guilt-laden culture where the public’s eye is constantly judging what are correct and healthy attitudes and actions. Trying to conform to the ‘proper pattern’ can cause much worry and humiliation, and destruction to one’s self-image. Our society is creating junkies even before they use junk – people who want to escape from the disapproval and disdain they receive when they try to be themselves. I want to be able to accept and be proud of my own and other’s identities, and love and live harmoniously with everyone. I do not want to rule or role-type anyone. I am not alone.

In conclusion, heroin places one in a dream zone which further isolates one from others and from a world that desperately needs everyone’s creative energy and potential to change. Taking heroin or any other downers is not going to change the depressing conditions around us. Let’s not let heroin or any other killer drugs make us lose any more of our brothers and sisters. WE CAN USE OUR STRENGTH TO MAKE THIS PLACE WE LIVE IN WORK.

Great thanks to Lowell Thompson for his wisdom and help in expressing these thoughts.