A2 Turns Out For First Free Concert! 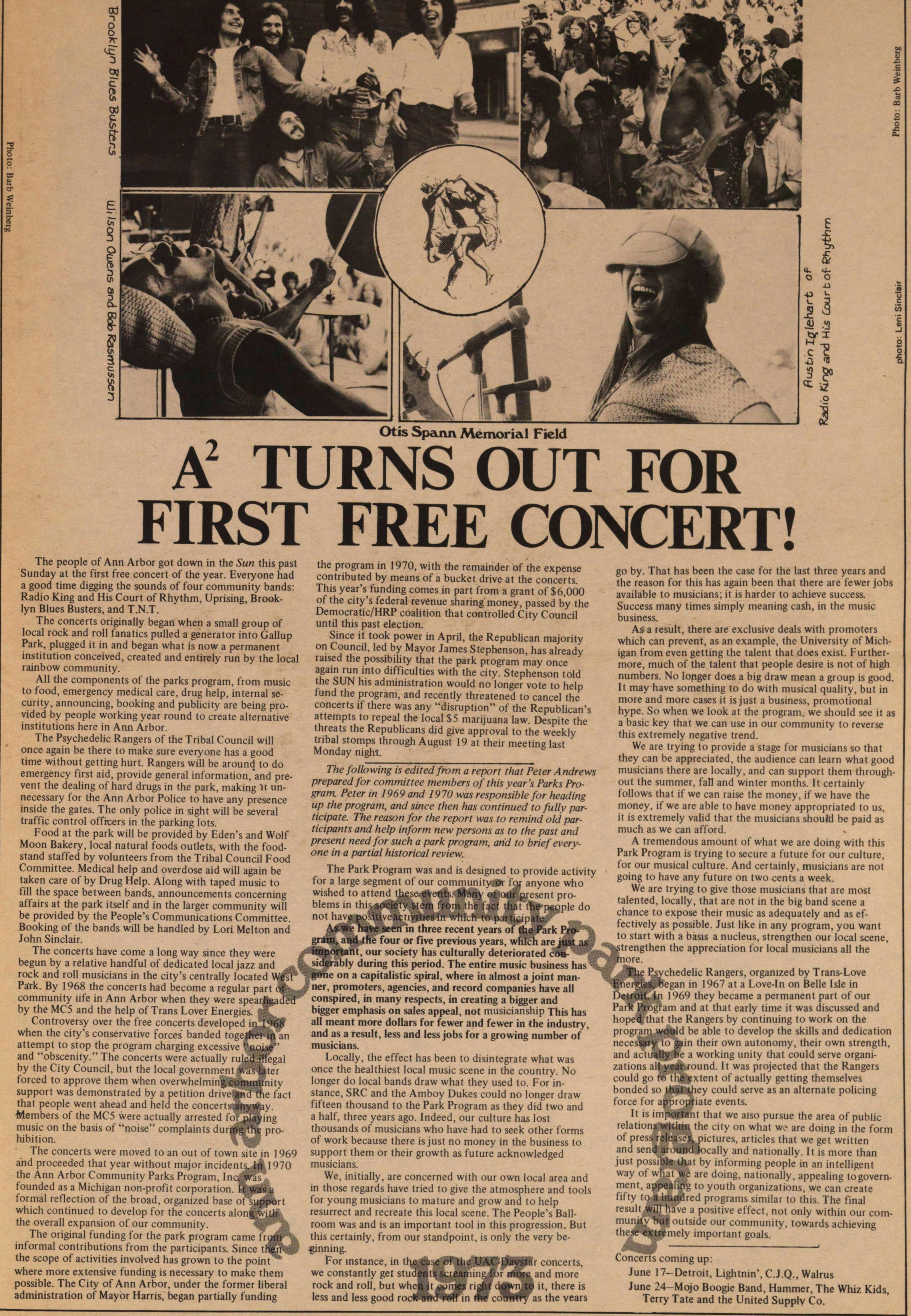 A2 TURNS OUT FOR FIRST FREE CONCERT!

The people of Ann Arbor got down in the Sun this past Sunday at the first free concert of the year. Everyone had a good time digging the sounds of four community bands: Radio King and His Court of Rhythm, Uprising, Brooklyn Blues Busters, and T.N.T.

The concerts originally began when a small group of local rock and roll fanatics pulled a generator into Gallup Park, plugged it in and began what is now a permanent institution conceived, created and entirely run by the local rainbow community.

All the components of the parks program, from music to food, emergency medical care, drug help, internal security, announcing, booking and publicity are being provided by people working year-round to create alternative institutions here in Ann Arbor.

The Psychedelic Rangers of the Tribal Council will once again be there to make sure everyone has a good time without getting hurt. Rangers will be around to do emergency first aid, provide general information, and prevent the dealing of hard drugs in the park, making it unnecessary for the Ann Arbor Police to have any presence inside the gates. The only police in sight will be several traffic control officers in the parking lots.

Food at the park will be provided by Eden’s and Wolf Moon Bakery, local natural foods outlets, with the food-stand staffed by volunteers from the Tribal Council Food Committee. Medical help and overdose aid will again be taken care of by Drug Help. Along with taped music to fill the space between bands, announcements concerning affairs at the park itself and in the larger community will be provided by the People’s Communications Committee. Booking of the bands will be handled by Lori Melton and John Sinclair.

The concerts have come a long way since they were begun by a relative handful of dedicated local jazz and rock and roll musicians in the city’s centrally located West Park. By 1968 the concerts had become a regular part of community life in Ann Arbor when they were spearheaded by the MC5 and the help of Trans Lover Energies.

Controversy over the free concerts developed in 1968 when the city’s conservative forces banded together in an attempt to stop the program charging excessive “noise” and “obscenity.” The concerts were actually ruled illegal by the City Council, but the local government was later forced to approve them when overwhelming community support was demonstrated by a petition drive and the fact that people went ahead and held the concerts anyway. Members of the MC5 were actually arrested tor playing music on the basis of “noise” complaints during the prohibition.

The concerts were moved to an out of town site in 1969 and proceeded that year without major incident. In 1970 the Ann Arbor Community Parks Program, Inc. was founded as a Michigan non-profit corporation. It was a formal reflection of the broad, organized base of support which continued to develop for the concerts along with the overall expansion of our community.

The original funding for the park program came from informal contributions from the participants. Since then the scope of activities involved has grown to the point where more extensive funding is necessary to make them possible. The City of Ann Arbor, under the former liberal administration of Mayor Harris, began partially funding the program in 1970, with the remainder of the expense contributed by means of a bucket drive at the concerts. This year’s funding comes in part from a grant of $6,000 of the city’s federal revenue sharing money, passed by the Democratic/HRP coalition that controlled City Council until this past election.

Since it took power in April, the Republican majority on Council, led by Mayor James Stephenson, has already raised the possibility that the park program may once again run into difficulties with the city. Stephenson told the SUN his administration would no longer vote to help fund the program, and recently threatened to cancel the concerts if there was any “disruption” of the Republican’s attempts to repeal the local $5 marijuana law. Despite the threats the Republicans did give approval to the weekly tribal stomps through August 19 at their meeting last Monday night.

The following is edited from a report that Peter Andrews prepared for committee members of this year’s Parks Program. Peter in 1969 and 1970 was responsible for heading up the program, and since then has continued to fully participate. The reason for the report was to remind old participants and help inform new persons as to the past and present need for such a park program, and to brief everyone in a partial historical review.

The Park Program was and is designed to provide activity for a large segment of our community or for anyone who wished to attend these events. Many of our present problems in this society stem from the fact that the people do not have positive activities in which to participate.

As we have seen in three recent years of the Park Program, and the four or five previous years, which are just as important, our society has culturally deteriorated considerably during this period. The entire music business has gone on a capitalistic spiral, where in almost a joint manner, promoters, agencies, and record companies have all conspired, in many respects, in creating a bigger and bigger emphasis on sales appeal, not musicianship. This has all meant more dollars for fewer and fewer in the industry, and as a result, less and less jobs for a growing number of musicians.

Locally, the effect has been to disintegrate what was once the healthiest local music scene in the country. No longer do local bands draw what they used to. For instance, SRC and the Amboy Dukes could no longer draw fifteen thousand to the Park Program as they did two and a half, three years ago. Indeed, our culture has lost thousands of musicians who have had to seek other forms of work because there is just no money in the business to support them or their growth as future acknowledged musicians.

We, initially, are concerned with our own local area and in those regards have tried to give the atmosphere and tools for young musicians to mature and grow and to help resurrect and recreate this local scene. The People’s Ballroom was and is an important tool in this progression. But this certainly, from our standpoint, is only the very beginning.

“For instance, in the case of UAC-Daystar concerts, we constantly get students screaming for more and more rock and roll, but when it comes right down to it, there is less and less good rock and roll in the country as the years go by. That has been the case for the last three years and the reason for this has again been that there are fewer jobs available to musicians; it is harder to achieve success. Success many times simply meaning cash, in the music business.

As a result, there are exclusive deals with promoters which can prevent, as an example, the University of Michigan from even getting the talent that does exist. Furthermore, much of the talent that people desire is not of high numbers. No longer does a big draw mean a group is good. It may have something to do with musical quality, but in more and more cases it is just a business, promotional hype. So when we look at the program, we should see it as a basic key that we can use in our community to reverse this extremely negative trend.

We are trying to provide a stage for musicians so that they can be appreciated, the audience can learn what good musicians there are locally, and can support them throughout the summer, fall and winter months. It certainly follows that if we can raise the money, if we have the money, if we are able to have money appropriated to us, it is extremely valid that the musicians should be paid as much as we can afford.

A tremendous amount of what we are doing with this Park Program is trying to secure a future for our culture, for our musical culture. And certainly, musicians are not going to have any future on two cents a week.

We are trying to give those musicians that are most talented, locally, that are not in the big band scene a chance to expose their music as adequately and as effectively as possible. Just like in any program, you want to start with a basis a nucleus, strengthen our local scene, strengthen the appreciation for local musicians all the more.

The Psychedelic Rangers, organized by Trans-Love Energies in 1967 at a Love-In on Belle Isle in Detroit. In 1969 they became a permanent part of our Park Program and at that early time it was discussed and hoped that the Rangers by continuing to work on the program would be able to develop the skills and dedication necessary to gain their own autonomy, their own strength, and actually be a working unity that could serve organizations all year round. It was projected that the Rangers could go to the extent of actually getting themselves bonded so that they could serve as an alternate policing force for appropriate events.

It is important that we also pursue the area of public relations within the city on what we are doing in the form of press releases, pictures, articles that we get written and send around locally and nationally. It is more than just possible that by informing people in an intelligent way of what we are doing, nationally, appealing to government, appealing to youth organizations, we can create fifty to a hundred programs similar to this. The final result will have a positive effect, not only within our community but outside our community, towards achieving these extremely important goals.