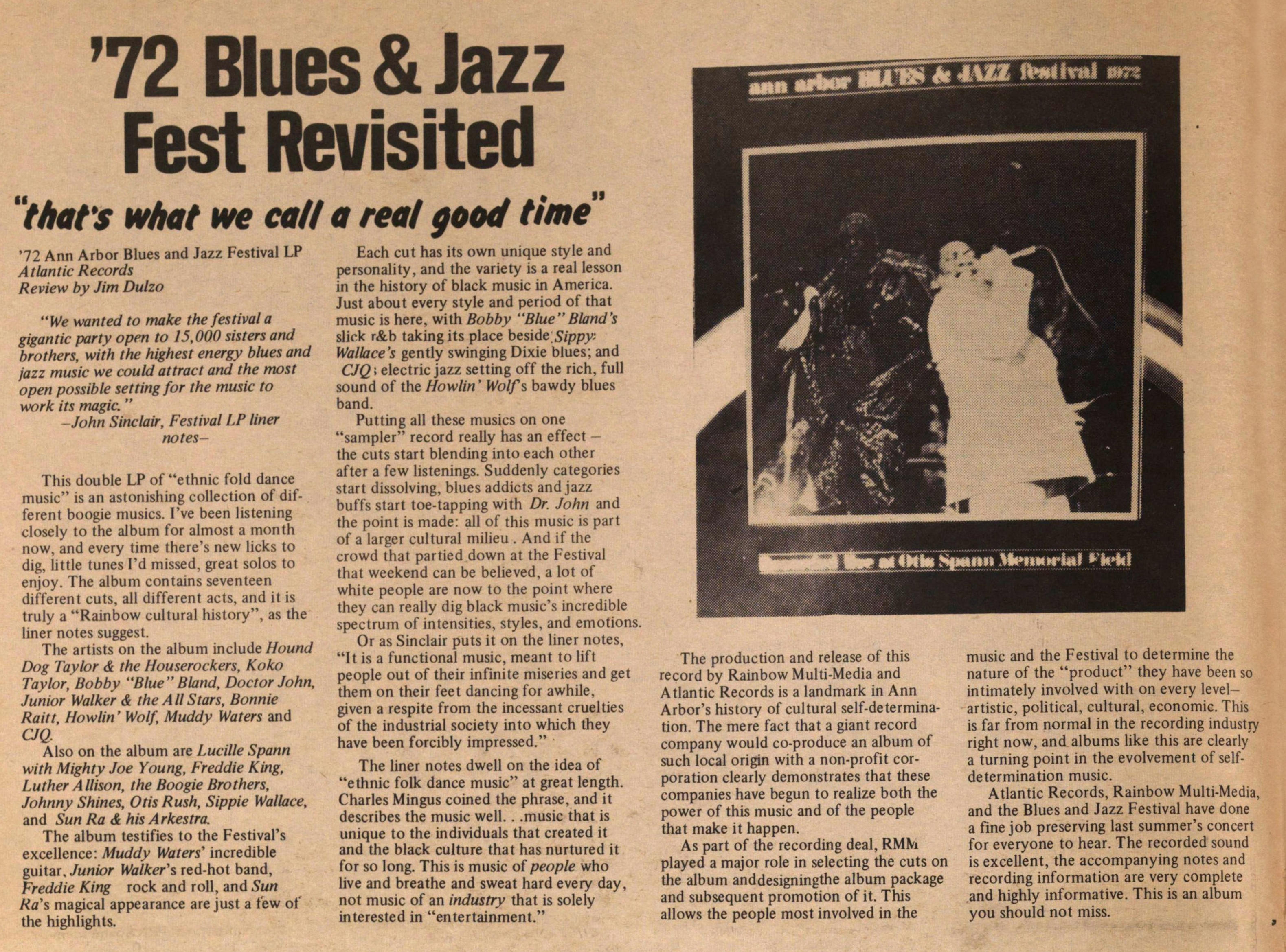 “that’s what we call a real good time”

“We wanted to make the festival a gigantic party open to 15,000 sisters and brothers, with the highest energy blues and jazz music we could attract and the most open possible setting for the music to work its magic.”
-John Sinclair, Festival LP liner notes-

This double LP of “ethnic fold dance music” is an astonishing collection of different boogie musics. I’ve been listening closely to the album for almost a month now, and every time there’s new licks to dig, little tunes I’d missed, great solos to enjoy. The album contains seventeen different cuts, all different acts, and it is truly a “Rainbow cultural history”, as the liner notes suggest.

Each cut has its own unique style and personality, and the variety is a real lesson in the history of black music in America. Just about every style and period of that music is here, with Bobby “Blue” Bland’s slick r&b taking its place beside Sippy Wallace’s gently swinging Dixie blues; and CJQ; electric jazz setting off the rich, full sound of the Howlin’ Wolfs bawdy blues band.

Putting all these musics on one “sampler” record really has an effect – the cuts start blending into each other after a few listenings. Suddenly categories start dissolving, blues addicts and jazz buffs start toe-tapping with Dr. John and the point is made: all of this music is part of a larger cultural milieu. And if the crowd that partied down at the Festival that weekend can be believed, a lot of white people are now to the point where they can really dig black music’s incredible spectrum of intensities, styles, and emotions.

Or as Sinclair puts it on the liner notes, “It is a functional music, meant to lift people out of their infinite miseries and get them on their feet dancing for awhile, given a respite from the incessant cruelties of the industrial society into which they have been forcibly impressed.”

The liner notes dwell on the idea of “ethnic folk dance music” at great length. Charles Mingus coined the phrase, and it describes the music well. . .music that is unique to the individuals that created it and the black culture that has nurtured it for so long. This is music of people who live and breathe and sweat hard every day, not music of an industry that is solely interested in “entertainment.”

The production and release of this record by Rainbow Multi-Media and Atlantic Records is a landmark in Ann Arbor’s history of cultural self-determination. The mere fact that a giant record company would co-produce an album of such local origin with a non-profit corporation clearly demonstrates that these companies have begun to realize both the power of this music and of the people that make it happen.

As part of the recording deal, RMM played a major role in selecting the cuts on the album and designing the album package and subsequent promotion of it. This allows the people most involved in the music and the Festival to determine the nature of the “product” they have been so intimately involved with on every level – artistic, political, cultural, economic. This is far from normal in the recording industry right now, and albums like this are clearly a turning point in the evolvement of self-determination music.

Atlantic Records, Rainbow Multi-Media, and the Blues and Jazz Festival have done a fine job preserving last summer’s concert for everyone to hear. The recorded sound is excellent, the accompanying notes and recording information are very complete and highly informative. This is an album you should not miss.