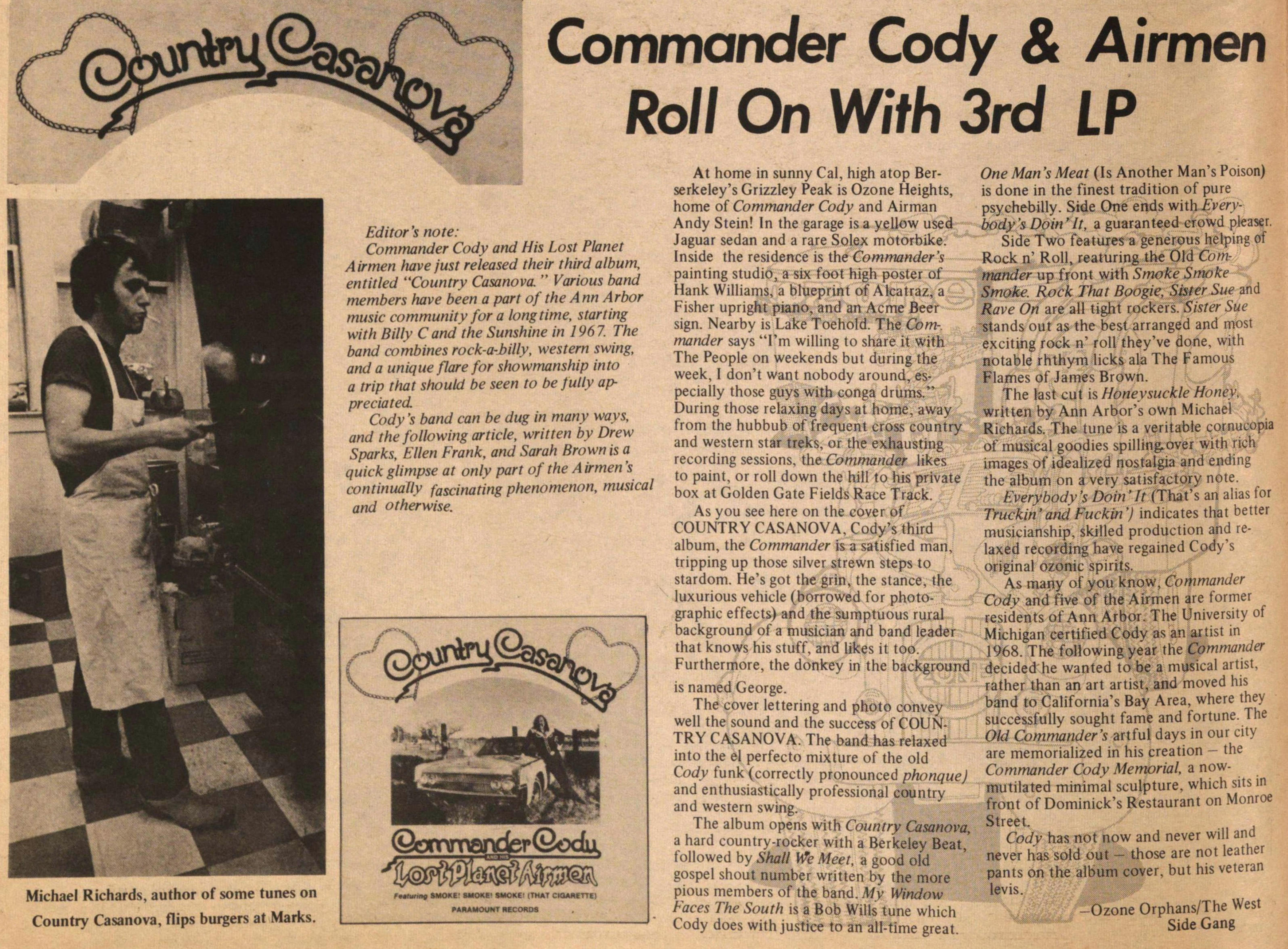 Editor ‘s note: Commander Cody and His Lost Planet Airmen have just released their third album, entitled “Country Casanova.” Various band members have been a part of the Ann Arbor music community for a long time, starting with Billy C and the Sunshine in 1967. The band combines rock-a-billy, western swing, and a unique flare for showmanship into a trip that should be seen to be fully appreciated.

Cody’s band can be dug in many ways, and the following article, written by Drew Sparks, Ellen Frank, and Sarah Brown is a quick glimpse at only part of the Airmen ‘s continually fascinating phenomenon, musical and otherwise.

At home in sunny Cal, high atop Berserkeley’s Grizzley Peak is Ozone Heights, home of Commander Cody and Airman Andy Stein! In the garage is a yellow used Jaguar sedan and a rare Solex motorbike. Inside the residence is the Commander’s painting studio, a six foot high poster of Hank Williams, a blueprint of Alcatraz, a Fisher upright piano, and an Acme Beer sign. Nearby is Lake Toehold. The Commander says “I’m willing to share it with The People on weekends but during the week, I don’t want nobody around, especially those guys with conga drums.” During those relaxing days at home, away from the hubbub of frequent cross country and western star treks, or the exhausting recording sessions, the Commander likes to paint, or roll down the hill to his private box at Golden Gate Fields Race Track.

As you see here on the cover of COUNTRY CASANOVA, Cody’s third album, the Commander is a satisfied man, tripping up those silver strewn steps to stardom. He’s got the grin, the stance, the luxurious vehicle (borrowed for photographic effects) and the sumptuous rural background of a musician and band leader that knows his stuff, and likes it too. Furthermore, the donkey in the background is named George.

The cover lettering and photo convey well the sound and the success of COUNTRY CASANOVA. The band has relaxed into the el perfecto mixture of the old Cody funk (correctly pronounced phonque) and enthusiastically professional country and western swing.

The album opens with Country Casanova, a hard country-rocker with a Berkeley Beat, followed by Shall We Meet, a good old gospel shout number written by the more pious members of the band. My Window Faces The South is a Bob Wills tune which Cody does with justice to an all-time great. One Man ‘s Meat (Is Another Man’s Poison) is done in the finest tradition of pure psychebilly. Side One ends with Everybody’s Doin’ It, a guaranteed crowd pleaser.

Side Two features a generous helping of Rock n’ Roll, featuring the Old Commander up front with Smoke Smoke Smoke. Rock Thai Boogie, Sister Sue and Rave On are all tight rockers. Sister Sue stands out as the best arranged and most exciting rock n’ roll they’ve done, with notable rhythm licks ala The Famous Flames of James Brown.

The last cut is Honeysuckle Honey, written by Ann Arbor’s own Michael Richards. The tune is a veritable cornucopia of musical goodies spilling over with rich images of idealized nostalgia and ending the album on a very satisfactory note.

As many of you know, Commander Cody and five of the Airmen are former residents of Ann Arbor. The University of Michigan certified Cody as an artist in 1968. The following year the Commander decided he wanted to be a musical artist, rather than an art artist, and moved his band to California’s Bay Area, where they successfully sought fame and fortune. The Old Commander’s artful days in our city are memorialized in his creation – the Commander Cody Memorial, a now-mutilated minimal sculpture, which sits m front of Dominick’s Restaurant on Monroe Street.

Cody has not now and never will and never has sold out – those are not leather pants on the album cover, but his veteran levis.