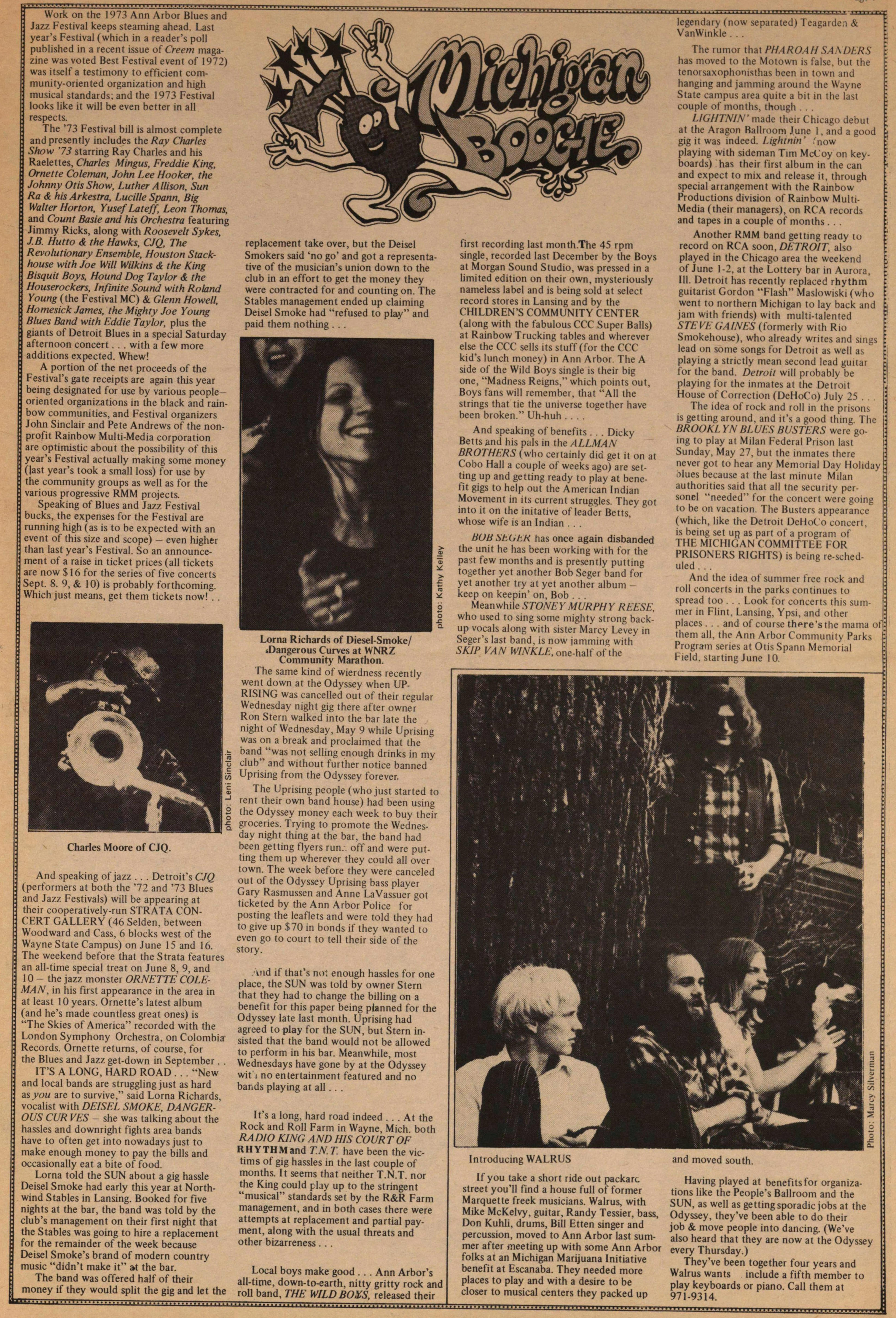 Work on the 1973 Ann Arbor Blues and Jazz Festival keeps steaming ahead. Last year’s Festival (which in a reader’s poll published in a recent issue of Creem magazine was voted Best Festival event of 1972) was itself a testimony to efficient community-oriented organization and high musical standards: and the 1973 Festival looks like it will be even better in all respects.

A portion of the net proceeds of the Festival’s gate receipts are again this year being designated for use by various people-oriented organizations in the black and rainbow communities, and Festival organizers John Sinclair and Pete Andrews of the nonprofit Rainbow Multi-Media corporation are optimistic about the possibility of this year’s Festival actually making some money (last year’s took a small loss) for use by the community groups as well as for the various progressive RMM projects.

Speaking of Blues and Jazz Festival bucks, the expenses for the Festival are running high (as is to be expected with an event of this size and scope) – even higher than last year’s Festival. So an announcement of a raise in ticket prices (all tickets are now $ 16 for the series of five concerts Sept. 8. 9, & 10) is probably forthcoming. Which just means, get them tickets now!

And speaking of jazz . . . Detroit’s CJQ (performers at both the ‘72 and ‘73 Blues and Jazz Festivals) will be appearing at their cooperatively-run STRATA CONCERT GALLERY (46 Selden, between Woodward and Cass, 6 blocks west of the Wayne State Campus) on June 15 and 16. The weekend before that the Strata features an all-time special treat on June 8, 9, and 10 – the jazz monster ORNETTE COLEMAN, in his first appearance in the area in at least 10 years. Ornette’s latest album (and he’s made countless great ones) is “The Skies of America” recorded with the London Symphony Orchestra, on Colombia Records. Ornette returns, of course, for the Blues and Jazz get-down in September . . .

IT’S A LONG, HARD ROAD . . . “New and local bands are struggling just as hard as you are to survive,” said Lorna Richards, vocalist with DEISEL SMOKE, DANGEROUS CURVES – she was talking about the hassles and downright fights area bands have to often get into nowadays just to make enough money to pay the bills and occasionally eat a bite of food.

Lorna told the SUN about a gig hassle Deisel Smoke had early this year at Northwind Stables in Lansing. Booked for five nights at the bar, the band was told by the club’s management on their first night that the Stables was going to hire a replacement for the remainder of the week because Deisel Smoke’s brand of modern country music “didn’t make it” at the bar.

The band was offered half of their money if they would split the gig and let the replacement take over, but the Deisel Smokers said ‘no go’ and got a representative of the musician’s union down to the club in an effort to get the money they were contracted for and counting on. The Stables management ended up claiming Deisel Smoke had “refused to play” and paid them nothing . . .

The same kind of weirdness recently went down at the Odyssey when UPRISING was cancelled out of their regular Wednesday night gig there after owner Ron Stern walked into the bar late the night of Wednesday, May 9 while Uprising was on a break and proclaimed that the band “was not selling enough drinks in my club” and without further notice banned Uprising from the Odyssey forever.

The Uprising people (who just started to rent their own band house) had been using the Odyssey money each week to buy their groceries. Trying to promote the Wednesday night thing at the bar, the band had been getting flyers run off and were putting them up wherever they could all over town. The week before they were canceled out of the Odyssey Uprising bass player Gary Rasmussen and Anne LaVassuer got ticketed by the Ann Arbor Police for posting the leaflets and were told they had to give up $70 in bonds if they wanted to even go to court to tell their side of the story.

And if that’s not enough hassles for one place, the SUN was told by owner Stern that they had to change the billing on a benefit for this paper being penned for the Odyssey late last month. Uprising had agreed to play for the SUN, but Stern insisted that the band would not be allowed to perform in his bar. Meanwhile, most Wednesdays have gone by at the Odyssey with no entertainment featured and no bands playing at all . . .

It’s a long, hard road indeed . . . At the Rock and Roll Farm in Wayne, Mich. both RADIO KING AND HIS COURT OF RHYTHM and T.N.T. have been the victims of gig hassles in the last couple of months. It seems that neither T.N.T. nor the King could play up to the stringent “musical” standards set by the R&R Farm management, and in both cases there were attempts at replacement and partial payment, along with the usual threats and other bizarreness . . .

Local boys make good . . . Ann Arbor’s all-time, down-to-earth, nitty gritty rock and roll band, THE WILD BOYS, released their first recording last month. The 45 rpm single, recorded last December by the Boys at Morgan Sound Studio, was pressed in a limited edition on their own, mysteriously nameless label and is being sold at select record stores in Lansing and by the CHILDREN’S COMMUNITY CENTER (along with the fabulous CCC Super Balls) at Rainbow Trucking tables and wherever else the CCC sells its stuff (for the CCC kid’s lunch money) in Ann Arbor. The A side of the Wild Boys single is their big one, “Madness Reigns,” which points out, Boys fans will remember, that “All the strings that tie the universe together have been broken.” Uh-huh . . . .

And speaking of benefits . . . Dicky Betts and his pals in the ALLMAN BROTHERS (who certainly did get it on at Cobo Hall a couple of weeks ago) are setting up and getting ready to play at benefit gigs to help out the American Indian Movement in its current struggles. They got into it on the initiative of leader Betts, whose wife is an Indian . . .

BOB SEGER has once again disbanded the unit he has been working with for the past few months and is presently putting together yet another Bob Seger band for yet another try at yet another album – keep on keepin’ on, Bob . . .

The rumor that PHAROAH SANDERS has moved to the Motown is false, but the tenorsaxophonist has been in town and hanging and jamming around the Wayne State campus area quite a bit in the last couple of months, though . . .

LIGHTNIN’ made their Chicago debut at the Aragon Ballroom June 1, and a good gig it was indeed. Lightnin’ (now playing with sideman Tim McCoy on keyboards) has their first album in the can and expect to mix and release it, through special arrangement with the Rainbow Productions division of Rainbow Multi-Media (their managers), on RCA records and tapes in a couple of months . . .

Another RMM band getting ready to record on RCA soon, DETROIT, also played in the Chicago area the weekend of June 1-2, at the Lottery bar in Aurora, Ill. Detroit has recently replaced rhythm guitarist Gordon “Flash” Maslowiski (who went to northern Michigan to lay back and jam with friends) with multi-talented STEVE GAINES (formerly with Rio Smokehouse), who already writes and sings toad on some songs for Detroit as well as playing a strictly mean second lead guitar for the band. Detroit will probably be playing for the inmates at the Detroit House of Correction (DeHoCo) July 25 . . .

The idea of rock and roll in the prisons is getting around, and it’s a good thing. The BROOKLYN BLUES BUSTERS were going to play at Milan Federal Prison last Sunday, May 27, but the inmates there never got to hear any Memorial Day Holiday blues because at the last minute Milan authorities said that all the security personnel “needed” for the concert were going to be on vacation. The Busters appearance (which, like the Detroit DeHoCo concert, is being set up as part of a program of THE MICHIGAN COMMITTEE FOR PRISONERS RIGHTS) is being re-scheduled . . .

And the idea of summer free rock and roll concerts in the parks continues to spread too . . . Look for concerts this summer in Flint, Lansing, Ypsi, and other places . . . and of course there’s the mama of them all, the Ann Arbor Community Parks Program series at Otis Spann Memorial Field, starting June 10.

If you take a short ride out Packard street you’ll find a house full of former Marquette freek musicians. Walrus, with Mike McKelvy, guitar, Randy Tessier, bass, Don Kuhli, drums, Bill Etten singer and percussion, moved to Ann Arbor last summer after meeting up with some Ann Arbor folks at an Michigan Marijuana Initiative benefit at Escanaba. They needed more places to play and with a desire to be closer to musical centers they packed up and moved south.

Having played at benefits for organizations like the People’s Ballroom and the SUN, as well as getting sporadic jobs at the Odyssey, they’ve been able to do their job & move people into dancing. (We’ve also heard that they are now at the Odyssey every Thursday.)

They’ve been together four years and Walrus wants to include a fifth member to play keyboards or piano. Call them at 971-9314.