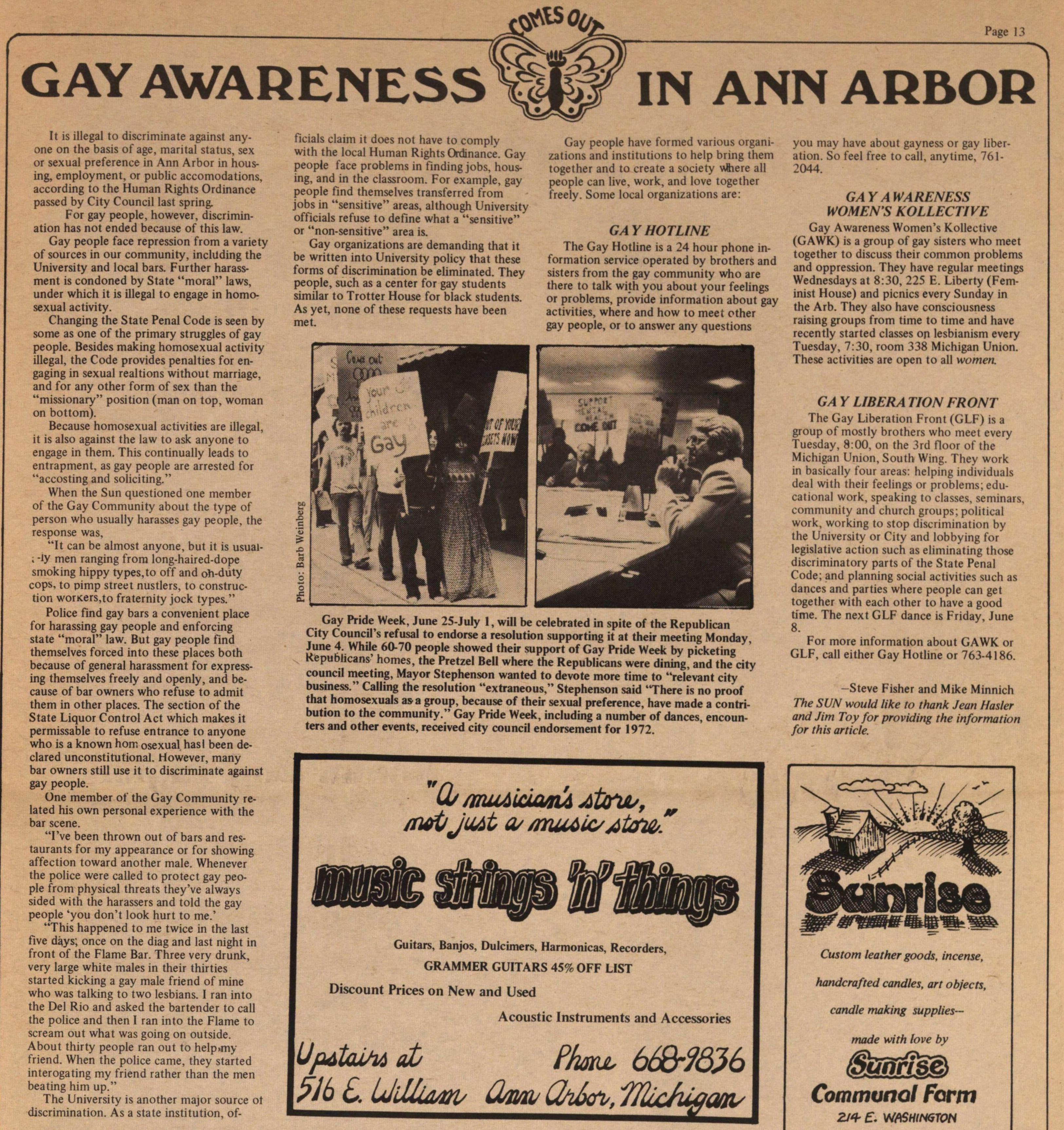 It is illegal to discriminate against anyone on the basis of age, marital status, sex or sexual preference in Ann Arbor in housing, employment, or public accommodations, according to the Human Rights Ordinance passed by City Council last spring.

For gay people, however, discrimination has not ended because of this law.

Gay people face repression from a variety of sources in our community, including the University and local bars. Further harassment is condoned by State "moral" laws, under which it is illegal to engage in homosexual activity.

Changing the State Penal Code is seen by some as one of the primary struggles of gay people. Besides making homosexual activity illegal, the Code provides penalties for engaging in sexual relations without marriage, and for any other form of sex than the "missionary" position (man on top, woman on bottom).

Because homosexual activities are illegal, it is also against the law to ask anyone to engage in them. This continually leads to entrapment, as gay people are arrested for "accosting and soliciting."

When the Sun questioned one member of the Gay Community about the type of person who usually harasses gay people, the response was:

"It can be almost anyone, but it is usually men ranging from long-haired-dope smoking hippy types, to off and on-duty cops, to pimp street hustlers, to construction workers,to fraternity jock types."

Police find gay bars a convenient place for harassing gay people and enforcing state "moral" law. But gay people find themselves forced into these places both because of general harassment for expressing themselves freely and openly, and because of bar owners who refuse to admit them in other places. The section of the State Liquor Control Act which makes it permissible to refuse entrance to anyone who is a known homosexual has been declared unconstitutional. However, many bar owners still use it to discriminate against gay people.

One member of the Gay Community related his own personal experience with the bar scene.

"I've been thrown out of bars and restaurants for my appearance or for showing affection toward another male. Whenever the police were called to protect gay people from physical threats they've always sided with the harassers and told the gay people 'you don't look hurt to me.'

"This happened to me twice in the last five days; once on the diag and last night in front of the Flame Bar. Three very drunk, very large white males in their thirties started kicking a gay male friend of mine who was talking to two lesbians. I ran into the Del Rio and asked the bartender to call the police and then I ran into the Flame to scream out what was going on outside. About thirty people ran out to help my friend. When the police came, they started interrogating my friend rather than the men beating him up."

The University is another major source of discrimination. As a state institution, officials claim it does not have to comply with the local Human Rights Ordinance. Gay people face problems in finding jobs, housing, and in the classroom. For example, gay people find themselves transferred from jobs in "sensitive" areas, although University officials refuse to define what a "sensitive" or "non-sensitive" area is.

Gay organizations are demanding that it be written into University policy that these forms of discrimination be eliminated. They people, such as a center for gay students similar to Trotter House for black students. As yet, none of these requests have been met.

Gay people have formed various organizations and institutions to help bring them together and to create a society where all people can live, work, and love together freely. Some local organizations are:

The Gay Hotline is a 24 hour phone information service operated by brothers and sisters from the gay community who are there to talk with you about your feelings or problems, provide information about gay activities, where and how to meet other gay people, or to answer any questions you may have about gayness or gay liberation. So feel free to call anytime, 761-2044.

Gay Awareness Women's Kollective (GAWK) is a group of gay sisters who meet together to discuss their common problems and oppression. They have regular meetings Wednesdays at 8:30, 225 E. Liberty (Feminist House) and picnics every Sunday in the Arb. They also have consciousness raising groups from time to time and have recently started classes on lesbianism every Tuesday, 7:30, room 338 Michigan Union. These activities are open to all women

The Gay Liberation Front (GLF) is a group of mostly brothers who meet every Tuesday, 8:00, on the 3rd floor of the Michigan Union, South Wing. They work in basically four areas: helping individuals deal with their feelings or problems; educational work, speaking to classes, seminars, community and church groups; political work, working to stop discrimination by the University or City and lobbying for legislative action such as eliminating those discriminatory parts of the State Penal Code; and planning social activities such as dances and parties where people can get together with each other to have a good time. The next GLF dance is Friday, June 8.

For more information about GAWK or GLF, call either Gay Hotline or 763-4186.

The SUN would like to thank Jean Hasler and Jim Toy for providing the information for this article.

Gay Pride Week, June 25-July 1, will be celebrated in spite of the Republican City Council's refusal to endorse a resolution supporting it at their meeting Monday June 4. While 60-70 people showed their support of Gay Pride Week by picketing Republicans' homes, the Pretzel Bell where the Republicans were dining, and the city council meeting, Mayor Stephenson wanted to devote more time to "relevant city business." Calling the resolution "extraneous," Stephenson said "There is no proof that homosexuals as a group, because of their sexual preference. have made a contribution to the community." Gay Pride Week, including a number of dances, encounters and other events, received city council endorsement for 1972.