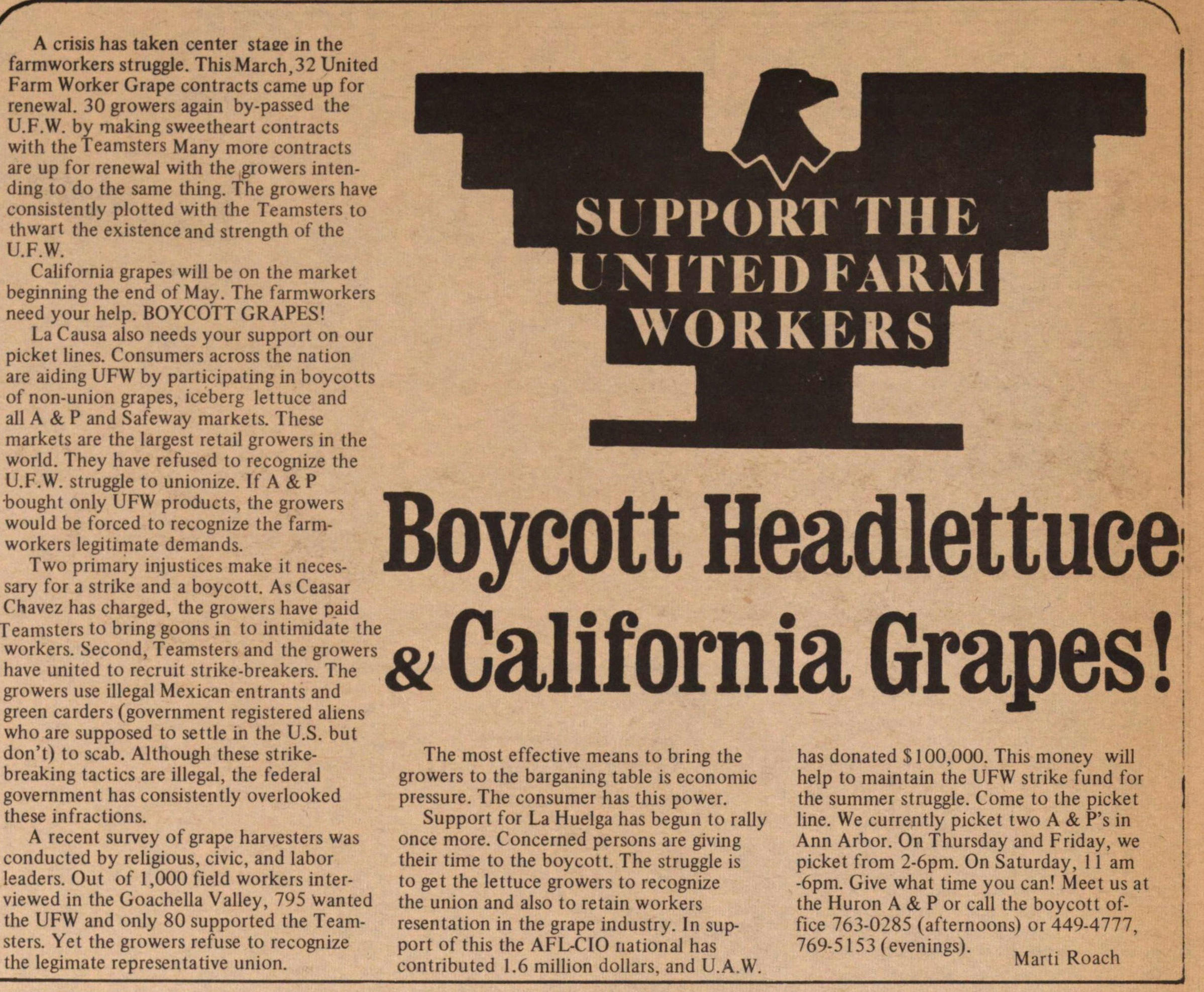 California grapes will be on the market beginning the end of May. The farmworkers need your help. BOYCOTT GRAPES!

La Causa also needs your support on our picket lines. Consumers across the nation are aiding UFW by participating in boycotts of non-union grapes, iceberg lettuce and all A & P and Safeway markets. These markets are the largest retail growers in the world. They have refused to recognize the U.F.W. struggle to unionize. If A & P bought only UFW products, the growers would be forced to recognize the farmworkers legitímate demands.

Two primary injustices make it necessary for a strike and a boycott. As Ceasar Chavez has charged, the growers have paid Teamsters to bring goons in to intimídate the workers. Second, Teamsters and the growers have united to recruit strike-breakers. The growers use illegal Mexican entrants and green carders (government registered aliens who are supposed to settle in the U.S. but don't) to scab. Although these strikebreaking tactics are illegal, the federal government has consistently overlooked these infractions.

A recent survey of grape harvesters was conducted by religious, civic, and labor leaders. Out of 1,000 field workers interviewed in the Goachella Valley, 795 wanted the UFW and only 80 supported the Teamsters. Yet the growers refuse to recognize the legimate representative union.

The most effective means to bring the growers to the barganing table is economie pressure. The consumer has this power.

Support for La Huelga has begun to rally once more. Concerned persons are giving their time to the boycott. The struggle is to get the lettuce growers to recognize the union and also to retain workers resentation in the grape industry. In support of this the AFL-CIO national has contributed 1.6 million dollars, and U.A.W. has donated $1 00,000. This money will help to maintain the UFW strike fund for the summer struggle.
Come to the picket line. We currently picket two A & P's in Ann Arbor. On Thursday and Friday, we picket from 2-6pm. On Saturday, 1 1 am -6pm. Give what time you can! Meet us at the Huron A & P or cali the boycott office 763-0285 (afternoons) or 449-4777, 769-51 53 (evenings).