Lice In America Who's Bugging You? 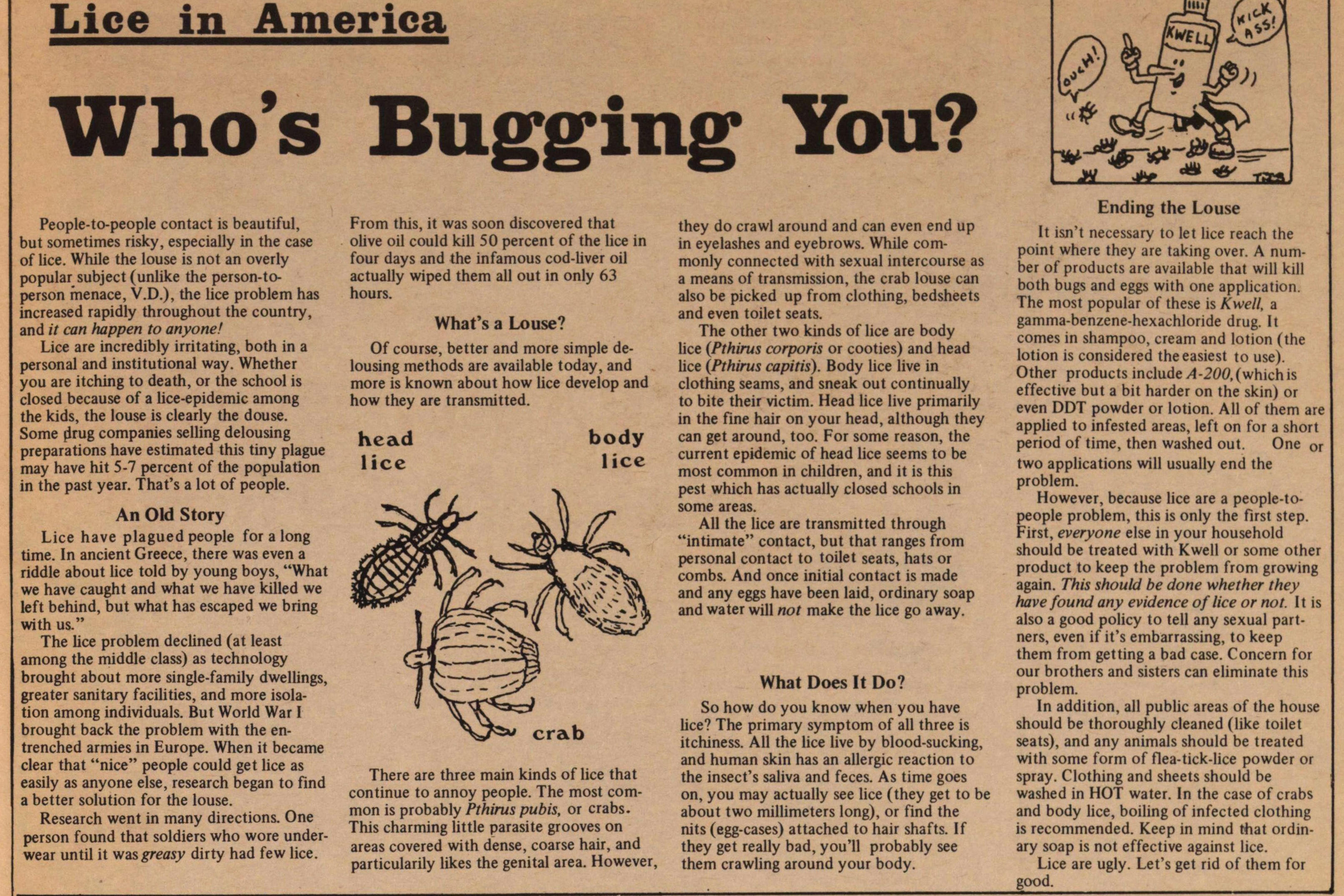 People-to-people contact is beautiful, but sometimes risky, especially in the case of lice. While the louse is not an overly popular subject (unlike the person-to-person menace, V.D.), the lice problem has increased rapidly throughout the country, and it can happen to anyone!

Lice are incredibly irritating, both in a personal and institutional way. Whether you are itching to death, or the school is closed because of a lice-epidemic among the kids, the louse is clearly the douse. Some drug companies selling delousing preparations have estimated this tiny plague may have hit 5-7 percent of the population in the past year. That's a lot of people.

Lice have plagued people for a long time. In ancient Greece, there was even a riddle about lice told by young boys, "What we have caught and what we have killed we left behind, but what has escaped we bring with us."

The lice problem declined (at least among the middle class) as technology brought about more single-family dwellings, greater sanitary facilities, and more isolation among individuals. But World War I brought back the problem with the entrenched armies in Europe. When it became clear that "nice" people could get lice as easily as anyone else, research began to find a better solution for the louse.

Research went in many directions. One person found that soldiers who wore underwear until it was greasy dirty had few lice. From this, it was soon discovered that olive oil could kill 50 percent of the lice in four days and the infamous cod-liver oil actually wiped them all out in only 63 hours.

Of course, better and more simple delousing methods are available today, and more is known about how lice develop and how they are transmitted.

There are three main kinds of lice that continue to annoy people. The most common is probably Pthirus pubis, or crabs. This charming little parasite grooves on areas covered with dense, coarse hair, and particularily likes the genital area. However, they do crawl around and can even end up in eyelashes and eyebrows. While commonly connected with sexual intercourse as a means of transmission, the crab louse can also be picked up from clothing, bedsheets and even toilet seats.

The other two kinds of lice are body lice (Pthirus corporis or cooties) and head lice (Pthirus capitis). Body lice live in clothing seams, and sneak out continually to bite their victim. Head lice live primarily in the fine hair on your head, although they can get around, too. For some reason, the current epidemie of head lice seems to be most common in children, and it is this pest which has actually closed schools in some areas.

All the lice are transmitted through "intimate" contact, but that ranges from personal contact to toilet seats, hats or combs. And once initial contact is made and any eggs have been laid, ordinary soap and water will not make the lice go away.

What Does It Do?

So how do you know when you have lice? The primary symptom of all three is itchiness. All the lice live by blood-sucking, and human skin has an allergic reaction to the insect's saliva and feces. As time goes on, you may actually see lice (they get to be about two millimeters long), or find the nits (egg-cases) attached to hair shafts. If they get really bad, you'll probably see them crawling around your body.

It isn't necessary to let lice reach the point where they are taking over. A number of products are available that will kill both bugs and eggs with one application. The most popular of these is Kwell, a gamma-benzene-hexachloride drug. It comes in shampoo, cream and lotion (the lotion is considered the easiest to use). Other products include A-200, ( which is effective but a bit harder on the skin) or even DDT powder or lotion. All of them are applied to infested areas, left on for a short period of time, then washed out. One Or two applications will usually end the problem.

However, because lice are a people-to-people problem, this is only the first step. First, everyone else in your household should be treated with Kwell or some other product to keep the problem from growing again. This should be done whether they have found any evidence of lice or not. It is also a good policy to tell any sexual partners, even if it's embarrassing, to keep them from getting a bad case. Concern for our brothers and sisters can elimínate this problem.

In addition, all public areas of the house should be thoroughly cleaned (like toilet seats), and any animáis should be treated with some form of flea-tick-lice powder or spray. Clothing and sheets should be washed in HOT water. In the case of crabs and body lice, boiling of infected clothing is recommended. Keep in mind that ordinary soap is not effective against lice.

Lice are ugly. Let's get rid of them for good.