R.p.p. Attacked By State In Conspiracy 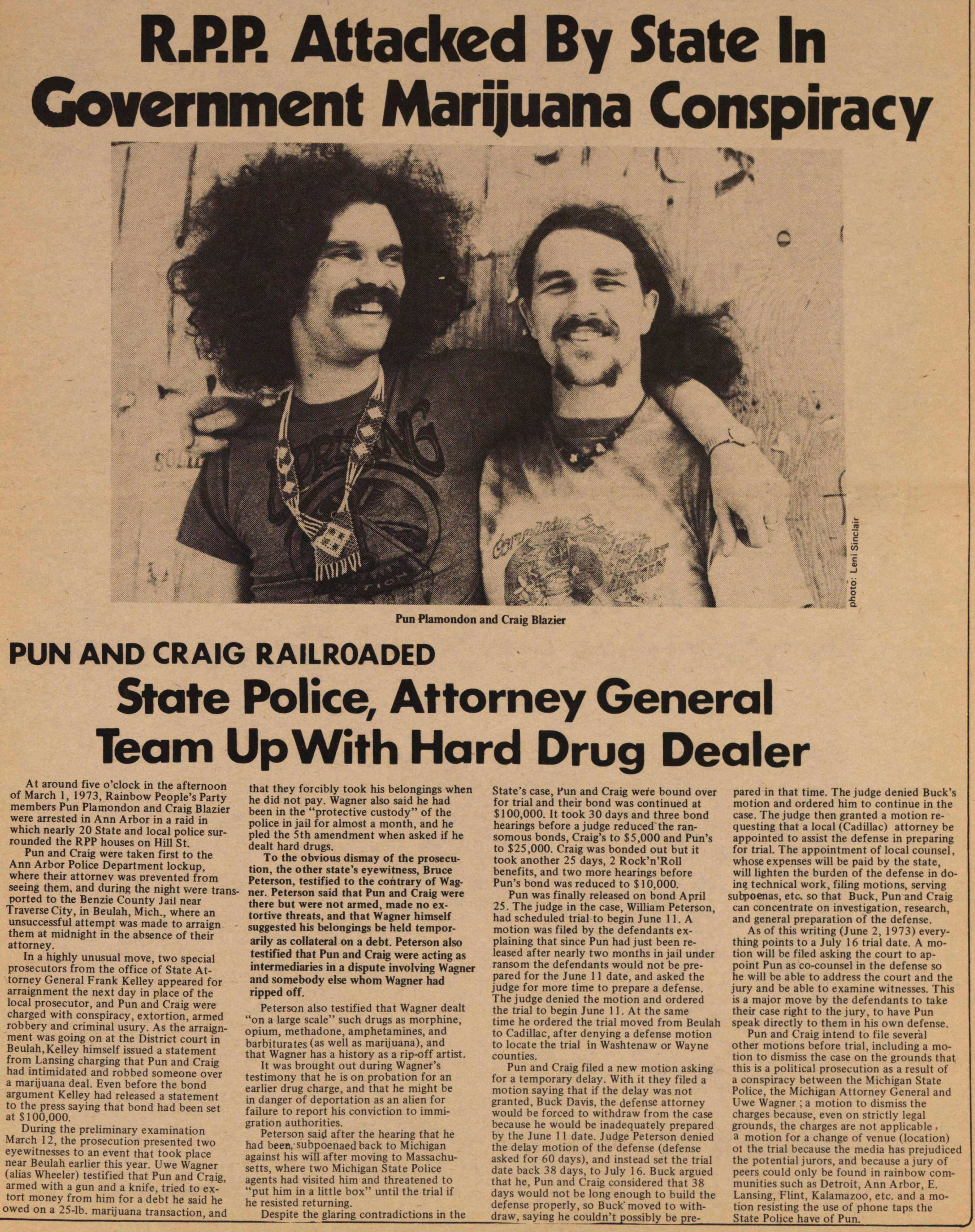 At around five o'clock in the afternoon of March 1, 1973, Rainbow People's Party members Pun Plamondon and Craig Blazier were arrested in Ann Arbor in a raid in which nearly 20 State and local police surrounded the RPP houses on Hill St. Pun and Craig were taken first to the Ann Arbor Police Department lockup, where their attorney was prevented from seeing them, and during the night were transported to the Benzie County Jail near Traverse City, in Beulah, Mich., where an unsuccessful attempt was made to arraign them at midnight in the absence of their attorney.

In a highly unusual move, two special prosecutors from the office of State Attorney General Frank Kelley appeared for arraignment the next day in place of the local prosecutor, and Pun and Craig were charged with conspiracy, extortion, armed robbery and criminal usury. As the arraignment was going on at the District court in Beulah, Kelley himself issued a statement from Lansing charging that Pun and Craig had intimidated and robbed someone over a marijuana deal. Even before the bond argument Kelley had released a statement to the press saying that bond had been set at $ 100,000.

During the preliminary examination March 12, the prosecution presented two eyewitnesses to an event that took place near Beulah earlier this year. Uwe Wagner (alias Wheeler) testified that Pun and Craig, armed with a gun and a knife, tried to extort money from him for a debt he said he owed on a 25-lb. marijuana transaction, and that they forcibly took his belongings when he did not pay. Wagner also said he had been in the "protective custody" of the police in jail for almost a month, and he pled the 5th amendment when asked if he dealt hard drugs.

To the obvious dismay of the prosecution, the other state's eyewitness, Bruce Peterson, testified to the contrary of Wagner. Peterson said that Pun and Craig were there but were not armed, made no extortive threats, and that Wagner himself suggested his belongings be held temporarily as collateral on a debt. Peterson also testified that Pun and Craig were acting as intermediaries in a dispute involving Wagner and somebody else whom Wagner had ripped off.

Peterson also testified that Wagner dealt "on a large scale" such drugs as morphine, opium, methadone, amphetamines, and barbiturates (as well as marijuana), and that Wagner has a history as a rip-off artist. It was brought out during Wagner's testimony that he is on probation for an earlier drug charge, and that he might be in danger of deportation as an alien for failure to report his conviction to immigration authorities.

Peterson said after the hearing that he had been, subpoenaed back to Michigan against his will after moving to Massachusetts, where two Michigan State Police agents had visited him and threatened to "put him in a little box" until the trial if he resisted returning. Despite the glaring contradictions in the State's case, Pun and Craig were bound over for trial and their bond was continued at $100,000. It took 30 days and three bond hearings before a judge reduced the ransomous bonds, Craig's to $5,000 and Pun's to $25,000. Craig was bonded out but it took another 25 days, 2 Rock'n'Roll benefits, and two more hearings before Pun's bond was reduced to $ 10,000.

Pun was finally released on bond April 25. The judge in the case, William Peterson, had scheduled trial to begin June 11. A motion was filed by the defendants explaining that since Pun had just been released after nearly two months in jail under ransom the defendants would not be prepared for the June 11 date, and asked the judge for more time to prepare a defense. The judge denied the motion and ordered the trial to begin June 11. At the same time he ordered the trial moved from Beulah to Cadillac, after denying a defense motion to locate the trial in Washtenaw or Wayne counties.

Pun and Craig filed a new motion asking for a temporary delay. With it they filed a motion saying that if the delay was not granted, Buck Davis, the defense attorney would be forced to withdraw from the case because he would be inadequately prepared by the June 11 date. Judge Peterson denied the delay motion of the defense (defense asked for 60 days), and instead set the trial date back 38 days, to July 16. Buck argued that he, Pun and Craig considered that 38 days would not be long enough to build the defense properly, so Buck moved to withdraw, saying he couldn't possibly be prepared in that time. The judge denied Buck's motion and ordered him to continue in the case. The judge then granted a motion requesting that a local (Cadillac) attorney be appointed to assist the defense in preparing for trial. The appointment of local counsel, whose expenses will be paid by the state, will lighten the burden of the defense in doing technical work, filing motions, serving subpoenas, etc. so that Buck, Pun and Craig can concentrate on investigation, research, and general preparation of the defense.

As of this writing (June 2, 1973) everything points to a July 16 trial date. A motion will be filed asking the court to appoint Pun as co-counsel in the defense so he will be able to address the court and the jury and be able to examine witnesses. This is a major move by the defendants to take their case right to the jury, to have Pun speak directly to them in his own defense. Pun and Craig intend to file several other motions before trial, including a motion to dismiss the case on the grounds that this is a political prosecution as a result of a conspiracy between the Michigan State Police, the Michigan Attorney General and Uwe Wagner; a motion to dismiss the charges because, even on strictly legal grounds, the charges are not applicable, a motion for a change of venue (location) of the trial because the media has prejudiced the potential jurors, and because a jury of peers could only be found in rainbow communities such as Detroit, Ann Arbor, E. Lansing, Flint, Kalamazoo, etc. and a motion resisting the use of phone taps the State Police have of Pun.