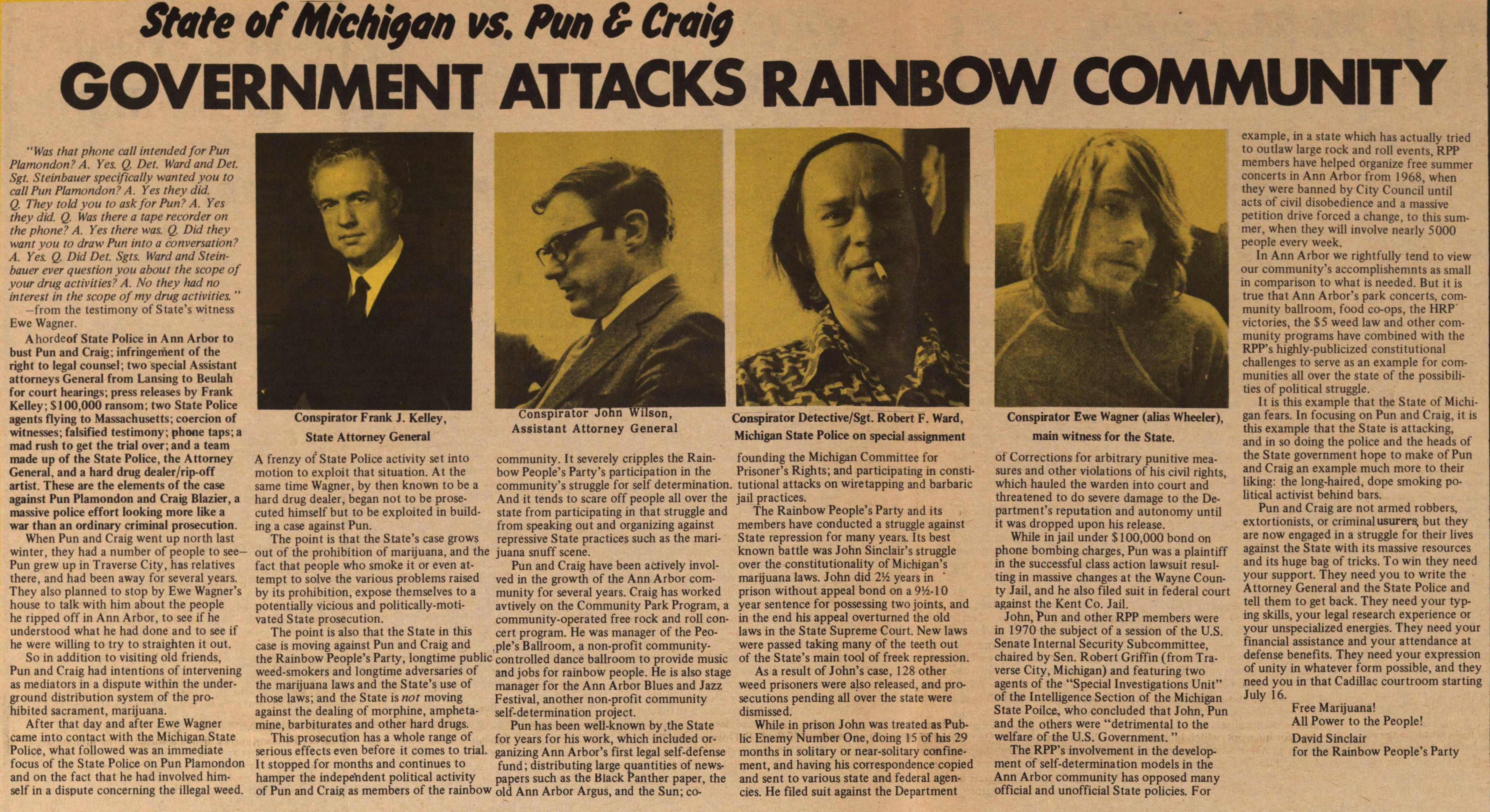 State of Michigan vs. Pun & Craig

"Was that phone call intended for Pun Plamondon? A. Yes. Q. Det. Ward and Det. Sgt. Steinbauer specifically wanted you to call Pun Plamondon? A. Yes they did. Q. They told you to ask for Pun? A. Yes they did. Q. Was there a tape recorder on the phone? A. Yes there was. Q. Did they want you to draw Pun into a conversation? A. Yes. Q. Did Det. Sgts. Ward and Steinbauer ever question you about the scope of your drug activities? A. No they had no interest in the scope of my drug activities." -from the testimony of State's witness Ewe Wagner.

A horde of State Police in Ann Arbor to bust Pun and Craig; infringement of the right to legal counsel; two special Assistant attorneys General from Lansing to Beulah for court hearings; press releases by Frank Kelley; $100,000 ransom; two State Police agents flying to Massachusetts; coercion of witnesses; falsified testimony; phone taps; a mad rush to get the trial over; and a team made up of the State Police, the Attorney General, and a hard drug dealer/rip-off artist. These are the elements of the case against Pun Plamondon and Craig Blazier, a massive police effort looking more like a war than an ordinary criminal prosecution.

When Pun and Craig went up north last winter, they had a number of people to see--Pun grew up in Traverse City, has relatives there, and had been away for several years. They also planned to stop by Ewe Wagner's house to talk with him about the people he ripped off in Ann Arbor, to see if he understood what he had done and to see if he were willing to try to straighten it out.

So in addition to visiting old friends, Pun and Craig had intentions of intervening as mediators in a dispute within the underground distribution system of the prohibited sacrament, marijuana.

After that day and after Ewe Wagner carne into contact with the Michigan State Police, what followed was an immediate focus of the State Police on Pun Plamondon and on the fact that he had involved himself in a dispute concerning the illegal weed. A frenzy of State Police activity set into motion to exploit that situation. At the same time Wagner, by then known to be a hard drug dealer, began not to be prosecuted himself but to be exploited in building a case against Pun.

The point is that the State's case grows out of the prohibition of marijuana, and the fact that people who smoke it or even attempt to solve the various problems raised by its prohibition, expose themselves to a potentially vicious and politically-motivated State prosecution.

The point is also that the State in this case is moving against Pun and Craig and the Rainbow People's Party, longtime public weed-smokers and longtime adversaries of the marijuana laws and the State's use of those laws; and the State is not moving against the dealing of morphine, amphetamine, barbiturates and other hard drugs.

This prosecution has a whole range of serious effects even before it comes to trial. It stopped for months and continues to hamper the independent political activity of Pun and Craig as members of the rainbow community. It severely cripples the Rainbow People's Party's participation in the community's struggle for self determination. And it tends to scare off people all over the state from participating in that struggle and from speaking out and organizing against repressive State practices such as the marijuana snuff scene.

Pun and Craig have been actively involved in the growth of the Ann Arbor community for several years. Craig has worked actively on the Community Park Program, a community-operated free rock and roll concert program. He was manager of the People's Ballroom, a non-profit community-controlled dance ballroom to provide music and jobs for rainbow people. He is also stage manager for the Ann Arbor Blues and Jazz Festival, another non-profit community self-determination project.

Pun has been well-known by the State for years for his work, which included organizing Ann Arbor's first legal self-defense fund; distributing large quantities of newspapers such as the Black Panther paper, the old Ann Arbor Argus, and the Sun; co-founding the Michigan Committee for Prisoner's Rights; and participating in constitutional attacks on wiretapping and barbaric jail practices.

The Rainbow People's Party and its members have conducted a struggle against State repression for many years. lt's best known battle was John Sinclair's struggle over the constitutionality of Michigan's marijuana laws. John did 2 1/2 years in prison without appeal bond on a 9 1/2-10 year sentence for possessing two joints, and in the end his appeal overturned the old laws in the State Supreme Court. New laws were passed taking many of the teeth out of the State's main tool of freek repression.

As a result of John's case, 128 other weed prisoners were also released, and prosecutions pending all over the state were dismissed.

While in prison John was treated as Public Enemy Number One, doing 15 of his 29 months in solitary or near-solitary confinement, and having his correspondence copied and sent to various state and federal agencies. He filed suit against the Department of Corrections for arbitrary punitive measures and other violations of his civil rights, which hauled the warden into court and threatened to do severe damage to the Department's reputation and autonomy until it was dropped upon his release.

While in jail under $100,000 bond on phone bombing charges, Pun was a plaintiff in the successful class action lawsuit resulting in massive changes at the Wayne County Jail, and he also filed suit in federal court against the Kent Co. Jail.

John, Pun and other RPP members were in 1970 the subject of a session of the U.S. Senate Internal Security Subcommittee, chaired by Sen. Robert Griffin (from Traverse City, Michigan) and featuring two agents of the "Special Investigations Unit" of the Intelligence Section of the Michigan State Police, who concluded that John, Pun and the others were "detrimental to the welfare of the U.S. Government."

The RPP's involvement in the development of self-determination models in the Ann Arbor community has opposed many official and unofficial State policies. For example, in a state which has actually tried to outlaw large rock and roll events, RPP members have helped organize free summer concerts in Ann Arbor from 1968, when they were banned by City Council until acts of civil disobedience and a massive petition drive forced a change, to this summer, when they will involve nearly 5000 people every week.

In Ann Arbor we rightfully tend to view our community's accomplishments as small in comparison to what is needed. But it is true that Ann Arbor's park concerts, community ballroom, food co-ops, the HRP victories, the $5 weed law and other community programs have combined with the RPP's highly-publicized constitutional challenges to serve as an example for communities all over the state of the possibilities of political struggle.

Pun and Craig are not armed robbers, extortionists, or criminal usurers but they are now engaged in a struggle for their lives against the State with its massive resources and its huge bag of tricks. To win they need your support. They need you to write the Attorney General and the State Police and tell them to get back. They need your typing skills, your legal research experience or your unspecialized energies. They need your financial assistance and your attendance at defense benefits. They need your expression of unity in whatever form possible, and they need you in that Cadillac courtroom starting July 16.