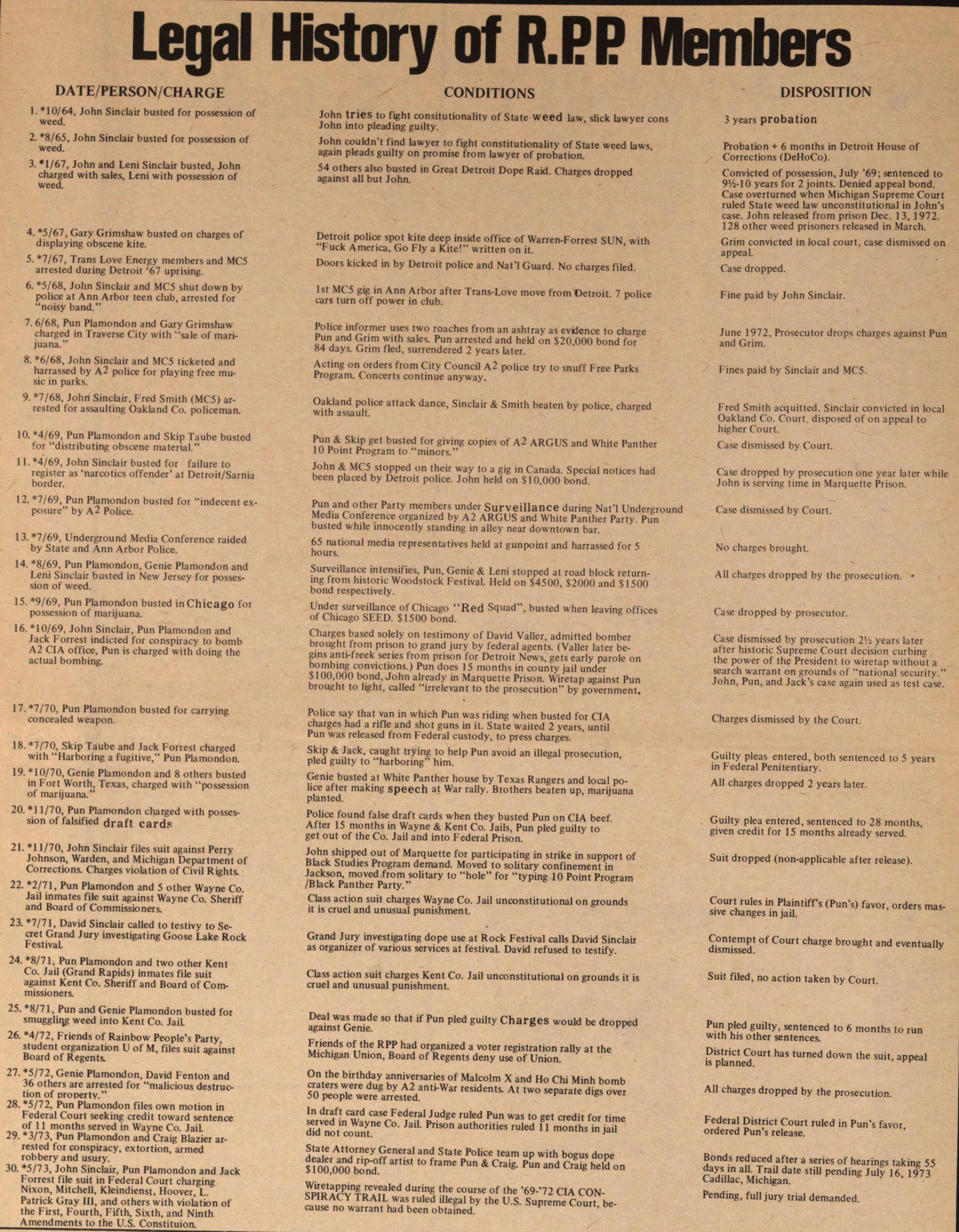 7. *6/68, Pun Plamondon and Gary Grimshaw charged in Traverse City with "sale of marijuana."

8. *6/68, John Sinclair and MC'5 ticketed and harassed by 2 police for playing free music in parks.

11, *4/69, John Sinclair busted for failure to register as 'narcotics offender' at Detroit/Sarnia border.

15. *9/69, Pun Plamondon busted in Chicago for possession of marijuana.

16. *10/69. John Sinclair, Pun Plamondon and Jack Forrest indicted for conspiracy to bomb A2 CIA office, Pun is charged with doing the actual bombing.

19. *10/70, Genie Plamondon and 8 others busted in Fort Worth, Texas, charged with "possession of marijuana."

22. *2/71, Pun Plamondon and 5 other Wayne Co Jail inmates file suit against Wayne Co. Sheriff and Board of Commissioners.

26. *4/72, Friends of Rainbow People's Party student organization U of M, files suit against Board of Regents.

27. *5/72, Genie Plamondon, David Fenton and 36 others are arrested for "malicious destruction of property."

54 others also busted in Great Detroit Dope Raid. Charges dropped against all but John.

Detroit police spot kite deep inside office of Warren-Forrest SUN with Fuck America, Go Fly a Kite!" written on it. Doors kicked in by Detroit police and Nat'l Guard. No charges filed.

Police informer uses two roaches from an ashtray as evidence to charge Pun and Grim with sales. Pun arrested and held on $20,000 bond for 84 days. Grim fled, surrendered 2 years later.

Pun & Skip get busted for giving copies of A2 ARGUS and White Panther 10 Point Program to "minors."

John & MC5 stopped on their way to a gig in Canada. Special notices had been placed by Detroit police. John held on $10,000 bond.

Pun and other Party members under Surveillance during Nat'l Underground Media Conference organized by A2 ARGUS and White Panther Party Pun busted white innocently standing in alley near downtown bar.

65 national media representatives held at gunpoint and harassed for 5 hours.

Charges based solely on testimony of David Valler, admitted bomber brought from prison to grand jury by federal agents. (Valler later begins anti-freak series from prison for Detroit News, gets early parole on bombing convictions.) Pun does 15 months in county jail under $100,000 bond, John already in Marquette Prison. Wiretap against Pun brought to light, called "irrelevant to the prosecution" by government.

Police say that van in which Pun was riding when busted for CIA charges had a rifle and shot guns in it. State waited 2 years, until Pun was released from Federal custody, to press charges.

Police found false draft cards when they busted Pun on CIA beef After 15 months in Wayne & Kent Co. Jails, Pun pled guilty to get out of the Co. Jail and into Federal Prison.

John shipped out of Marquette for participating in strike in support of Black Studies Program demand. Moved to solitary confinement in Jackson, moved from solitary to "hole" for "typing 10 Point Program Black Panther Party."

Deal made so that if Pun pled guilty  Charges would be dropped against Genie.

Friends of the RPP had organized a voter registration rally at the Michigan Union, Board of Regents deny use of Union.

On the birthday anniversaries of Malcolm X and Ho Chi Minh bomb craters were dug by A2 anti-War residents. At two separate digs over, 50 people were arrested.

In draft card case Federal Judge ruled Pun was to get credit for time served in Wayne Co. Jail. Prison authorities ruled 11 months in jail did not count.

Wire tapping revealed  during the course of the '69"'72 CIA CONSPIRACY TRAIL was ruled illegal by the U.S. Supreme Court because no warrant had been obtained.

Fines paid by Sinclair and MC5.

All charges dropped by the prosecution.

Case dismissed by prosecution 21/2 years later after historic Supreme Court decision curbing the power of the President to wiretap without a search warrant on grounds of "national security." John, Pun, and Jack's case again used as test case

. Charges dismissed by the Court

Guilty pleas entered, both sentenced to 5 years in Federal Penitentiary.

Pun pled guilty, sentenced to 6 months to run with his other sentences.

District Court has turned down  the suit, appeal is planned.

All charges dropped by the prosecution.

Bonds reduced after a series of hearings taking 55 days in all. Trail date still pending July 16 1973