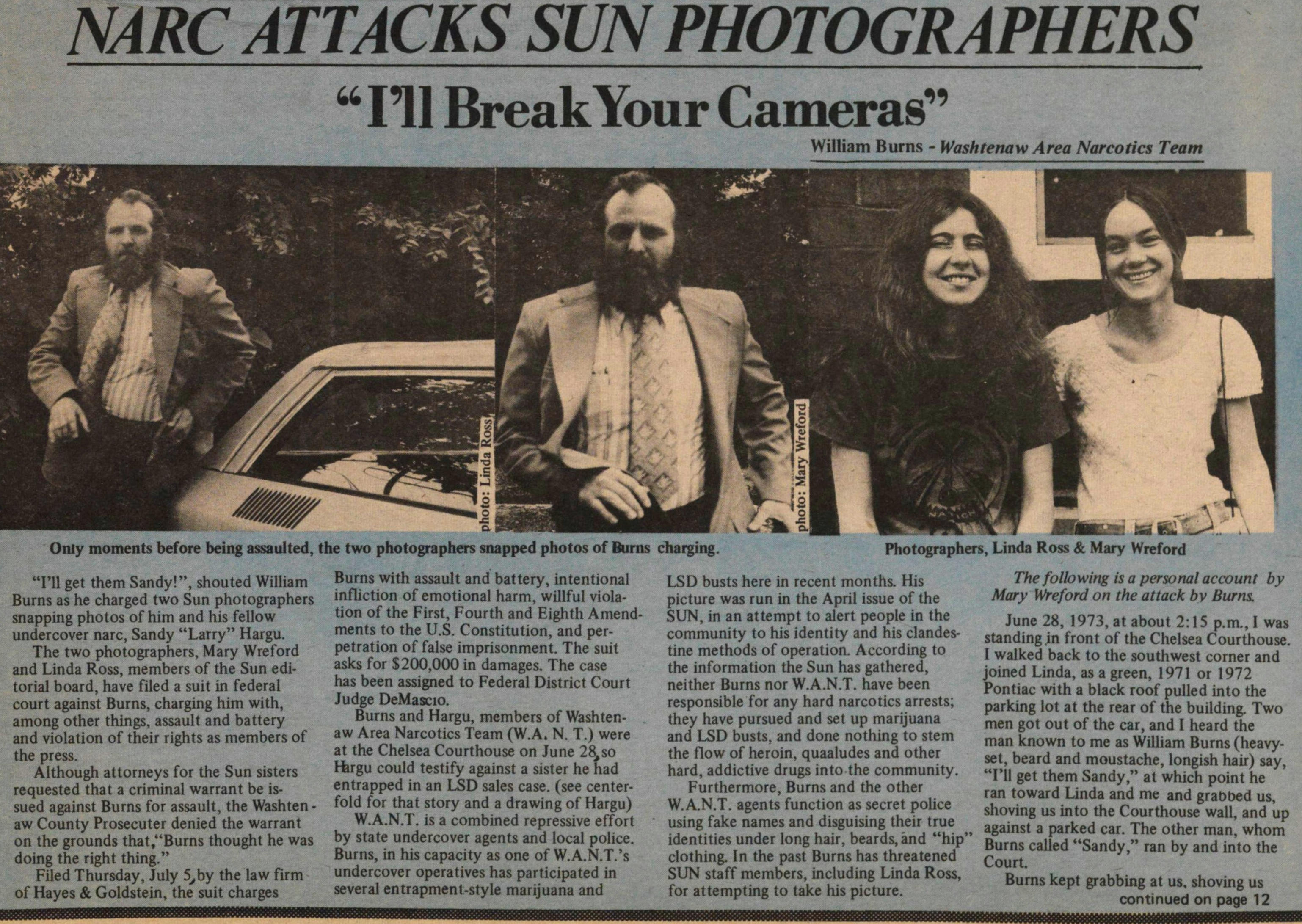 "I'll get them Sandy!", shouted William Burns as he charged two Sun photographers snapping photos of him and his fellow undercover narc, Sandy "Larry" Hargu.

The two photographers, Mary Wreford and Linda Ross, members of the Sun editorial board, have filed a suit in federal court against Burns, charging him with, among other things, assault and battery and violation of their rights as members of the press.

Although attorneys for the Sun sisters requested that a criminal warrant be issued against Burns for assault, the Washtenaw County Prosecutor denied the warrant on the grounds that,"Burns thought he was doing the right thing."

Filed Thursday, July 5, by the law firm of Hayes & Goldstein, the suit charges Burns with assault and battery, intentional infliction of emotional harm, willful violation of the First, Fourth and Eighth Amendments to the U.S. Constitution, and perpetration of false imprisonment. The suit asks for $200,000 in damages. The case has been assigned to Federal District Court Judge DeMascio.

Burns and Hargu, members of Washtenaw Area Narcotics Team (W.A. N. T.) were at the Chelsea Courthouse on June 28 so Hargu could testify against a sister he had entrapped in an LSD sales case, (see centerfold for that story and a drawing of Hargu)

W.A.N.T. is a combined repressive effort by state undercover agents and local police. Burns, in his capacity as one of W.A.N.T.'s undercover operatives has participated in several entrapment-style marijuana and LSD busts here in recent months. His picture was run in the April issue of the SUN, in an attempt to alert people in the community to his identity and his clandestine methods of operation. According to the information the Sun has gathered, neither Burns nor W.A.N.T. have been responsible for any hard narcotics arrests; they have pursued and set up marijuana and LSD busts. and done nothing to stem the flow of heroin, quaaludes and other hard, addictive drugs into the community.

Furthermore, Burns and the other W.A.N.T. agents function as secret police using fake names and disguising their true identities under long hair, beards, and "hip" clothing. In the past Burns has threatened SUN staff members, including Linda Ross, for attempting to take his picture.

The following is a personal account by Mary Wreford on the attack by Burns.

June 28, 1973, at about 2:15 p.m., I was standing .in front of the Chelsea Courthouse. I walked back to the southwest corner and joined Linda, as a green, 1971 or 1972 Pontiac with a black roof pulled into the parking lot at the rear of the building. Two men got out of the car, and I heard the man known to me as William Burns (heavyset, beard and moustache, longish hair) say, "I'll get them Sandy," at which point he ran toward Linda and me and grabbed us, shoving us into the Courthouse wall, and up against a parked car. The other man, whom Burns called "Sandy," ran by and into the Court.

Burns kept grabbing at us, shoving us

back into the parked car, screaming things like, "Give me that camera - give me that film!" Linda was screaming at the top of her lungs the entire time, as we both struggled to eet away from him. I yelled at Burns"You're assaulting us, what you are doing is against the law," but he continued to wrestle and hold us, and, as I kept struggling to free myself from his graspf Burns shoved me to the ground, cutting my hand in the process. I pulled away and started to run, but he grabbed the back collar of my coat with his free hand (holding Linda up against the parked car with his other hand), pulled my coat back off my shoulders and, when I jerked away, pulled my hair and then grabbed my camera strap, pulling on it and screaming at me "Give me that camera!" I held onto the camera with my hands, fearing it would be smashed, and Burns continued to jerk the strap, choking me, till the strap snapped and I pulled back, free. As I lunged away from Burns, who still had Linda pushed up against the car, I saw the Judge, and another manfrom the court, and about five women coming up, emerging from the side door of the Courthouse, apparently attracted by Linda's continuous screams. One woman said to me, "Are they fooling?" or words to that effect, and I responded "No! That man is assaulting her!" Burns was screaming at everyone, "I'm a narcotics officer, they 're taking my picture, I'm afraid for my íife, I want that film confiscated," and so on. Then a Chelsea pólice Sergeant, named McDougal, ran up and Burns stepped back, still yelling orders. The policeman started to grab at Linda and her camera, and 1 said "You can't take that, this is a public street and we have every right to be here and that man just assaulted us!" The policeman then let go of Linda and said, "Do you want to file a complaint?" and we said, "Yes, of course!" We then went inside the Courthouse and the policeman asked for our (Linda's and mine - not Burns') identification, and took down our names, addresses, phone numbers and birth dates, allowing Burns, who had stepped behind the counter with him to take them down as well. I said'I want his name and address, too," and the policeman replied, "that will be public information, your lawyer can request it." Burns continued to storm around and make vague threats, telling Linda he was going to "confíscate" her driver's license because it was "mutilated," and saying we assaulted him and so on. Linda and I went back outside, then later filed a statement at the Chelsea Pólice Department, only to discover Burns had filed a statement chargine Linda with assault. (Note - Burns never followed up on his flimsy charges.