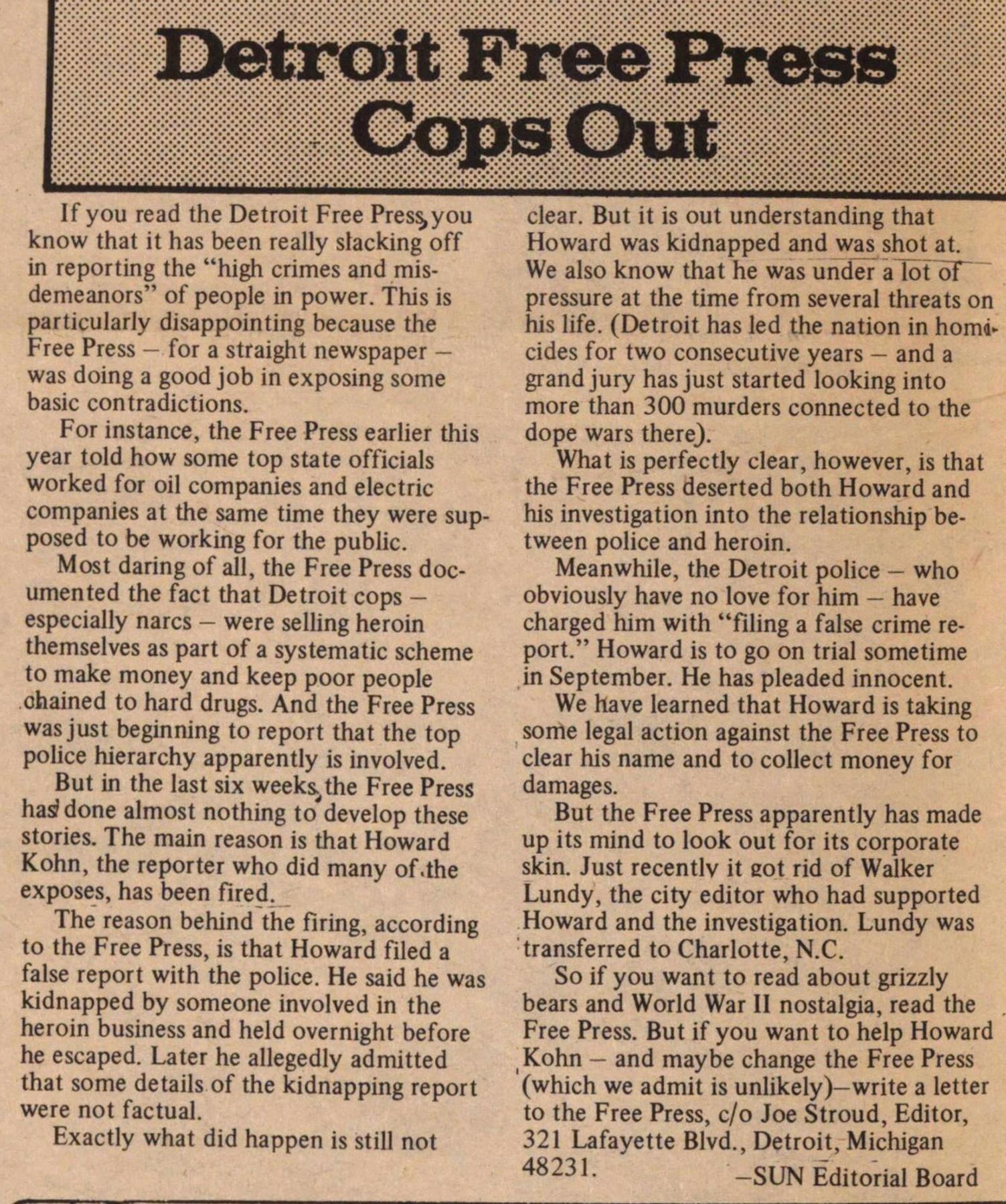 If you read the Detroit Free Press, you know that it has been really slacking off in reporting the "high crimes and misdemeanors" of people in power. This is particularly disappointing because the Free Press -- for a straight newspaper -- was doing a good job in exposing some basic contradictions.

For instance, the Free Press earlier this year told how some top state officials worked for oil companies and electric companies at the same time they were supposed to be working for the public.

Most daring of all, the Free Press documented the fact that Detroit cops -- especially narcs -- were selling heroin themselves as part of a systematic scheme to make money and keep poor people chained to hard drugs. And the Free Press was just beginning to report that the top police hierarchy apparently is involved.

But in the last six weeks, the Free Press has done almost nothing to develop these stories. The main reason is that Howard Kohn, the reporter who did many of the exposes, has been fired.

The reason behind the firing, according to the Free Press, is that Howard filed a false report with the police. He said he was kidnapped by someone involved in the heroin business and held overnight before he escaped. Later he allegedly admitted that some details of the kidnapping report were not factual.

Exactly what did happen is still not clear. But it is out understanding that Howard was kidnapped and was shot at. We also know that he was under a lot of pressure at the time from several threats on his life. (Detroit has led the nation in homicides for two consecutive years -- and a grand jury has just started looking into more than 300 murders connected to the dope wars there).

What is perfectly clear, however, is that the Free Press deserted both Howard and his investigation into the relationship between police and heroin.

Meanwhile, the Detroit police -- who obviously have no love for him -- have charged him with "filing a false crime report." Howard is to go on trial sometime in September. He has pleaded innocent.

We have learned that Howard is taking some legal action against the Free Press to clear his name and to collect money for damages.

But the Free Press apparently has made up its mind to look out for its corporate skin. Just recently it got rid of Walker Lundy, the city editor who had supported Howard and the investigation. Lundy was transferred to Charlotte, N.C.