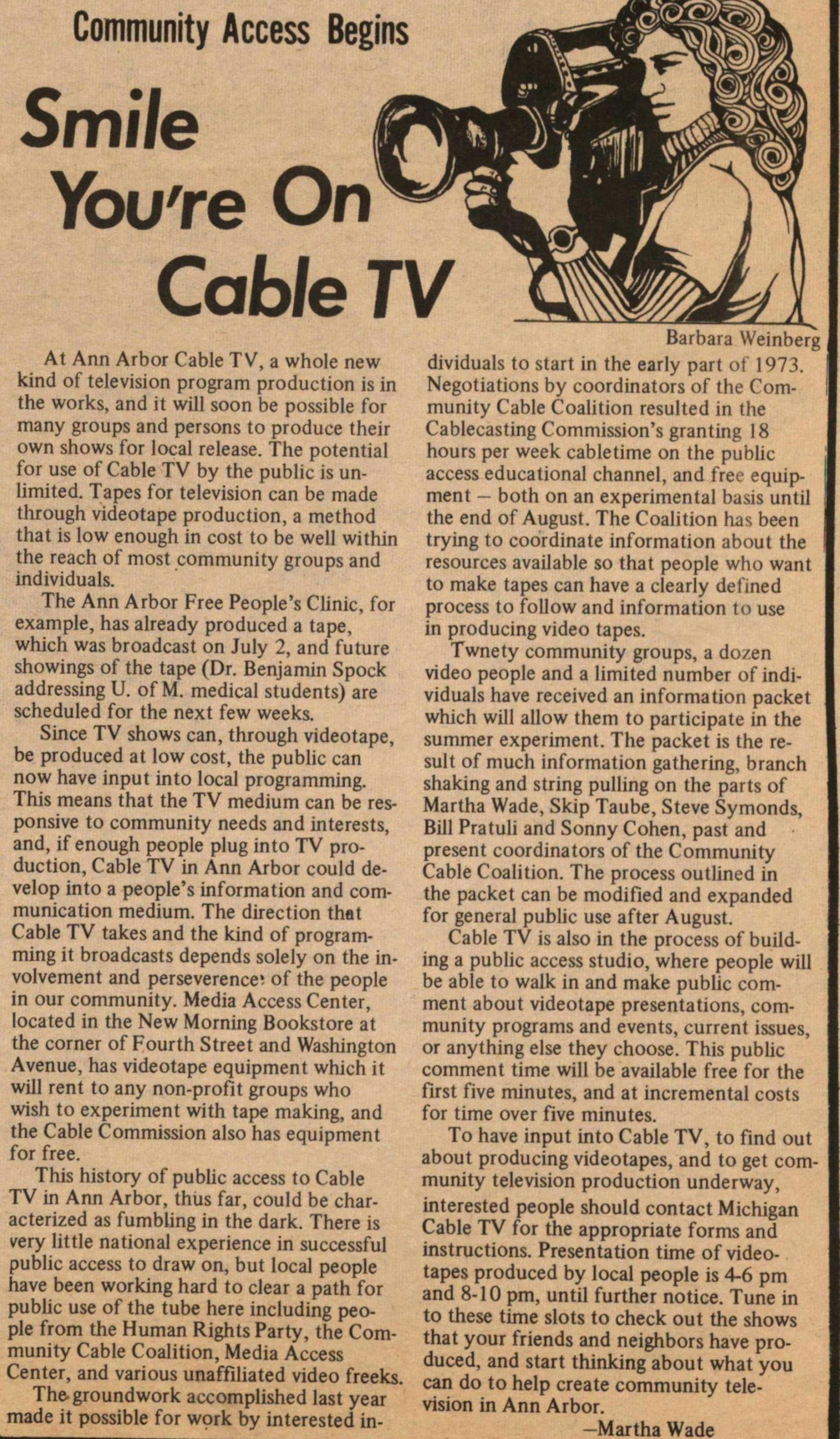 Smile You're On Cable TV

At Ann Arbor Cable TV, a whole new kind of television program production is in the works, and it will soon be possible for many groups and persons to produce their own shows for local release. The potential for use of Cable TV by the public is unlimited. Tapes for television can be made through videotape production, a method that is low enough in cost to be well within the reach of most community groups and individuals.

The Ann Arbor Free People's Clinic, for example, has already produced a tape, which was broadcast on July 2, and future showings of the tape (Dr. Benjamin Spock addressing U. of M. medical students) are scheduled for the next few weeks.

Since TV shows can, through videotape, be produced at low cost, the public can now have input into local programming. This means that the TV medium can be responsive to community needs and interests, and, if enough people plug into TV production, Cable TV in Ann Arbor could develop into a people's information and communication medium. The direction that Cable TV takes and the kind of programming it broadcasts depends solely on the involvement and perseverance of the people in our community. Media Access Center, located in the New Morning Bookstore at the corner of Fourth Street and Washington Avenue, has videotape equipment which it will rent to any non-profit groups who wish to experiment with tape making, and the Cable Commission also has equipment for free.

This history of public access to Cable TV in Ann Arbor, thus far, could be characterized as fumbling in the dark. There is very little national experience in successful public access to draw on, but local people have been working hard to clear a path for public use of the tube here including people from the Human Rights Party, the Community Cable Coalition, Media Access Center, and various unaffiliated video freeks.

The groundwork accomplished last year made it possible for work by interested individuals to start in the early part of 1973. Negotiations by coordinators of the Community Cable Coalition resulted in the Cablecasting Commission's granting 18 hours per week cabletime on the public access educational channel, and free equipment -- both on an experimental basis until the end of August. The Coalition has been trying to coordinate information about the resources available so that people who want to make tapes can have a clearly defined process to follow and information to use in producing video tapes.

Twenty community groups, a dozen video people and a limited number of individuals have received an information packet which will allow them to participate in the summer experiment. The packet is the result of much information gathering, branch shaking and string pulling on the parts of Martha Wade, Skip Taube, Steve Symonds, Bill Pratuli and Sonny Cohen, past and present coordinators of the Community Cable Coalition. The process outlined in the packet can be modified and expanded for general public use after August.

Cable TV is also in the process of building a public access studio, where people will be able to walk in and make public comment about videotape presentations, community programs and events, current issues, or anything else they choose. This public comment time will be available free for the first five minutes, and at incremental costs for time over five minutes.

To have input into Cable TV, to find out about producing videotapes, and to get community television production underway, interested people should contact Michigan Cable TV for the appropriate forms and instructions. Presentation time of videotapes produced by local people is 4-6 pm and 8-10 pm, until further notice. Tune in to these time slots to check out the shows that your friends and neighbors have produced, and start thinking about what you can do to help create community television in Ann Arbor.