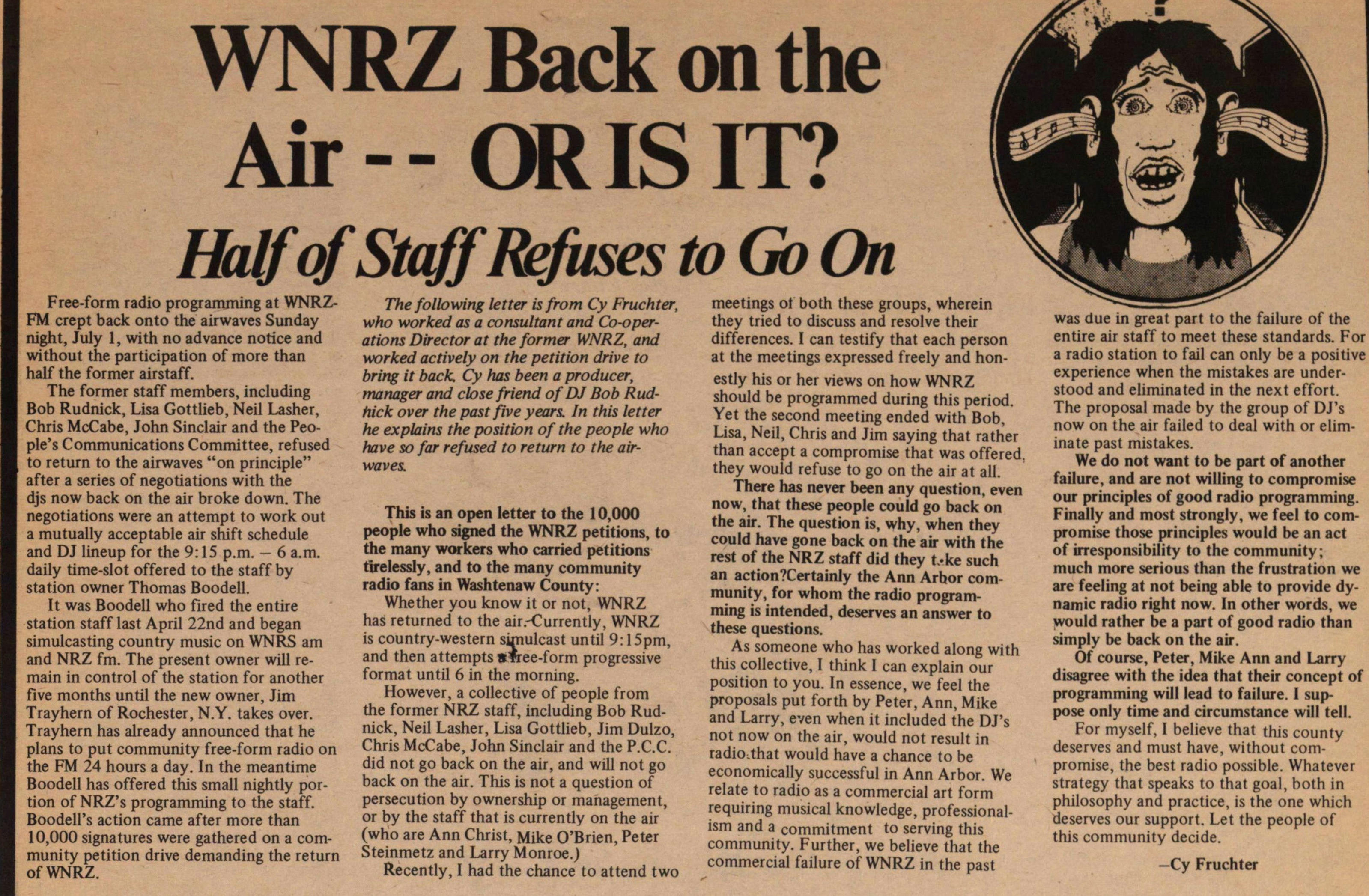 Half of Staff Refuses to Go On

Free-form radio programming at WNRZ-FM crept back onto the airwaves Sunday I night, July 1, with no advance notice and without the participation of more than I half the former airstaff.

The former staff members, including Bob Rudnick, Lisa Gottlieb, Neil Lasher, Chris McCabe, John Sinclair and the People's Communications Committee, refused I to return to the airwaves "on principle" after a series of negotiations with the djs now back on the air broke down. The negotiations were an attempt to work out a mutually acceptable air shift schedule and DJ lineup for the 9:15 p.m. - 6 a.m. daily time-slot offered to the staff by station owner Thomas Boodell.

It was Boodell who fired the entire station staff last April 22nd and began simulcasting country music on WNRS am and NRZ fm. The present owner will remain in control of the station for another five months until the new owner, Jim Trayhern of Rochester, N.Y. takes over. Trayhern has already announced that he I plans to put community free-form radio on the FM 24 hours a day. In the meantime Boodell has offered this small nightly portion of NRZ's programming to the staff. Boodell's action came after more than 10,000 signatures were gathered on a community petition drive demanding the return of WNRZ.

The following letter is from Cy Fruchter, who worked as a consultant and Co-operations Director at the former WNRZ, and worked actively on the petition drive to bring it back. Cy has been a producer, manager and close friend of DJ Bob Rudnick over the past five years. In this letter he explains the position of the people who have so far refused to return to the airwaves.

This is an open letter to the 10,000 people who signed the WNRZ petitions, to the many workers who carried petitions tirelessly, and to the many community radio fans in Washtenaw County:

Whether you know it or not, WNRZ has returned to the air. Currently, WNRZ is country-western simulcast until 9:15pm, and then attempts a free-form progressive format until 6 in the morning.

However, a collective of people from the former NRZ staff, including Bob Rudnick, Neil Lasher, Lisa Gottlieb, Jim Dulzo, Chris McCabe, John Sinclair and the P.C.C. did not go back on the air, and will not go back on the air. This is not a question of persecution by ownership or management, or by the staff that is currently on the air (who are Ann Christ, Mike O'Brien, Peter Steinmetz and Larry Monroe.)

Recently, I had the chance to attend two meetings ot both these groups, wherein they tried to discuss and resolve their differences. I can testify that each person at the meetings expressed freely and honestly nis or her views on how WNRZ should be programmed during this period. Yet the second meeting ended with Bob, Lisa, Neil, Chris and Jim saying that rather than accept a compromise that was offered. they would refuse to go on the air at all.

There has never been any question, even now, that these people could go back on the air. The question is, why, when they could have gone back on the air with the rest of the NRZ staff did they take such an action? Certainly the Ann Arbor community, for whom the radio programming is intended, deserves an answer to these questions.

As someone who has worked along with this collective, I think I can explain our position to you. In essence, we feel the proposals put forth by Peter, Ann, Mike and Larry, even when it included the DJ's not now on the air, would not result in radio that would have a chance to be economically successful in Ann Arbor. We relate to radio as a commercial art form requiring musical knowledge, professionalism and a commitment to serving this community. Further, we believe that the commercial failure of WNRZ in the past was due in great part to the failure of the entire air staff to meet these standards. For a radio station to fail can only be a positive experience when the mistakes are understood and eliminated in the next effort. The proposal made by the group of DJ's now on the air failed to deal with or eliminate past mistakes.

We do not want to be part of another failure, and are not willing to compromise our principles of good radio programming. Finally and most strongly, we feel to compromise those principles would be an act of irresponsibility to the community; much more serious than the frustration we are feeling at not being able to provide dynamic radio right now. In other words, we would rather be a part of good radio than simply be back on the air.

Of course, Peter, Mike, Ann and Larry disagree with the idea that their concept of programming will lead to failure. I suppose only time and circumstance will tell.

For myself, I believe that this county deserves and must have, without compromise, the best radio possible. Whatever strategy that speaks to that goal, both in philosophy and practice, is the one which deserves our support. Let the people of this community decide.