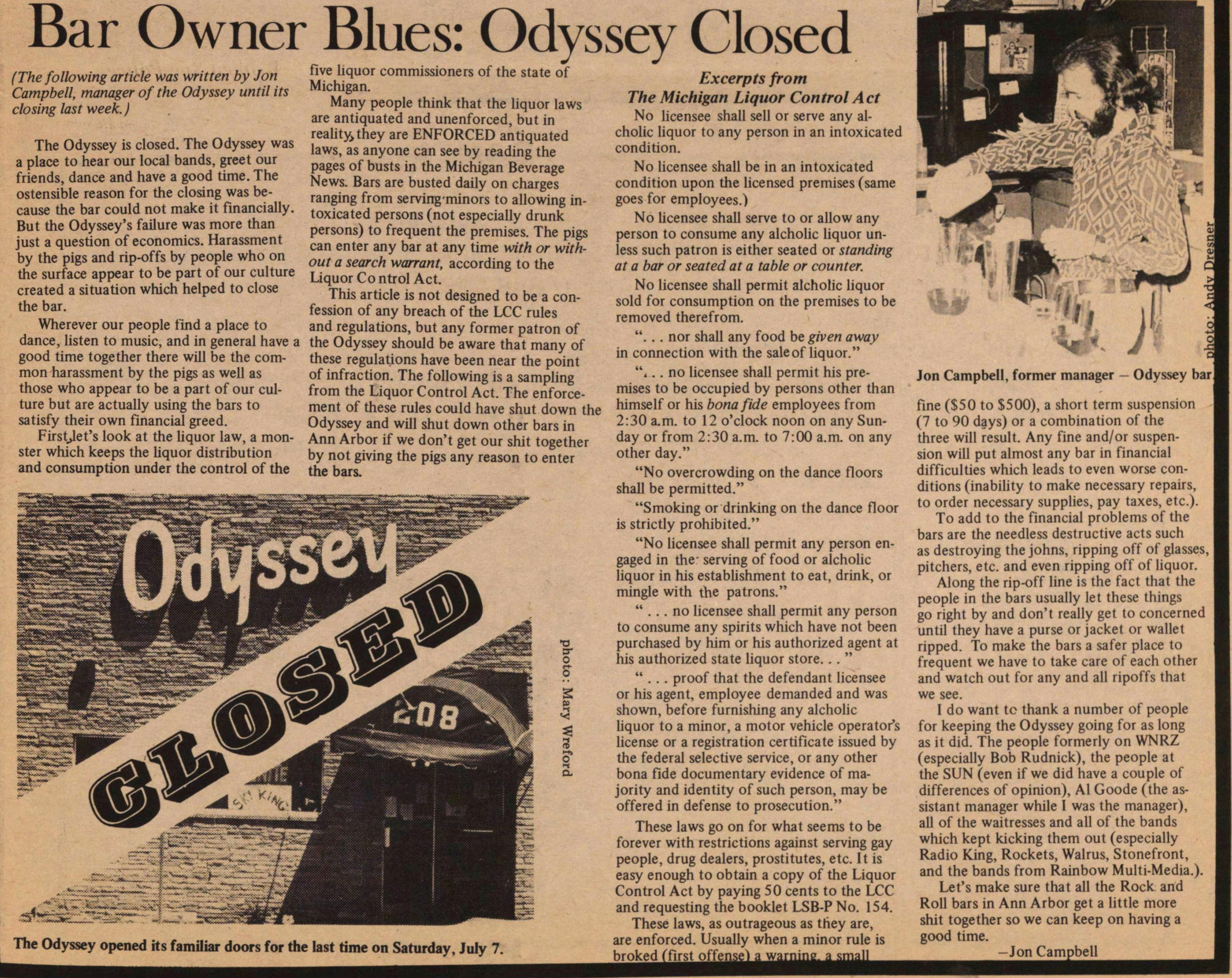 (The following article was written by Jon Campbell, manager of the Odyssey until its closing last week.)

The Odyssey is closed. The Odyssey was a place to hear our local bands, greet our friends, dance and have a good time. The ostensible reason for the closing was because the bar could not make it financially. But the Odyssey’s failure was more than just a question of economics. Harassment by the pigs and rip-offs by people who on the surface appear to be part of our culture created a situation which helped to close the bar.

Wherever our people find a place to dance, listen to music, and in general have a good time together there will be the common harassment by the pigs as well as those who appear to be a part of our culture but are actually using the bars to satisfy their own financial greed.

First let’s look at the liquor law, a monster which keeps the liquor distribution and consumption under the control of the five liquor commissioners of the state of Michigan.

Many people think that the liquor laws are antiquated and unenforced, but in reality they are ENFORCED antiquated laws, as anyone can see by reading the pages of busts in the Michigan Beverage News. Bars are busted daily on charges ranging from serving minors to allowing intoxicated persons (not especially drunk persons) to frequent the premises. The pigs can enter any bar at any time with or without a search warrant, according to the Liquor Control Act.

This article is not designed to be a confession of any breach of the LCC rules and regulations, but any former patron of the Odyssey should be aware that many of these regulations have been near the point of infraction. The following is a sampling from the Liquor Control Act. The enforcement of these rules could have shut down the Odyssey and will shut down other bars in Ann Arbor if we don’t get our shit together by not giving the pigs any reason to enter the bars.

No licensee shall sell or serve any alcoholic liquor to any person in an intoxicated condition.

No licensee shall be in an intoxicated condition upon the licensed premises (same goes for employees.)

No licensee shall serve to or allow any person to consume any alcoholic liquor unless such patron is either seated or standing at a bar or seated at a table or counter.

No licensee shall permit alcoholic liquor sold for consumption on the premises to be removed therefrom.

“. . . nor shall any food be given away in connection with the sale of liquor.”

“No overcrowding on the dance floors shall be permitted.”

“Smoking or drinking on the dance floor is strictly prohibited.”

“No licensee shall permit any person engaged in serving of food or alcoholic liquor in his establishment to eat, drink, or mingle with the patrons.”

“. . . no licensee shall permit any person to consume any spirits which have not been purchased by him or his authorized agent at his authorized state liquor store. . .”

“. . . proof that the defendant licensee or his agent, employee demanded and was shown, before furnishing any alcoholic liquor to a minor, a motor vehicle operator’s license or a registration certificate issued by the federal selective service, or any other bona fide documentary evidence of majority and identity of such person, may be offered in defense to prosecution.”

These laws go on for what seems to be forever with restrictions against serving gay people, drug dealers, prostitutes, etc. It is easy enough to obtain a copy of the Liquor Control Act by paying 50 cents to the LCC and requesting the booklet LSB-P No. 154.

These laws, as outrageous as they are, are enforced. Usually when a minor rule is broked (first offense) a warning, a small fine ($50 to $500), a short term suspension (7 to 90 days) or a combination of the three will result. Any fine and/or suspension will put almost any bar in financial difficulties which leads to even worse conditions (inability to make necessary repairs, to order necessary supplies, pay taxes, etc.). To add to the financial problems of the bars are the needless destructive acts such as destroying the johns, ripping off of glasses, pitchers, etc. and even ripping off of liquor.

Along the rip-off line is the fact that the people in the bars usually let these things go right by and don’t really get too concerned until they have a purse or jacket or wallet ripped. To make the bars a safer place to frequent we have to take care of each other and watch out for any and all ripoffs that we see.

I do want to thank a number of people for keeping the Odyssey going for as long as it did. The people formerly on WNRZ (especially Bob Rudnick), the people at the SUN (even if we did have a couple of differences of opinion), Al Goode (the assistant manager while I was the manager), all of the waitresses and all of the bands which kept kicking them out (especially Radio King, Rockets, Walrus, Stonefront, and the bands from Rainbow Multi-Media.).

Let’s make sure that all the Rock and Roll bars in Ann Arbor get a little more shit together so we can keep on having a good time.

photo: Mary Wreford
The Odyssey opened its familiar doors for the last time on Saturday, July 7.