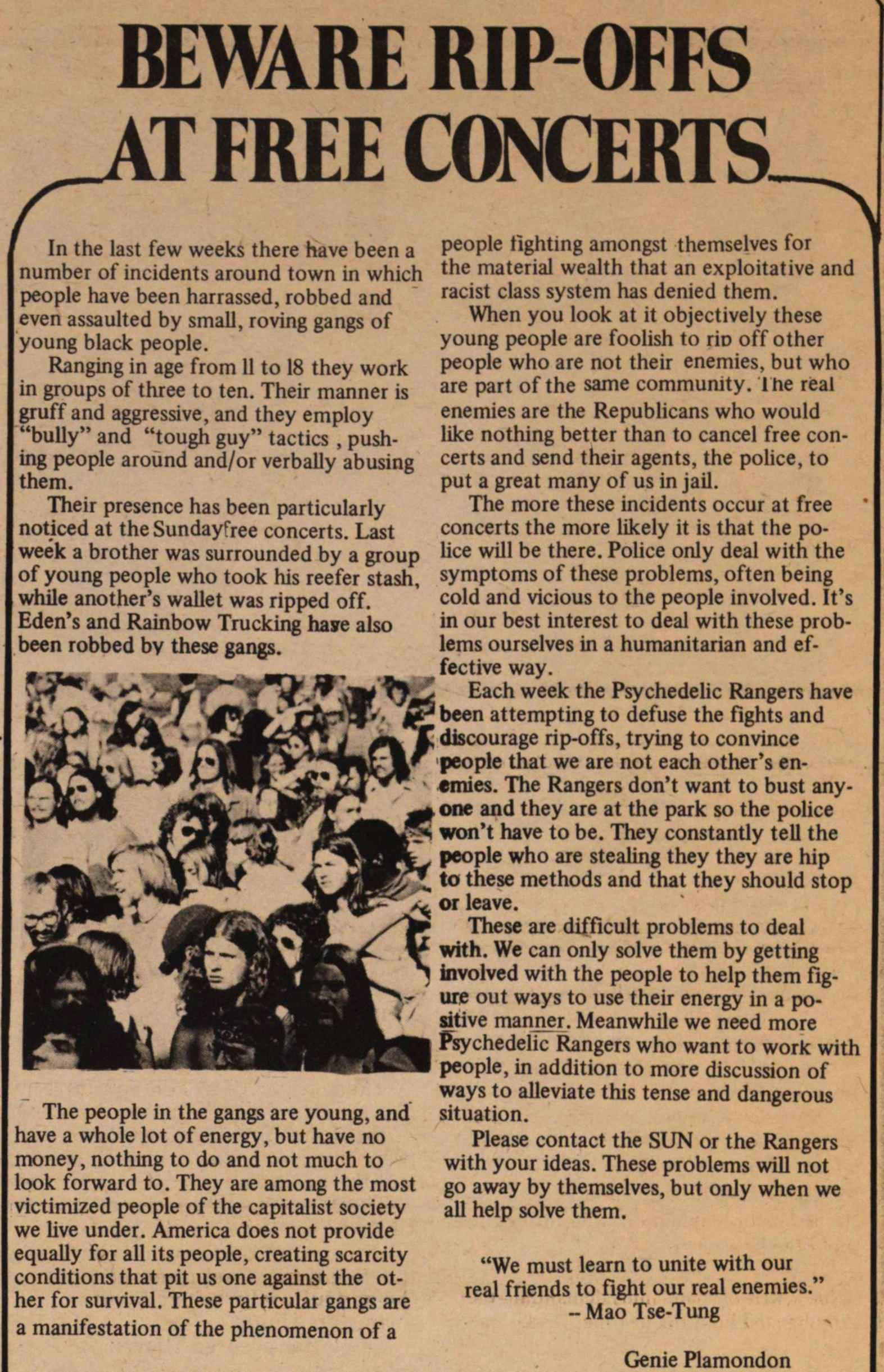 In the last few weeks there have been a number of incidents around town in which people have been harassed, robbed and even assaulted by small, roving gangs of young black people.

Ranging in age from 11 to 18 they work in groups of three to ten. Their manner is gruff and aggressive, and they employ "bully" and "tough guy" tactics, pushing people around and/or verbally abusing them.

Their presence has been particularly noticed at the Sunday free concerts. Last week a brother was surrounded by a group of young people who took his reefer stash, while another's wallet was ripped off. Eden's and Rainbow Trucking have also been robbed by these gangs.

The people in the gangs are young, and have a whole lot of energy, but have no money, nothing to do and not much to look forward to. They are among the most victimized people of the capitalist society we live under. America does not provide equally for all its people, creating scarcity conditions that pit us one against the other for survival. These particular gangs are a manifestation of the phenomenon of a people fighting amongst themselves for the material wealth that an exploitative and racist class system has denied them.

When you look at it objectively these young people are foolish to rip off other people who are not their enemies, but who are part of the same community. The real enemies are the Republicans who would like nothing better than to cancel free concerts and send their agents, the police, to put a great many of us in jail.

The more these incidents occur at free concerts the more likely it is that the police will be there. Police only deal with the symptoms of these problems, often being cold and vicious to the people involved. It's in our best interest to deal with these problems ourselves in a humanitarian and effective way.

Each week the Psychedelic Rangers have been attempting to defuse the fights and discourage rip-offs, trying to convince people that we are not each other's enemies. The Rangers don't want to bust anyone and they are at the park so the police won't have to be. They constantly tell the people who are stealing they they are hip to these methods and that they should stop or leave.

These are difficult problems to deal with. We can only solve them by getting involved with the people to help them figure out ways to use their energy in a positive manner. Meanwhile we need more Psychedelic Rangers who want to work with people, in addition to more discussion of ways to alleviate this tense and dangerous situation.

Please contact the SUN or the Rangers with your ideas. These problems will not go away by themselves, but only when we all help solve them.

"We must learn to unite with our real friends to fight our real enemies."
-- Mao Tse-Tung