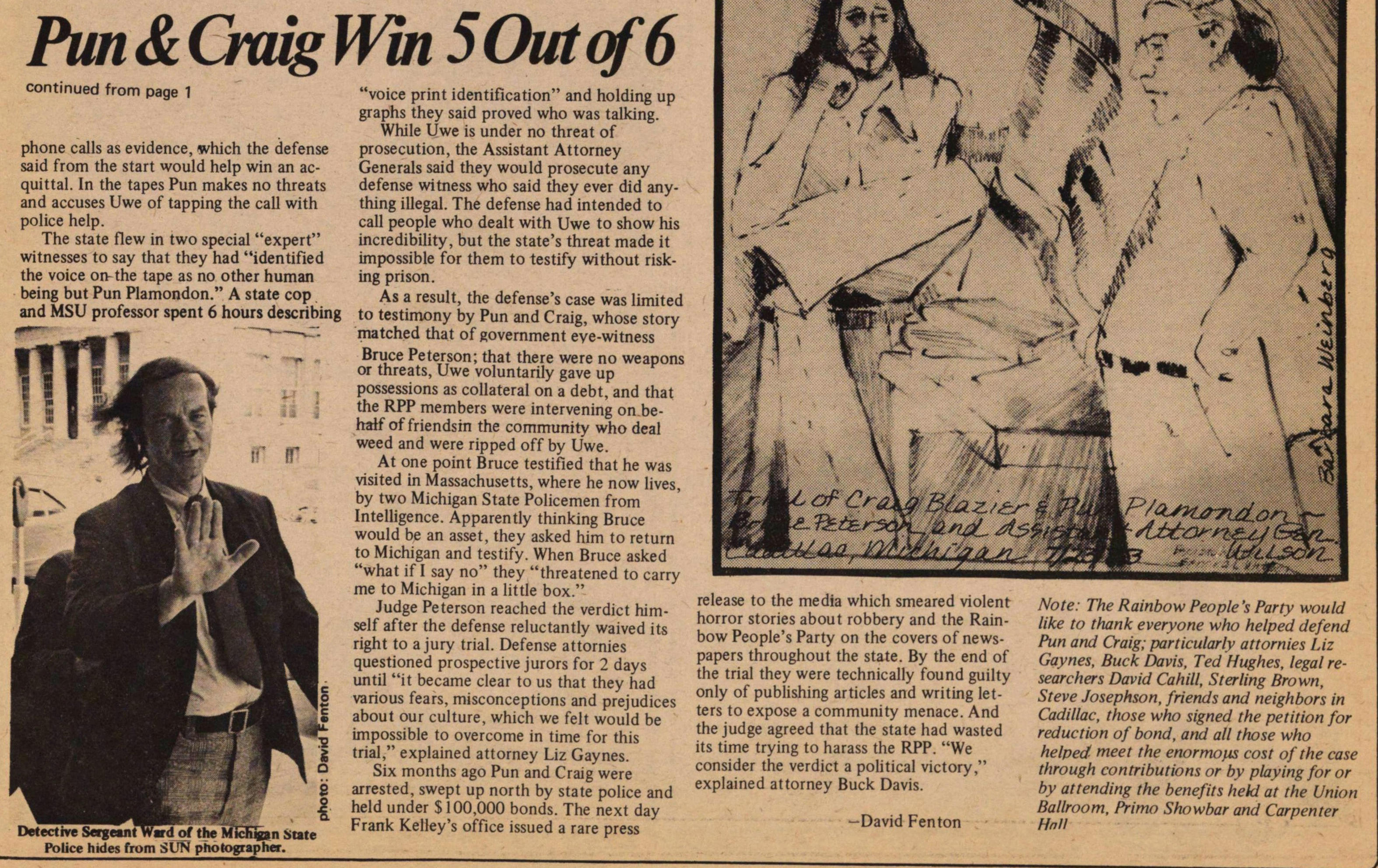 phone calls as evidence, which the defense said from the start would help win an acquittal. In the tapes Pun makes no threats and accuses Uwe of tapping the call with police help.

The state flew in two special "expert" witnesses to say that they had "identified the voice on the tape as no other human being but Pun Plamondon." A state cop and MSU professor spent 6 hours describing "voice print identification" and holding up graphs they said proved who was talking.

While Uwe is under no threat of prosecution, the Assistant Attorney Generals said they would prosecute any defense witness who said they ever did anything illegal. The defense had intended to call people who dealt with Uwe to show his incredibility, but the state's threat made it impossible for them to testify without risking prison.

As a result, the defense's case was limited to testimony by Pun and Craig, whose story matched that of government eye-witness Bruce Peterson; that there were no weapons or threats, Uwe voluntarily gave up possessions as collateral on a debt, and that the RPP members were intervening on behalf of friends in the community who deal weed and were ripped off by Uwe.

At one point Bruce testified that he was visited in Massachusetts, where he now lives, by two Michigan State Policemen from Intelligence. Apparently thinking Bruce would be an asset, they asked him to return to Michigan and testify. When Bruce asked "what if I say no" they "threatened to carry me to Michigan in a little box."

Judge Peterson reached the verdict himself after the defense reluctantly waived its right to a jury trial. Defense attorneys questioned prospective jurors for 2 days until "it became clear to us that they had various fears, misconceptions and prejudices about our culture, which we felt would be impossible to overcome in time for this trial," explained attorney Liz Gaynes.

Six months ago Pun and Craig were arrested, swept up north by state police and held under $100,000 bonds. The next day Frank Kelley's office issued a rare press release to the media which smeared violent horror stories about robbery and the Rainbow People's Party on the covers of newspapers throughout the state. By the end of the trial they were technically found guilty only of publishing articles and writing letters to expose a community menace. And the judge agreed that the state had wasted its time trying to harass the RPP. "We consider the verdict a political victory," explained attorney Buck Davis.

Note: The Rainbow People 's Party would like to thank everyone who helped defend Pun and Craig; particularly attorneys Liz Gaynes, Buck Davis, Ted Hughes, legal researchers David Cahill, Sterling Brown, Steve Josephson, friends and neighbors in Cadillac, those who signed the petition for reduction of bond, and all those who helped meet the enormous cost of the case through contributions or by playing for or by attending the benefits held at the Union Ballroom, Primo Showbar and Carpenter Hall