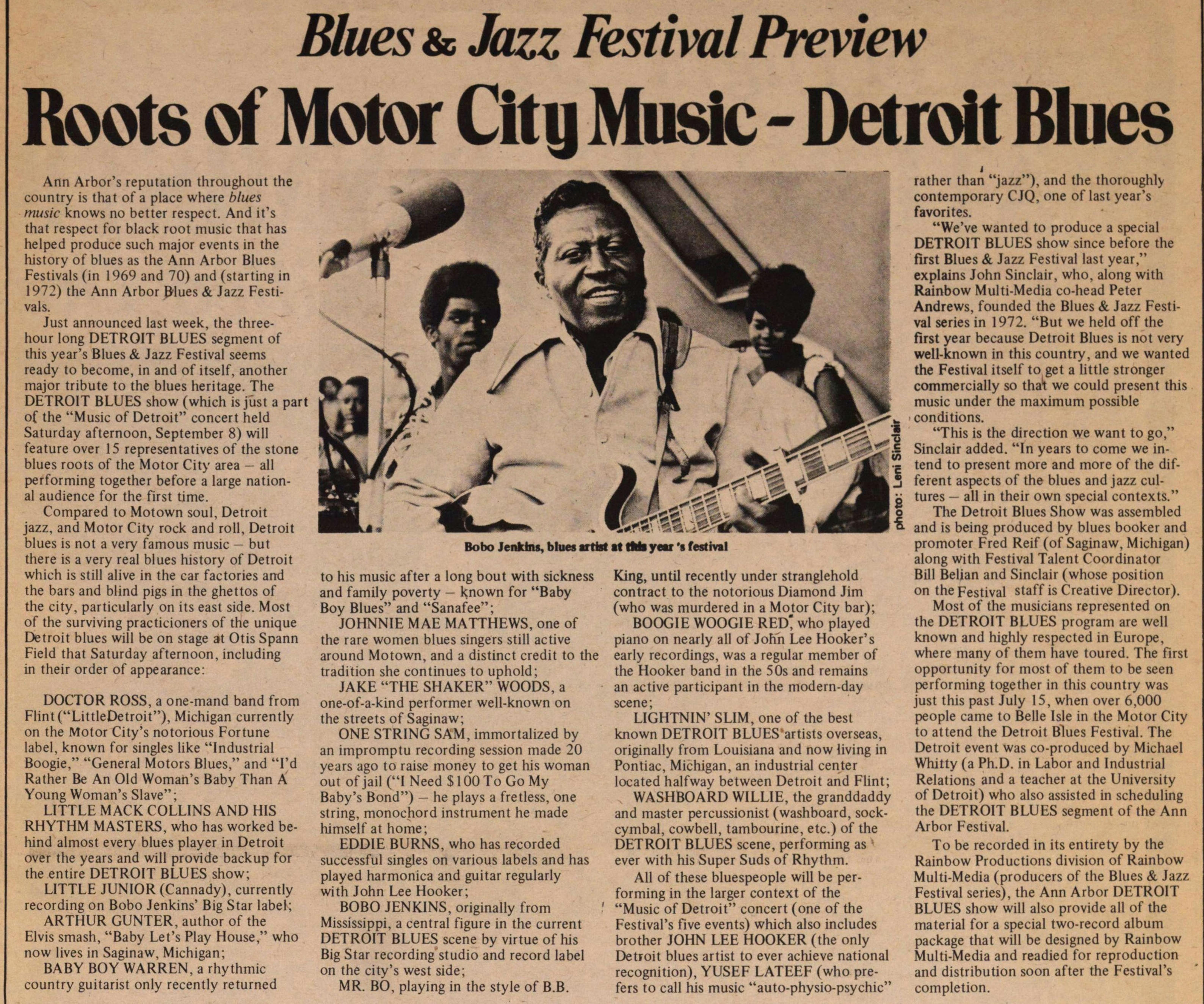 Ann Arbor's reputation throughout the country is that of a place where blues music knows no better respect. And it's that respect for black root music that has helped produce such major events in the history of blues as the Ann Arbor Blues Festivals (in 1969 and 70) and (starting in 1972) the Ann Arbor Blues & Jazz Festivals.

Just announced last week, the three-hour long DETROIT BLUES segment of this year's Blues & Jazz Festival seems ready to become, in and of itself, another major tribute to the blues heritage. The DETROIT BLUES show (which is just a part of the "Music of Detroit" concert held Saturday afternoon, September 8) will feature over 15 representatives of the stone blues roots of the Motor City area - all performing together before a large national audience for the first time.

Compared to Motown soul, Detroit jazz, and Motor City rock and roll, Detroit blues is not a very famous music - but there is a very real blues history of Detroit which is still alive in the car factories and the bars and blind pigs in the ghettos of the city, particularly on its east side. Most of the surviving practicioners of the unique Detroit blues will be on stage at Otis Spann Field that Saturday afternoon, including in their order of appearance:

DOCTOR ROSS, a one-mand band from Flint("Little Detroit"), Michigan currently on the Motor City's notorious Fortune label, known for singles like "Industrial Boogie," "General Motors Blues," and 'Id Rather Be An Old Woman's Baby Than A Young Woman's Slave";

LITTLE MACK COLLINS AND HIS RHYTHM MASTERS, who has worked behind almost every blues player in Detroit over the years and will provide backup for the entire DETROIT BLUES show;

BABY BOY WARREN, a rhythmic country guitarist only recently returned to his music after a long bout with sickness and family poverty - known for "Baby Boy Blues" and "Sanafee";

JOHNNIE MAE MATTHEWS, one of the rare women blues singers still active around Motown, and a distinct credit to the tradition she continues to uphold;

JAKE "THE SHAKER" WOODS, a one-of-a-kind performer well-known on the streets of Saginaw;

ONE STRING SAM, immortalized by an impromptu recording session made 20 years ago to raise money to get his woman out of jail ("I Need $100 To Go My Baby's Bond") - he plays a fretless, one string, monochord instrument he made himself at home;

EDDIE BURNS, who has recorded successful singles on various labels and has played harmonica and guitar regularly with John Lee Hooker;

BOBO JENKINS, originally from Mississippi, a central figure in the current DETROIT BLUES scene by virtue of his Big Star recording studio and record label on the city's west side;

MR. BO, playing in the style of B.B. King, until recently under stranglehold contract to the notorious Diamond Jim (who was murdered in a Motor City bar);

BOOGIE WOOGIE RED who played piano on nearly all of John Lee Hooker's early recordings, was a regular member of the Hooker band in the 50s and remains an active participant in the modern-day scene;

LIGHTNIN' SLIM, one of the best known DETROIT BLUES artists overseas, originally from Louisiana and now living in Pontiac, Michigan, an industrial center located halfway between Detroit and Flint;

WASHBOARD WILLIE, the granddaddy and master percussionist (washboard, sock cymbal, cowbell, tambourine, etc.) of the DETROIT BLUES scene, performing as ever with his Super Suds of Rhythm.

All of these bluespeople will be performing in the larger context of the "Music of Detroit" concert (one of the Festival's five events) which also includes brother JOHN LEE HOOKER (the only Detroit blues artist to ever achieve national recognition), YUSEF LATEEF (who prefers to call his music "auto-physio-psychic"  rather than "jazz"), and the thoroughly contemporary CJQ, one of last year's favorites.

"We've wanted to produce a special DETROIT BLUES show since before the first Blues & Jazz Festival last year," explains John Sinclair, who, along with Rainbow Multi-Media co-head Peter Andrews, founded the Blues & Jazz Festival series in 1972. "But we held off the first year because Detroit Blues is not very well-known in this country, and we wanted the Festival itself to get a little stronger commercially so that we could present this music under the maximum possible conditions.

"This is the direction we want to go," Sinclair added. "In years to come we intend to present more and more of the different aspects of the blues and jazz cultures - all in their own special contexts."

The Detroit Blues Show was assembled and is being produced by blues booker and promoter Fred Reif (of Saginaw, Michigan) along with Festival Talent Coordinator Bill Belian and Sinclair (whose position on the Festival staff is Creative Director).

Most of the musicians represented on the DETROIT BLUES program are well known and highly respected in Europe, where many of them have toured. The first opportunity for most of them to be seen performing together in this country was just this past July 15, when over 6,000 people came to Belle Isle in the Motor City to attend the Detroit Blues Festival. The Detroit event was co-produced by Michael Whitty (a Ph.D. in Labor and Industrial Relations and a teacher at the University of Detroit) who also assisted in scheduling the DETROIT BLUES segment of the Ann Arbor Festival.

To be recorded in its entirety by the Rainbow Productions division of Rainbow Multi-Media (producers of the Blues & Jazz Festival series), the Ann Arbor DETROIT BLUES show will also provide all of the material for a special two-record album package that will be designed by Rainbow Multi-Media and readied for reproduction and distribution soon after the Festival's completion.