Sexism In The Bars 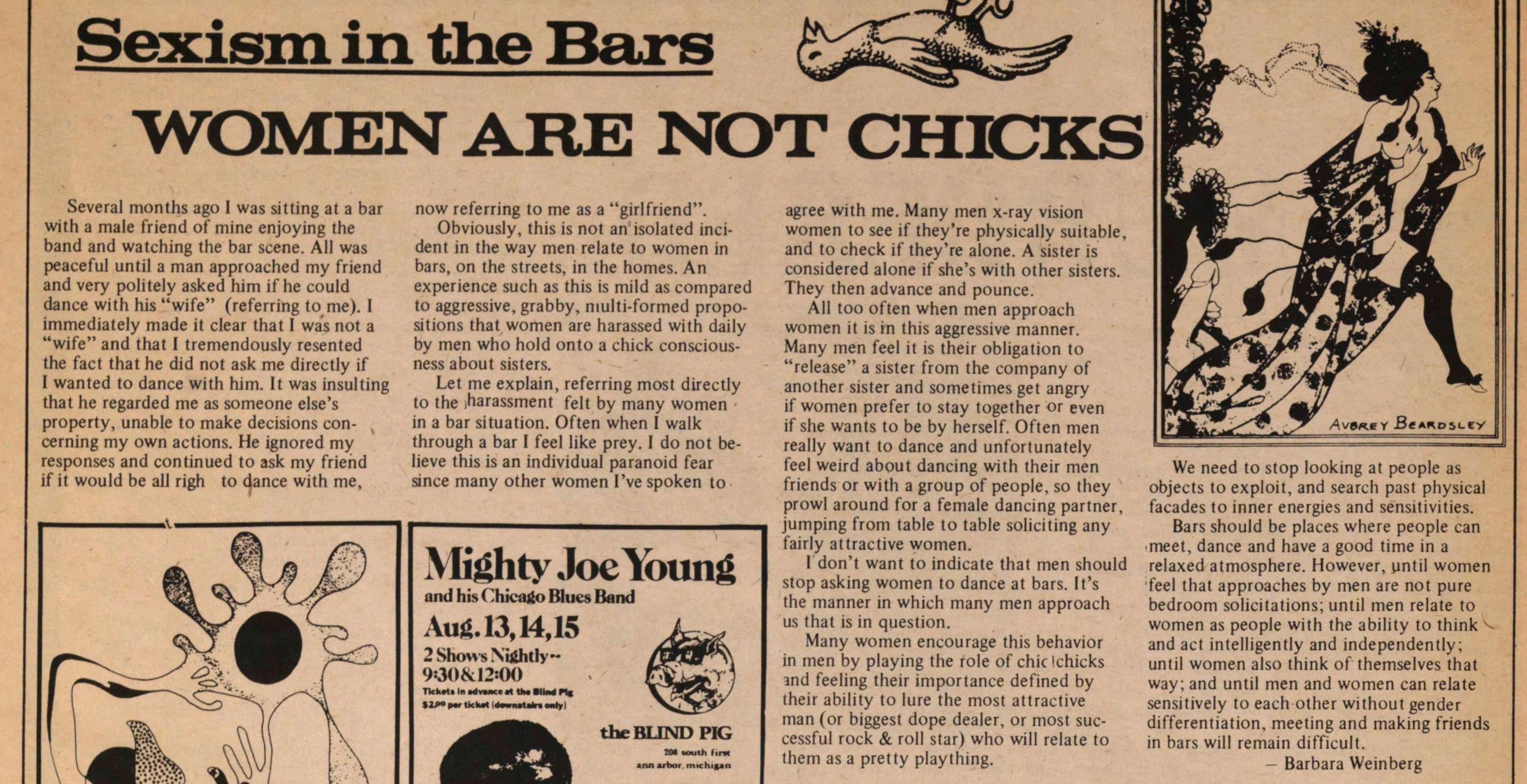 Sexism in the Bars

WOMEN ARE NOT CHICKS

Several months ago I was sitting at a bar with a male friend of mine enjoying the band and watching the bar scene. All was peaceful until a man approached my friend and very politely asked him if he could dance with his "wife" (referring to me). I immediately made it clear that I was not a "wife" and that I tremendously resented the fact that he did not ask me directly if I wanted to dance with him. It was insulting that he regarded me as someone else's property, unable to make decisions concerning my own actions. He ignored my responses and continued to ask my friend if it would be all righ to dance with me, now referring to me as a "girlfriend".

Obviously, this is not an isolated incident in the way men relate to women in bars, on the streets, in the homes. An experience such as this is mild as compared to aggressive, grabby, multi-formed propositions that women are harassed with daily by men who hold onto a chick consciousness about sisters.

Let me explain, referring most directly to the .harassment felt by many women in a bar situation. Often when I walk through a bar I feel like prey. I do not believe this is an individual paranoid fear since many other women I've spoken to agree with me. Many men x-ray vision women to see if they're physically suitable, and to check if they're alone. A sister is considered alone if she's with other sisters. They then advance and pounce.

All too often when men approach women it is in this aggressive manner. Many men feel it is their obligation to "release" a sister from the company of another sister and sometimes get angry if women prefer to stay together or even if she wants to be by herself. Often men really want to dance and unfortunately feel weird about dancing with their men friends or with a group of people, so they prowl around for a female dancing partner, jumping from table to table soliciting any fairly attractive women.

I don't want to indicate that men should stop asking women to dance at bars. It's the manner in which many men approach us that is in question.

Many women encourage this behavior in men by playing the role of chic chicks and feeling their importance defined by their ability to lure the most attractive man (or biggest dope dealer, or most successful rock & roll star) who will relate to them as a pretty plaything.

We need to stop looking at people as objects to exploit, and search past physical facades to inner energies and sensitivities.

Bars should be places where people can meet, dance and have a good time in a relaxed atmosphere. However, until women feel that approaches by men are not pure bedroom solicitations; until men relate to women as people with the ability to think and act intelligently and independently; until women also think of themselves that way; and until men and women can relate sensitively to each other without gender differentiation, meeting and making friends in bars will remain difficult.