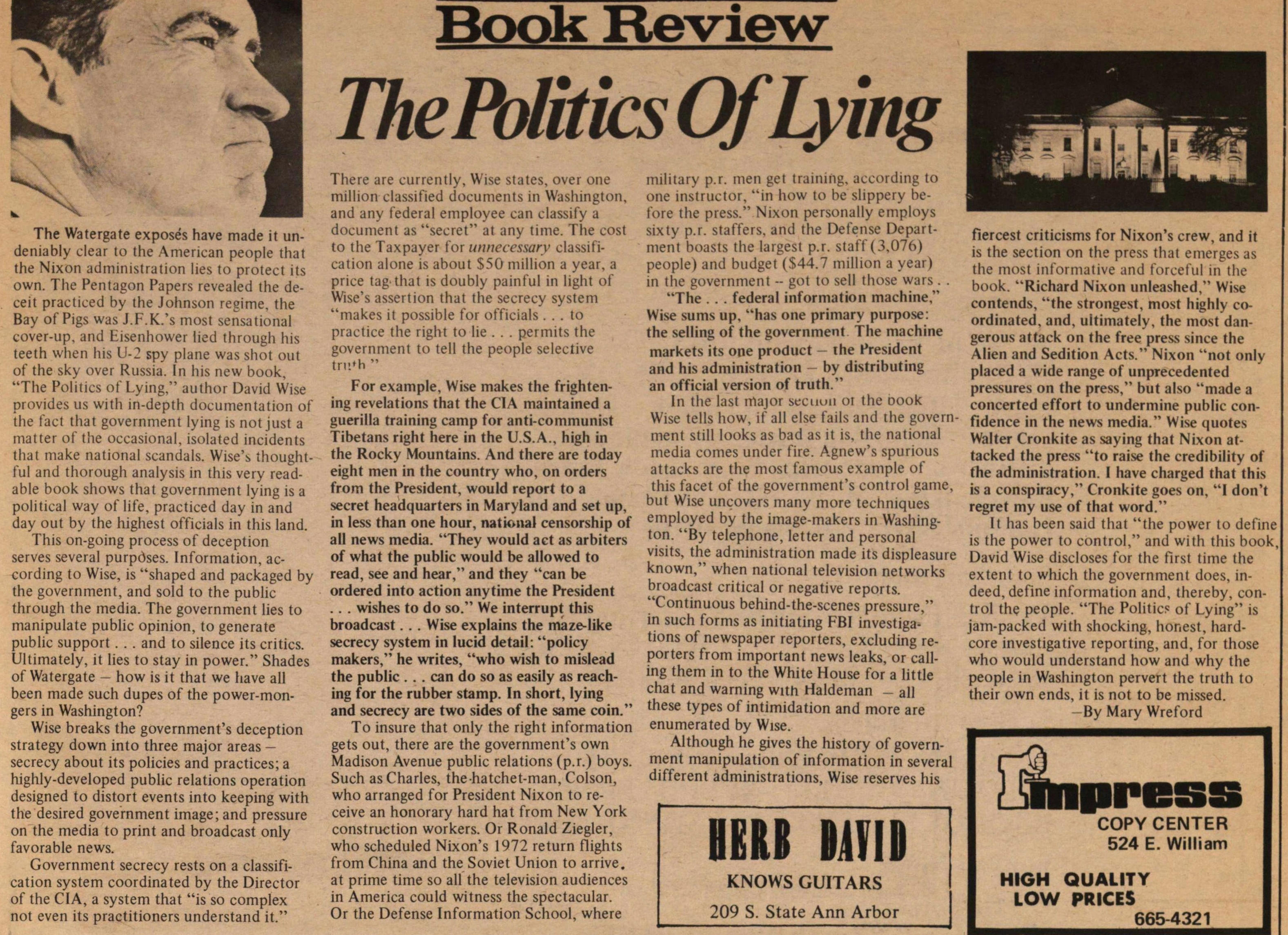 The Politics of Lying

The Watergate exposés have made it undeniably clear to the American people that the Nixon administration lies to protect its own. The Pentagon Papers revealed the deceit practiced by the Johnson regime, the Bay of Pigs was J.F.K.'s most sensational cover-up, and Eisenhower lied through his teeth when his V-2 spy plane was shot out of the sky over Russia. In his new book. "The Politics of Lying," author David Wise provides us with in-depth documentation of the fact that government lying is not just a matter of the occasional, isolated incidents that make national scandals. Wise's thoughtful and thorough analysis in this very readable book shows that government lying is a political way of life, practiced day in and day out by the highest officials in this land.

This on-going process of deception serves several purposes. Information, according to Wise, is "shaped and packaged by the government, and sold to the public through the media. The government lies to manipulate public opinion, to genérate public support...and to silence its critics. Ultimately, it lies to stay in power." Shades of Watergate - how is it that we have all been made such dupes of the power-mongers in Washington?

Wise breaks the government's deception strategy down into three major areas - secrecy about its policies and practices; a highly-developed public relations operation designed to distort events into keeping with the desired government image; and pressure on the media to print and broadcast only favorable news.

Government secrecy rests on a classification system coordinated by the Director of the CIA, a system that "is so complex not even its practitioners understand it." There are currently, Wise states, over one million classified documents in Washington, and any federal employee can classify a document as "secret" at any time. The cost to the Taxpayer for unnecessary classification alone is about $50 million a year, a price tag that is doubly painful in light of Wise's assertion that the secrecy system "makes it possible for officials...to practice the right to lie...permits the government to tell the people selective truth."

For example. Wise makes the frightening revelations that the CIA maintained a guerilla training camp for anti-communist Tibetans right here in the U.S.A., high in the Rocky Mountains. And there are today eight men in the country who, on orders from the President, would report to a secret headquarters in Maryland and set up, in less than one hour, national censorship of all news media. "They would act as arbiters of what the public would be allowed to read, see and hear," and they "can be ordered into action anytime the President . . . wishes to do so." We interrupt this broadcast...Wise explains the maze-like secrecy system in lucid detail: "policy makers," he writes, "who wish to mislead the public...can do so as easily as reaching for the rubber stamp. In short, lying and secrecy are two sides of the same coin."

To insure that only the right information gets out, there are the government's own Madison Avenue public relations (p.r.) boys. Such as Charles, the hatchet-man, Colson, who arranged for President Nixon to receive an honorary hard hat from New York construction workers. Or Ronald Ziegler, who scheduled Nixon's 1972 return flights from China and the Soviet Union to arrive at prime time so all the television audiences in America could witness the spectacular. Or the Defense Information School, where military p.r. men get training, according to one instructor, "in how to be slippery before the press." Nixon personally employs sixty p.r. staffers, and the Defense Department boasts the largest p.r. staff (3,076) people) and budget ($44.7 million a year) in the governmcnt -- got to sell those wars...

"The...federal information machine," Wise sums up, "has one primary purpose: the selling of the government The machine markets its one product - the President and his administration - by distributing an official version of truth."

In the last major section of the book Wise tells how, if all else fails and the government still looks as bad as it is, the national media comes under fire. Agnew's spurious attacks are the most famous example of this facet of the government's control game, but Wise uncovers many more techniques employed by the image-makers in Washington. "By telephone, letter and personal visits, the administration made its displeasure known," when national television networks broadcast critical or negative reports. "Continuous behind-the-scenes pressure," in such forms as initiating FBI investigations of newspaper reporters, excluding reporters from important news leaks, or calling them in to the White House for a little chat and warning with Haldeman - all these types of intimidation and more are enumerated by Wise.

Although he gives the history of government manipulation of information in several different administrations, Wise reserves his fiercest criticisms for Nixon's crew, and it is the section on the press that emerges as the most informative and forceful in the book. "Richard Nixon unleashed," Wise contends, "the strongest, most highly coordinated. and, ultimately, the most dangerous attack on the free press since the Alien and Sedition Acts." Nixon "not only placed a wide range of unprecedented pressures on the press," but also "made a concerted effort to undermine public confidence in the news media." Wise quotes Walter Cronkite as saying that Nixon attacked the press "to raise the credibility of the administration. I have charged that this is a conspiracy," Cronkite goes on, "I don't regret my use of that word."

It has been said that "the power to define is the power to control," and with this book, David Wise discloses for the first time the extent to which the government does, indeed, define information and, thereby, control the people. "The Politics of Lying" is jam-packed with shocking, honest, hardcore investigative reporting, and, for those who would understand how and why the people in Washington pervert the truth to their own ends, it is not to be missed.