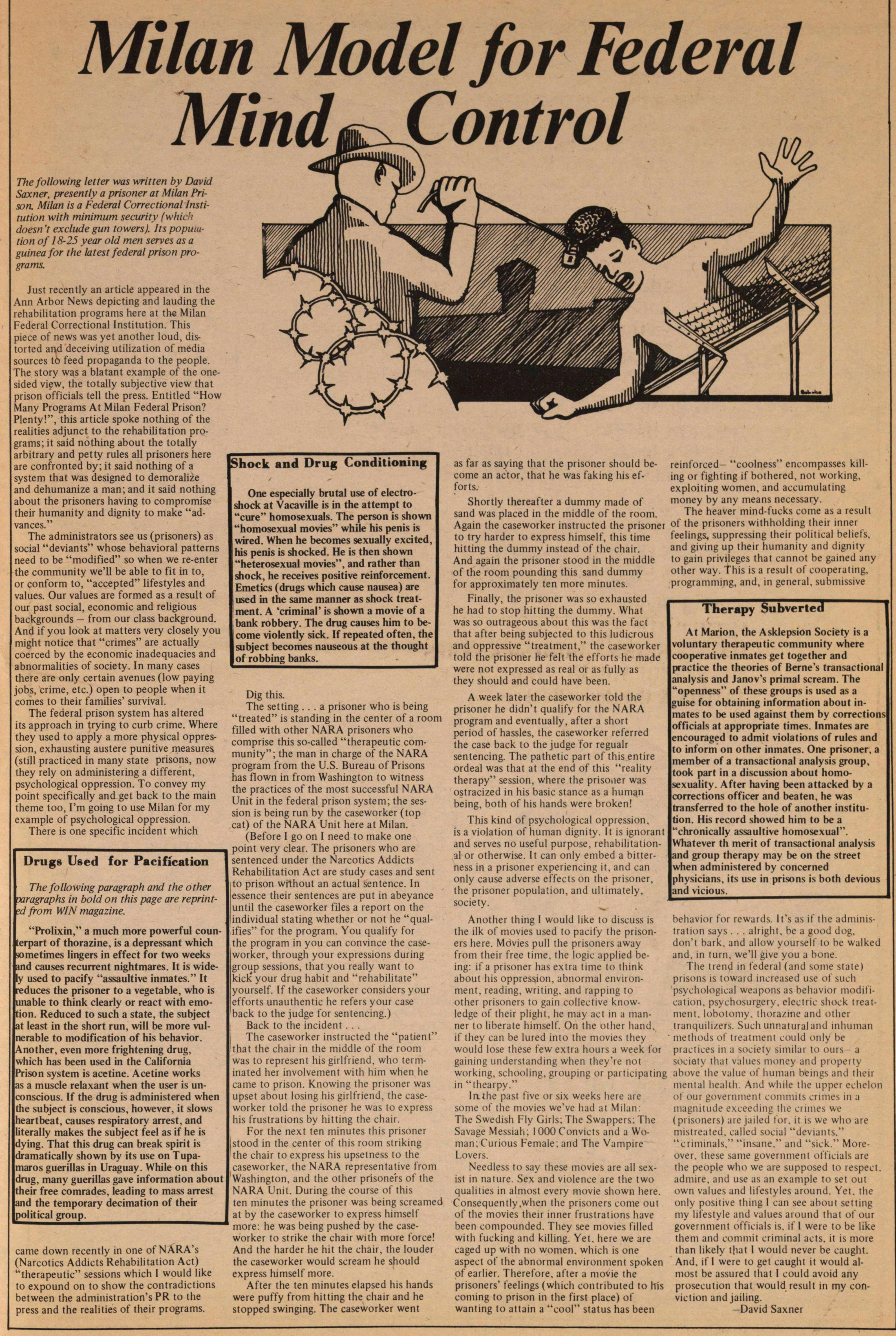 The following letter was written by David Saxner, presently a prisoner at Milan Prison. Milan is a Federal Correctional Institution with minimum security (which doesn't exclude gun towers). lt's population of 18-25 year old men serves as a guinea for the latest federal prison programs.

Just recently an article appeared in the Ann Arbor News depicting and lauding the rehabilitation programs here at the Milan Federal Correctional Institution. This piece of news was yet another loud, distorted and deceiving utilization of media sources to feed propaganda to the people. The story was a blatant example of the one-sided view, the totally subjective view that prison officials tell the press. Entitled "How Many Programs At Milan Federal Prison? Plenty!", this article spoke nothing of the realities adjunct to the rehabilitation programs; it said nothing about the totally arbitrary and petty rules all prisoners here are confronted by; it said nothing of a system that was designed to demoralize and dehumanize a man; and it said nothing about the prisoners having to compromise their humanity and dignity to make "advances."

The administrators see us (prisoners) as social "deviants" whose behavioral patterns need to be "modified" so when we re-enter the community we'll be able to fit in to, or conform to, "accepted" lifestyles and values. Our values are formed as a result of our past social, economic and religious backgrounds - from our class background. And if you look at matters very closely you might notice that "crimes" are actually coerced by the economic inadequacies and abnormalities of society. In many cases there are only certain avenues (low paying jobs, crime, etc.) open to people when it comes to their families' survival.

The federal prison system has altered its approach in trying to curb crime. Where they used to apply a more physical oppression, exhausting austere punitive measures (still practiced in many state prisons, now they rely on administering a different, psychological oppression. To convey my point specifically and get back to the main theme too, I'm going to use Milan for my example of psychological oppression. There is one specific incident which carne down recently in one of NARA's (Narcotics Addicts Rehabilitation Act) "therapeutic" sessions which I would like to expound on to show the contradictions between the administration's PR to the press and the realities of their programs.

Dig this.
The setting ...  a prisoner who is being "treated" is standing in the center of a room filled with other NARA prisoners who comprise this so-called "therapeutic community"; the man in charge of" the NARA program from the U.S. Bureau of Prisons has flown in from Washington to witness the practices of the most successful NARA Unit in the federal prison system; the session is being run by the caseworker (top cat) of the NARA Unit here at Milan.

(Before I go on I need to make one point very clear. The prisoners who are sentenced under the Narcotics Addicts Rehabilitation Act are study cases and sent to prison without an actual sentence. In essence their sentences are put in abeyance until the caseworker files a report on the individual stating whether or not he "qualifies" for the program. You qualify for the program in you can convince the caseworker, through your expressions during group sessions, that you really want to kick' your drug habit and "rehabilítate" yourself. If the caseworker considers your efforts unauthentic he refers your case back to the judge for sentencing.)

Back to the incident . . .
The caseworker instructed the "patiënt" that the chair in the middle of the room was to represent his girlfriend, who terminated her involvement with him when he carne to prison. Knowing the prisoner was upset about losing his girlfriend. the caseworker told the prisoner he was to express his frustrations by hitting the chair.

After the ten minutes elapsed his hands were puffy from hitting the chair and he stopped swinging. The caseworker went as far as saying that the prisoner should become an actor, that he was faking his efforts.

Finally, the prisoner was so exhausted he had to stop hitting the dummy. What was so outrageous about this was the fact that after being subjected to this ludicrous and oppressive "treatment," the caseworker told the prisoner he felt the efforts he made were not expressed as real or as fully as they should and could have been.

A week later the caseworker told the prisoner he didn't qualify for the NARA program and eventually, after a short period of hassles, the caseworker referred the case back to the judge for regular sentencing. The pathetic part of this entire ordeal was that at the end of this "reality therapy" session, where the prisoner was ostracized in his basic stance as a human being, both of his hands were broken!

This kind of psychological oppression, is a violation of human dignity. It is ignorant and serves no useful purpose, rehabilitational or otherwise. It can only embed a bitterness in a prisoner experiencing it, and can only cause adverse effects on the prisoner, the prisoner population, and ultimately, society.

Another thing I would like to discuss is the ilk of movies used to pacify the prisoners here. Movies pull the prisoners away from their free time, the logic applied being: if a prisoner has extra time to think about his oppression, abnormal environment, reading, writing, and rapping to other prisoners to gain collective knowledge of their plight, he may act in a manner to liberale himself. On the other hand, if they can be lured into the movies they would lose these few extra hours a week for gaining understanding when they're not working, schooling, grouping or participating in "therapy."

In the past live or six weeks here are some of the movies we've had at Milan: The Swedish Fly Girls; The Swappers; The Savage Messiah; 1000 Convicts and a Woman; Curious Female; and The Vampire Lovers.

Needless to say these movies are all sexist in nature. Sex and violence are the two qualities in almost every movie shown here. Consequently, when the prisoners come out of the movies their inner frustrations have been compounded. They see movies filled with fucking and killing. Yet, here we are caged up with no women, which is one aspect of the abnormal environment spoken of earlier. Therefore, after a movie the prisoners' feelings (which contributed to his coming to prison in the first place) of wanting to attain a "cool" status has been reinforced -  "coolness" encompasses killing or fighting if bothered, not working, exploiting women, and accumulating money by any means necessary.
The heaver mind-fucks come as a result of the prisoners withholding their inner feelings, suppressing their political beliefs, and giving up their humanity and dignity to gain privileges that cannot be gained any other way. This is a result of cooperating, programming, and, in general, submissive behavior for rewards. It's as if the administration says . . . alright, be a good dog. don't bark. and allow yourself to be walked and in turn, we'll give you a bone.
The trend in federal (and some state) prisons is toward increased use of such psychological weapons as behavior modification, psychosurgery, electric shock treatment. lobotomy. thorazine and other tranquilizers. Such unnatural and inhuman methods of treatment could only be practices in a society similar to ours a society that values money and property above the value of human beings and their mental health. And while the upper echelon of our government commits crimes in a magnitude exceeding the crimes we (prisoners) are jailed for it is we who are mistreated. called social "deviants." "criminals," "insane." and "sick."
Moreover these same government officials are the people who we are supposed to respect, admire, and use as an example to set out own values and lifestyles around. Yet. the only positive thing I can see about setting my lifestyle and values around that of our government officials is, if I were to be like them and commit criminal acts, it is more than likely that I would never be caught. And, if I were to get caught it would almost be assured that I could avoid any prosecution that would result in my conviction and jailing.
-David Saxner

The following paragraph and the other paragraphs in bold on this page are reprinted from WIN magazine.

"Prolixin," a much more powerful counterpart of thorazine, is a depressant which sometimes lingers in effect for two weeks and causes recurrent nightmares. It is widely used to pacify "assaultive inmates." It reduces the prisoner to a vegetable, who is unable to think clearly or react with emotion. Reduced to such a state, the subject at least in the short run, will be more vulnerable to modification of his behavior. Another, even more frightening drug, which has been used in the California Prison system is acetine. Acetine works as a muscle relaxant when the user is unconscious. If the drug is administered when the subject is conscious, however, it slows heartbeat, causes respiratory arrest, and literally makes the subject feel as if he is dying. That this drug can break spirit is dramatically shown by its use on Tupamaros guerillas in Uruguay. While on this drug, many guerillas gave information about their free comrades, leading to mass arrest and the temporary decimation of their political group.

One especially brutal use of electroshock at Vacaville is in the attempt to "cure" homosexuals. The person is shown "homosexual movies" while his penis is wired. When he becomes sexually excited, his penis is shocked. He is then shown "heterosexual movies", and rather than shock, he receives positive reinforcement. Emetics (drugs which cause nausea) are used in the same manner as shock treatment. A 'criminal' is shown a movie of a bank robbery. The drug causes him to become violently sick. If repeated often, the subject becomes nauseous at the thought of robbing banks.

At Marion, the Asklepsion Society is a voluntary therapeutic community where cooperative inmates get together and practice the theories of Berne's transactional analysis and Janov's primal scream. The "openness" of these groups is used as a guise for obtaining information about inmates to be used against them by corrections officials at appropriate times. Inmates are encouraged to admit violations of rules and to inform on other inmates. One prisoner, a member of a transactional analysis group, took part in a discussion about homosexuality. After having been attacked by a corrections officer and beaten, he was transferred to the hole of another institution. His record showed him to be a "chronically assaultive homosexual". Whatever the merit of transactional analysis and group therapy may be on the street when administered by concerned physicians, its use in prisons is both devious and vicious.